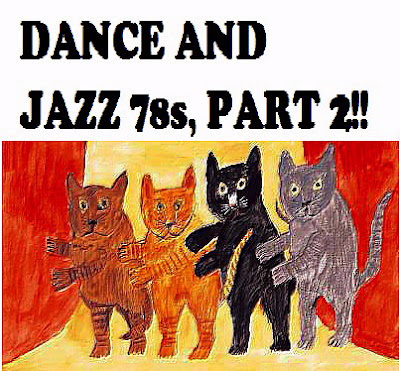 Nine 78-rpm tracks, all ripped and restored by me from my collection.  A subset of the Paul Whiteman orchestra, the Virginians performed arrangements by Ferde Grofe and Ross Gorman, and they tended to sound more Dixieland than the larger orchestra.  Less big-bandy, anyway.  I've always wanted to type "big-bandy."  Her Beaus... is one of bandleader Fred Waring's jazziest sides of the post-acoustical era, and my copy yielded a great rip (I think).  Possibly the coolest of the set is Joseph C. Smith's remarkable Money Blues, penned by Hugo Frey, who, far as I know, was Smith's chief arranger.  Though recorded in 1916, in style the side sounds more like 1922 or 1923.  Meanwhile, its aggressive percussion is something we would expect from James Reese Europe or Wilbur Sweatman, not a white society band known for its genteel approach to post-WWI pop!  Totally cool.  The flip side, I've Got a Shooting Box in Scotland (penned by Cole Porter), is a far more typical Joseph C. side, and, like most of his Victor tracks, is fantastically well played.  Ted Lewis' very fun and corny Queen of Sheba is way-early jazz--stylistically, it harkens back to jazz when it was just on the brink of becoming so.  When jazz was a kind of ragtime music with the parts going their own way, ad-libbing but not exactly improvising, being that the rules of jazz polyphony had yet to be codified.  Or whatever the heck I just typed.  Actually, the traditional jazz-historical verdict on Lewis is far harsher--as in, Lewis' music as an inept parody of jazz, vice the almost-jazz I think it is.

Footloose is better in Paul Whiteman's version, but Carl Fenton's is quite a kick, too.  Too bad they couldn't have gotten Billy Murray to sing this one, too.  Enjoy!