What a year! Church, VinylStudio

I'm doing a late year-in-review series at my rarely-used Text blog, because I know people want music here (understandably!) and not the cynical musings of Lee Whatshisname.  So, I'm putting them over there.  Except I seem to have lost my first post.  (What the...?)  It's no longer there.  So much for linking to it.

Maybe I only imagined I typed it.  This is crazy.  Oh, well.

In music news, the organ--a cool Thomas electric, circa 1970--has been fixed at the church where I'm volunteering.  I can't wait to hear it in its fixed state.  It had been sitting around for something like sixteen (!!) years before I warmed it up.  Most of the keys were working, but the volume pedal had major issues.  Then the thing started humming--loudly.

The repairman found frayed wires, and he had to either replace the volume pedal or do lots of work on it.  Anyway, Thomas was the brand used on the Lawrence Welk show, so that's good enough for me.  I always loved that organ sound.  All the rhythms have been deactivated, which is fine with me.  Nothing's quite as unnerving as accidentally activating a cha-cha beat in the middle of Blessed Assurance.  ("Blessed insurance, please pay on time...")

It's a very charming old (I mean, old) country church about a 20 minute drive from here.  And I thought I had an exterior-shot photo ready to post, but I don't.  (Maybe it vanished along with the Text post.)  Here's the inside: 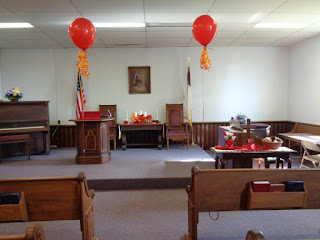 As you can see, it's a church.  (Not sure why the balloons.)  We have a massive congregation of about 30.  I must get an exterior shot, because the building is awesome looking.  I'll do that tomorrow, if it's not too overcast.

It was cool this year having Christmas on a Sunday--and, now, a Sunday New Year's.

Music news, Part 2: VinylStudio, my great new toy (received early from Santa) is giving me the kind of 78 rpm results I've always dreamed of.  After some practice, it's becoming almost second nature to modify playback curves to my liking--sometimes, all it involves is choosing the high and low freq. turnovers, though often it's more complicated.  But not much more.

Inverting the RIAA (LP) playback curve yields a far clearer signal, and from there it's a matter of using a preset (if one is there) or going from scratch.  It's not the time-consuming task I anticipated--I can usually rip and fix seven or eight tracks in one sitting.  Here are eight from the past few days:

Her Beaus Are Only Rainbows--Waring's Pennsylvanians, 1926

Happy new year, Lee, and thanks for the tunes.

I enjoyed the mental image of you adding a cha-cha rhythm to "Blessed Assurance."

Bob Ralston! Which I know only because I've seen so many of his Ranwood label LPs. The man could play the piano and organ.

Happy New Year to you, too!

Ah, yes - I kept thinking of Aladdin, but I knew THAT couldn't be right!

I think Welk had them all under contract, eh?

I hope not--I heard (through fairly reliable sources) that Welk paid all of his musicians union scale. I could be wrong, but that seems like him. He gave the Lennon Sisters loads of grief for succeeding on their own.

Myron Floren seemed like the anti-Welk--that is to say, a genuinely nice person.

There's much irony, or something, in the fact of a marginally talented celebrity like Welk employing so many top-flight musicians. I was surprised when my jazz musician dad, no fan of Welk, praised the band's skill, which is very evident to me now. Master your craft, and end up on the Lawrence Welk show. Yikes.

Yeah, what I meant is that Welk had a record company and many of his musicians and singers ended up on the label.