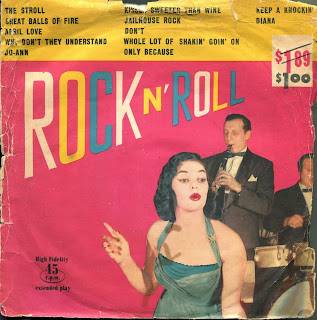 Well, the Variety label called it "rock 'n roll," and Promenade (this release, by the famous Synthetic Plastics Co.) called it "rock n' roll."  Of course, it's "rock 'n' roll," but that still leaves a couple questions unanswered--namely, what are April Love and Kisses Sweeter Than Wine doing here?  Besides taking up track space?

I think of myself as anything but a purist, but those two titles are about as rock n'/'n/'n' roll as, oh, Al Di La (the best version of which was waxed by the Ray Charles Singers.  Not that Ray, of course.)

And I *like* Kisses Sweeter Than Wine, ironically.  Even this version.

These are all fakes, of course--sound-alikes, back when you could swipe an arrangement and not get sued.  Some fine tracks--Jo Ann, The Stroll, Don't, Keep a Knockin', and, especially, Great Balls of Fire.  The passable copies include Diana, April Love, and Whole Lotta Shakin'.

Shed a tear for Jail House (sic) Rock, whose fabulous backing would have been infinitely better served by a singer who sounded remotely like Elvis.  And who put a little life into the proceedings.  Given a decent vocal, this would have been an all-time great fake.  Thanks a lot, "Eli Whitney."

And genuine thanks to the declicker filter on my MAGIX program, and to some tool-removed pops (mega-pops too big for the declicker to declick, these terrible pressings sound totally acceptable.

My parents bought these two EPs for my big sister. I was only 5 in 1958. They had long disappeared but not my memory of them. I tracked one of them down and the other I digitized from two other EPs that had the same songs on one side only, but together completed the RR 24 EP. Great childhood memories. I’ve always wondered about the “for hire” artists who recorded these. Wish someone had information on the label and how these people were auditioned and ended up on the records. Also, the names of these artists were probably not their real names. They would probably be in their late 70s at their youngest today, if even still alive, so their stories are probably lost in time.

This book https://www.amazon.com/gp/product/0692533648/ref=ppx_yo_dt_b_asin_title_o08_s00?ie=UTF8&psc=1 gives a lot of great background on the cheapies. Unfortunately, the author has no inside info on Prom and Promenade (except that Enoch Light started there and left in, I think, 1954), but he notes that the credits were all made up. So your suspicion is correct! Names like Eli Whitney and Sugar Beat sort of give that away. He also notes that many fake hits were traded between Promenade/Prom and Tops, which I'd been noticing for a while. The book's focus is on the rare sides available on the junk labels, but the author gives a lot of good general history. I've always suspected that a few outfits provided the masters for everyone. By the time Pickwick started to dominate, c. 1960, it seems like they were doing the lion's share of fakes.

The problem with Promenade's EP sets, as you likely know, is that they were edited down from their LP versions. I'll have to say they did a pretty expert job splicing the tapes. Rarely is there an obvious or awkward edit. Thanks for checking in!