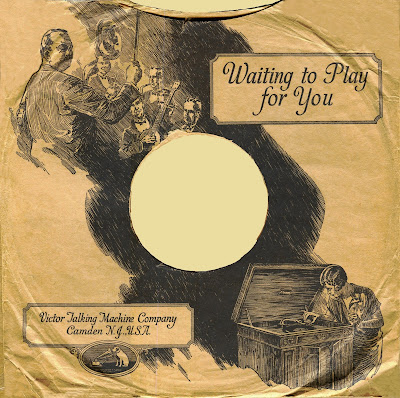 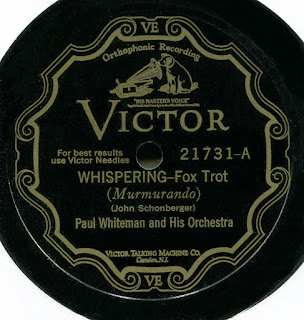 Buster, at Big 10-Inch Record, just put up ten Paul Whiteman tracks, providing me with an excuse to put up some of the 150 or so Whiteman 78 sides I ripped last year.  Here are twenty of them, nearly all arranged by the brilliant Ferde Grofe.  This I know because last year the arranger listings were still up at the Williams College Paul Whiteman Collection website--they're since been taken down, unfortunately.  The site notes that the PW collection is being "fully processed" next year, but I wish they'd kept up the info they had.  Oh, well....

Update: Ernie found the page in question on the Wayback Machine--"a digital archive of the World Wide Web and other information on the internet" (Wikipedia).  Link: Whiteman Collection.  The Wayback Machine reference is to the "Peabody's Improbable History" segment from the Rocky and Bullwinkle Show.  I grew up on the show, but I don't know how familiar with it young'uns are or aren't.  (Please take "young'uns" in context--I'm 61.  And I've probably watched too many Waltons episodes.)  So, thank you, Ernie.

This set includes the electrical-era remakes of the huge 1920 Whiteman hits Whispering and The Japanese Sandman, in new (1928) Ferde Grofe arrangements.  Both charts are exceptionally well done, imo.  And we have Ben Selvin masquerading as Paul Whiteman on the Columbia label (What D'Ya Say?)--I think I knew the story behind that at one time, but if I did, I've forgotten it.  Bing Crosby's voice can be heard on a number of these, but he sings lead only on the first--Irving Berlin's Sunshine.  Standing out like a sore thumb, stylistically, is 1925's The Kinky Kids Parade, which is every bit as racist as the title suggests.  It doesn't sound especially Whiteman--I've heard nearly everything recorded by Paul, and I don't know I'd have identified it as him in a blindfold test.  Meanwhile, I've seen the Dancing Shadows arrangement credited to both Grofe and Tom Satterfield, and I tend toward Grofe, though my ears are not positive.  (Come on, ears.  Get with it.)  And I was a major fan of that eccentric soap opera.  Yup, ran home every afternoon to catch it.  (No, wait--that was Dark Shadows.)

I may or may not be the first music blog (er, blogger) to feature That Saxophone Waltz.  I really like it.  The superb Whiteman band musicianship probably has a lot to do with that, plus Grofe's ultra-smooth arrangement, plus the lovely vocal chorus (trio?  quartet?  I'd have to listen closer to discern).  Or maybe I just have corny tastes.  Nah.  That can't be.  Anyone who has followed my blog for a while knows I despise corn.  (Sound of tin cans crashing.)

Anyway, these were all ripped by me from my Whiteman 78 collection, the response curves chosen on my VinylStudio software, and the declicking performed on both my VS and MAGIX programs.  Enjoy!

Paul Whiteman and His Orchestra

Posted by Lee Hartsfeld at 3:05 PM

Is that supposed to be Whiteman on the sleeve? Looks as much like Grover Cleveland.

Maybe Grover was standing in for him. (No, wait--Grover was dead.)

Yes, it is a pretty lousy likeness. Reminds me of one of the regular Mission: Impossible villains. Looked him up--Ron Feinberg http://www.aveleyman.com/ActorCredit.aspx?ActorID=33871

Now we're back where we started!

Grover Cleveland Alexander Feinberg. That's it. Easy to recall that guy because he always looked like he had just been off screen suck on a lime.

And a plethora of Whiteman this week is a wonderful thing. Thanks, Lee. I'll give a listen and see how many voices my ears detect.

Just a thought, but have you tried the Wayback Machine to see if their old Whiteman info is still around?

Not sure exactly where to look, but they do show a lot of old archives of the site.

Much harder than I thought, but I think this may be the missing site.

Was that it? They don't show a whole lot of info there, so I wasn't sure if that's what you were after. Really hard to find anything on that archive site unless you know exactly what the URL was before.

That was precisely the page I needed. Thanks!

Great transfers! I intend to send my loyal readers over here as soon as I get a chance.

Cool. And thanks for the compliment! My VinylStudio software has a number of pre-set curves, one of which--the 1925 curve for Victor--I tweak as needed.

I wonder if any of you guys can provide me with this: Paul Whiteman And His Orchestra ‎– Hawaiian Magic (Accent On Strings)
[https://www.discogs.com/Paul-Whiteman-And-His-Orchestra-Hawaiian-Magic-Accent-On-Strings/master/898049]
I'm looking for it for months now, but it seems that it is nowhere around on the net.

That's one of the few Whiteman records I never had a copy of. Maybe one of my readers can help.

I've seen that Hawaiian one before, and probably have a copy of it around here somewhere, but I couldn't lay my hands on it if I had to. If I see a new copy, I'll snag it and do something with it. :)

Nevertheless thanks for your effort. By the way I've never listened to it before, I want it mainly for the Hawaii topic, and I think Whiteman and Hawaii together can't be so wrong. Anyway, thanks for all the music!

Thank you very much! What a treat! Can't wait to listen to the all the Whiteman music.