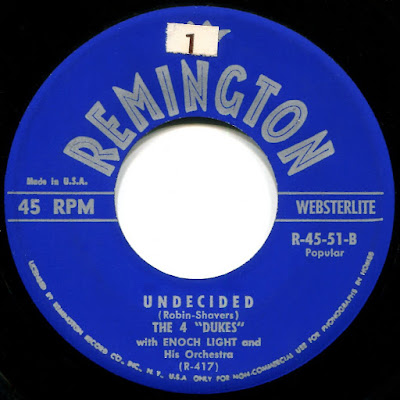 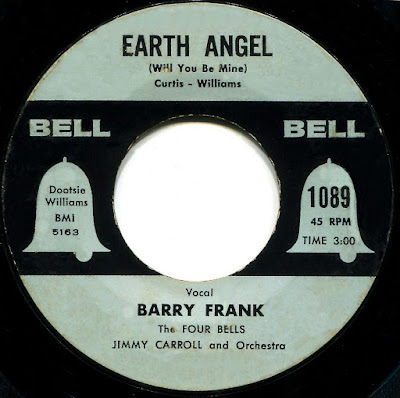 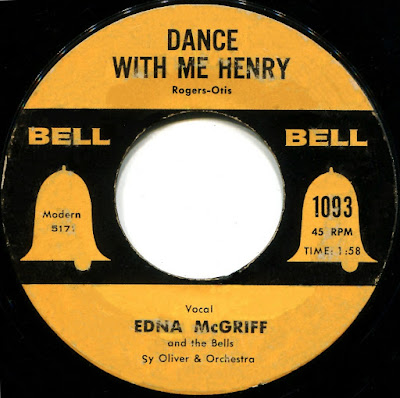 Seven tracks today, all worth a spin.  Two "pop" numbers, an R&B novelty, and four early rock and roll numbers.  All fake versions, but you can't have everything.  As far as fakes go, these are the real thing.

Think of this group of singles as an appetizer before the 24-track Waldorf LP to come.  Today we have Enoch Light on the Remington label with two outstanding 1951 numbers--(It's No) Sin, and one the best-ever semi-novelties, Undecided.  Written in 1938, Undecided, unable to decide which artist it wanted to be associated with, went through a number of versions, but this is the most successful of them all--or, rather, a fake thereof.  Specifically, this is (are?) the 4 "Dukes" faking the Ames Brothers.  And "The 4 'Dukes' faking the Ames Brothers" sounds like a specialty restaurant item.  ("I'll have the 4 'Dukes' faking the Ames Brothers, please.")  1952's Hambone, also on Remington, is unfortunately not a fake of Red Saunders' dynamite R&B version, but it is a very nice cover of the Frankie Laine-Jo Stafford pop version.  It may even have slightly more drive.

Today's Barry Frank and Edna McGriff offerings come from eBay miscellaneous-singles lots, and they were played extensively by their previous owner(s).  And not gently.  But I got more than adequate fidelity, and I made the labels look halfway nice, and the tracks were worth the effort, so I'm cool.  If you ask me, at least.  Neat to have some very early Barry Frank, though a little weird to have R&B singer McGriff singing the sanitized "pop" version of Work with Me, Annie, which was retitled Dance With Me, Henry for Georgia Gibbs (dunno if it originally had a comma or not).  No, wait a minute--it was Etta James' Wallfower, an answer song to Annie, that became Dance with Me, Henry.  My bad.  So, to sum things up, Wallflower was an answer  record to Hank Ballard and the Midnighters' Work with Me, Annie, an R&B hit in the R&B category known as "dirty," and Dance with Me, Henry (which really seems like a cleaning-up of Work with Me..., but what do I know?) was a family-friendly redo of Feelings.  No, wait.  Heck, I forgot what I was typing.

Okay, Edna is doing a fake of Georgia Gibbs covering Wallflower, and imagine how all this would sound if I really was on my seventh Pabst.

The original Hank Ballard side, by the way (Annie...), has Beach Boys-style "ow-ooms" in the backup vocals--another reminder that nothing is original.  Actually, a possibly little-known fact about surf music is that it stemmed from black rock and roll, going back to the late 1940s.  As for Barry Frank's versions of Earth Angel and Ko Ko Mo, I hate to report that they have nothing like the feel of early rock and roll ("early," in this case, referring to the time of r&r's entry into the pop charts).  But they're interesting as history.  That's my usual cop-out line at moments like this.  I'd go so far as to suggest that they're interesting in their wrongness.

Barry Frank had definitely not yet found his rock and roll groove in 1955, but, as demonstrated by the tracks shared by Eric (last post), he improved considerably within a few years.  And I wanted to express my annoyance with too many rock documentaries that treat rock and roll-era white adults as deluded for imagining that songs like Work with Me, Annie were obscene, because such songs banked on their (ahem) impropriety.  It doesn't take a celebrity-scientist gig on Cosmos to realize that ballads like Annie and Sixty-Minute Man were, as the modern term goes, adult-themed.  And sex-without-romance songs were not a welcome tradition in the "pop" realm.  Having said that, plenty of "crossover" r&r ballads weren't the least bit suggestive--Earth Angel, for instance.  My point?  Beats me.  Enjoy the fake-hits appetizer!

Posted by Lee Hartsfeld at 8:28 AM

Quite the curious selection this time around, Lee. Thanks! :)

Thanks, Lee for posting these. Please pass on to Eric that I am glad he shared his collection of Barry Frank. I have never heard of him, but he is quite good. I am glad you added something from him too. Bryan

Ernie--Thanks for stopping by. And yes, it is pretty... eclectic. (Does anyone use that word anymore? It was once all the rage. (-:)

Bryan--You're welcome. The sort of common thread of this post is that these are all early examples in their own right. In the case of Enoch Light, his side is right around the point of his entry into the vinyl era, and of course the two Frank sides are from the period when the cheapies had to contend with (and figure out) rock and roll....

Anon (if you'll excuse me using the familiar), you are welcome. I had a small collection of scratched up Bell 45s which I must have found at a yard sale. Someone in Europe was releasing this collection and upon release sent me CDs. I was interested in Barry Frank because I knew him from the Catskills (think Dirty Dancing and Sweet Lorraine) and collected whatever recordings I could find of my friends and colleagues. Most of that collection is not digitized yet, so I am offering a smattering of obscure recordings I found on the internet. They are not representative of what they used to sing in the 'mountains' but still might appeal to the curious.
https://mega.nz/file/614HCZDS#KMEUPcSpC2sVX7ywjJGyVZRkoGBI37sfxZlp-lobwik