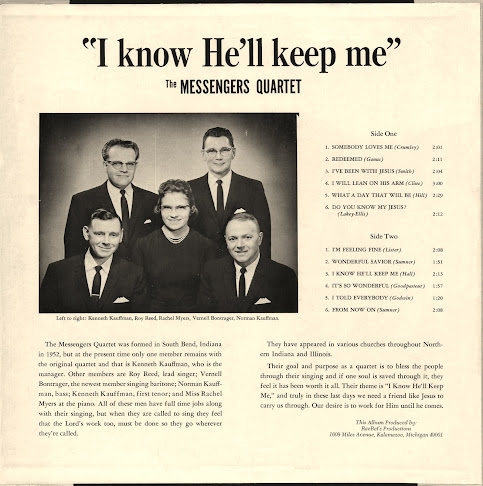 I very nearly had this ready for this morning, but it didn't happen.  So... here's my Sunday evening gospel post, to be enjoyed whenever you wish.  The Messengers Quartet, which formed in South Bend, Indiana, performed in Northern Indiana and Illinois, the liner essay tells us, and this is especially interesting, given their somewhat Appalachian sound.  My ears hear a blend of southern and "mountain" gospel, and it's not stretching things to imagine the Appalachian sound coming up from Kentucky into Indiana (as it has into Ohio).  Not for me, anyway.  You may not hear the sound of the hills that I'm hearing, but the opening track had me thinking of the Carter Family and the Chuck Wagon Gang, despite the group's all-male makeup.  (Rachel Myers, posing in the center, was the pianist.)

A nice group of familiar songs, many of them lively, and all of them performed with conviction.  Redeemed, by James Rowe (words) and S.A. Ganus (tune) may be the oldest of the selections, though I can't say for sure--it's in a number of my songbooks and hymnals, but none of them gives me a year, though I know it goes back at least to the 1920s.  Redeemed is a classic example within quartet singing of a solo voice "answered" by the remaining three voices, which function as "echoes," to use a common term.  It's a type of call and response that goes back to the 19th century (1868's In the Sweet By-and-By, for ex.)--a brand of antiphony.  In the close harmony version of Redeemed, the "lead" (second tenor) handles the melody, with the bass, baritone, and first tenor singing the response chords (with the first tenor harmonizing above the "lead," to make life more confusing).  Here it is on line, notated for male quartet, complete with the so-called "tenor" clef symbol in the top staff.  That symbol instructs the singers to treat the upper staff as the treble clef, only down one octave.  Widely used in old tunebooks and songbooks, it was not the official tenor clef, and I guess it was a way of saving on ink, since it was an alternative to this:

All of that was just to demonstrate that close-harmony gospel singing didn't spring up overnight, that it has its "roots."  Which I figure you already knew, but...  This LP was produced by RaeBet's Productions in Kalamazoo, Michigan, and Michigan is another place where a lot of Appalachian folks settled--such as, in Detroit, for obvious reasons.  Again, maybe the Appalachian sound is all in my ears, but I swear The Messengers (who are called the "Messenger's" on the label) have a "mountain" sound to them, at least in part.  Mixed with other influences.  Well worth a download, despite the not-so-hi-fi sound quality (which has me thinking this is from the 1960s--that, plus Rachel's hair), which I compensated for with a slight treble boost.  (The sound, not the hair.)  Another fine gospel thrift gift from Diane.
In my ID tag I  went with the label's misspelling of Ralph H. Goodpasteur's last name (as "Goodpastuer"), whereas I used the correct spelling below.  I was undecided when I labeled the track, because it seemed that, if I corrected the spelling, I'd be offering an inauthentic document of the LP and its contents.  Tough decision.  Same thing with "Messengers" vs. "Messenger's."  These are the agonizing issues music bloggers sometimes have to struggle with... behind the blog.  ("Behind the Blog" theme music, fade.)  But, seriously...

Somebody Loves Me (Crumley)
Redeemed (Rowe-Ganus)
I've Been With Jesus (Smith)
I Will Lean on His Arm (Cline)
What a Day That Will Be (Hill)
Do You Know My Jesus? (Lakey-Ellis)
I'm Feeling Fine (Lister)
Wonderful Savior (Sumner)
I Know He'll Keep Me (Hall)
It's So Wonderful (Goodpasteur)
I Told Everybody (Godwin)
From Now On (Sumner)

You lost me there with the tenor clef bit, but it's been a long time since I've tried to sight read any music. :)

Lee,
Thanks for this interesting album. I'll have more to say later (got family in this week), but I will comment right now, on Redeemed. I've always heard that song, in a male quartet, as a Tenor lead on the chorus and in a mixed conglomeration (congregation, choir or mixed quartet), an Alto lead on the chorus. Is that what you mean with the Tenor Clef, etc? Also, it appears (to my ears anyway) that, there is some lead switching around even more than normal, on this version anyway. Going for now, so 'til later, thanks again, love and prayin' for ya!

I'll have to listen more closely to the recording, as far as voice-swapping goes. As notated in close harmony, the melody goes to the lead (second tenor). In SATB form, the melody goes to the soprano, at least in the songbook I'm looking at right now. I was talking about the way close harmony is printed--in two staves, with an "octave treble clef" sign in the upper staff, which instructs the singers to sing an octave below. In the 19th century, and well into the 20th, tunebook and songbook publishers used that weird symbol I showed--the one that looks like a big asterisk enclosed by two vertical lines. It took me years to figure out what that symbol meant, and luckily one of my tunebooks explains it in the forward. Music publishers of the past were trying all kinds of shorthand methods of notation--including, of course, shape (or shaped) notes. I think they could have saved a lot of time by simply teaching average folks how to read proper notation! Anyway, and needless to say, in "close" harmony, the voices are literally very close together--to the point of overlapping on a regular basis. Separating male voices (BBTT) into two staves with two lines apiece made for much easier reading, so long as the singers understood that the top staff was an altered treble clef. Nowadays, close harmony is notated with so-called octave treble clefs in the top clef. For male voices, there's an "8" under the G clef, and for female voices, the 8 is above the clef. I wish I knew any of the history behind the old-fashioned "tenor" clef, since it has nothing to do with the real tenor clef--i.e., the one used for orchestrations.

I hope maybe I made things a little clearer with my answer to Josh. In my post essay, I should have noted that my comments relate to close harmony, strictly. SATB harmony uses the treble and bass clefs and is sung as written. I've come across different definitions of "close" harmony--some sources define it as when the total range of voices (parts) doesn't exceed an octave, which is definitely wrong. Others define it as when the upper three voices (not counting the bottom note) remain within one octave, which is far more reasonable. The Harvard Dictionary of Music confuses "close" with "closed," simply proving that Harvard doesn't care about vernacular music practices. To me, "close" simply means that--it means the voices are happening within a constricted range. Voices which aren't spread out, as they are when the male and female vocal ranges are combined.

Oh and I meant SATB, when I said mixed conglomerations. I can't read music (kinda hard to do it, with my blindness LOL), but IMHO, Jess (my wife) is excellent at it and a great pianist and singer as well, but I am a little biased LOL! 'Til later, love and prayin' for ya!