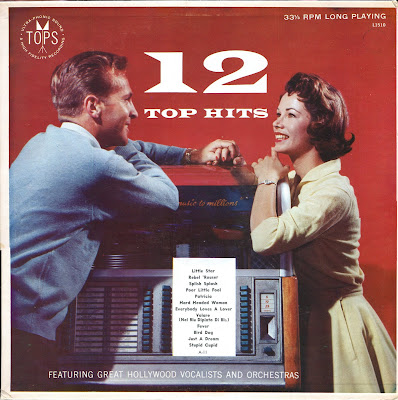 From the Tops label, twelve fun cover versions of current (1958) hits, and I'm almost sure that's Mary Tyler Moore on the cover, but I'm trying to confirm this on line in case I'm wrong.  She appeared on some other Tops jackets, anyway.  Sure looks like her.  This particular cover photo was reused several times in the 12 Top Hits series, each one bearing the same catalog number (1510) but with different track listings in the handy white rectangle.  These cheapo labels always went the path of least labor.

Well, this isn't listed anywhere as being one of Mary's LP jackets, but I could swear it's her.  The hair, the big teeth.... Then again, her eyebrow mascara isn't thick, as in the other Tops MTM jackets.  'Tis a mystery.

I could swear it's her.

Some flat singing (as in the interval) on Everybody Loves a Lover, and some all-around-the-pitch singing on Fever, plus some awful harmonizing on Just a Dream (though the Jimmy Clanton original had pretty off-key backing vocals).  The rest of the tracks, however, are well done, or at least better.  The copy-cat tracks on Tops were pretty hit or miss, ranging all the way from memorable to ouch!  And, speaking of Fever, somewhere Merv Griffin claimed he was offered the song but passed, and then Peggy Lee got it.  God's honest truth.  But, of course, I can find no confirmation on line.  This is not my night for on line confirmation.  I do know that Merv made a Fever-style number in 1963 called Hey Pretty Baby (Cameo 266).

Best track?  By far, Scott Otis' Hard Headed Woman.  Not sure there was an actual "Scott Otis"--probably not.  This version is familiar, showing up on (among other cheapie collections) the Halo label Tops in Pops series.  Why was Tops trading tracks with the Record Corporation of America?  Or was there a common source for both labels?  Questions like this keep me up at night.

Posted by Lee Hartsfeld at 9:27 PM