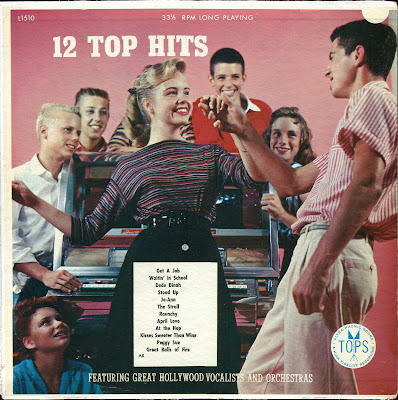 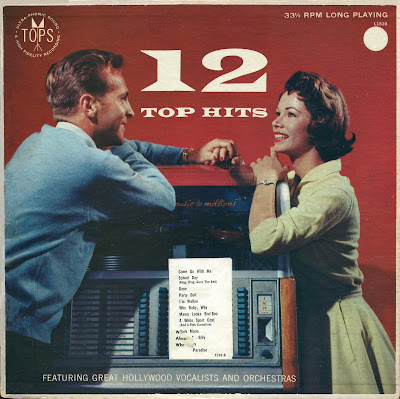 Yes, 24 "Top Hits"--actually, two 12 Top Hits LPs.  You'll notice that both have the same label and catalog number--Tops L1510--but sport different tracks.  You may notice in addition that the second LP (which I've numbered 3 on the zip file) features the exact same Mary Tyler Moore (?) photo from two posts ago, with a different track line-up (in the reusable white rectangle).  How to tell these things apart, then, issue-wise?  My best guess would be the numbers that appear on the L1510 labels--e.g., L1510-A-8 and L1510 B-7 on the first disc above.  Meanwhile, we see "A8" on the front cover track listing.  On the second LP above, we see 1510-G.  This doesn't suggest a consistent system of cataloging on Tops' part, and I don't even know if these digits and letters actually tell us where a given L1510 falls in the L1510 catalog.  And you thought record collecting was a piece of cake.

There may be some way of determining in what order these things were released, and I may figure it out sometime.

And I just noticed that the torn label on the second LP is a paste-over--we can see part of the originally printed track listing where the tear occurs.  Cheap labels took great pride in product quality.

These fake versions of then-current hits are a lot of fun and well worth listening to--even the misfires are entertaining, if only because the duds tend to be fascinatingly off the mark.  I'm thinking mainly of Peggy Sue and Great Balls of Fire, and maybe Rock-a-Billy, the last title featuring a singer who was no Guy Mitchell.  And the Peggy Sue vocalist's attempts to emulate Buddy Holly's style have me wondering why even a five-cent label would considering keeping the take.

However, the rest of the tracks range in quality from pretty good to astonishing so (Waitin' in School, At the Hop, The Stroll, Almost Paradise).  Get a Job is an amazing track, too, if only because the vocalists (The Toppers, yet again) were able to keep up with the tempo.  Slowed down a little, this would have been a terrific cover.  Come Go with Me is a let-down, though no disaster.  Dark Moon is quite affecting, though I haven't heard the Bonnie Guitar or Gale Storm originals for comparison.  It's certainly done with unusual care for a cheap knock-off.

Posted by Lee Hartsfeld at 6:43 PM

This sort of LP for me usually has several tunes I don't know by title but, once I hear the song I think "Yeah, I remember that when I was a kid." I can share this with my 82-year-old Mom, she'll them enjoy very much. Thanks, Lee!

There are only three or four I would have known from childhood--the rest I know from record collecting, such as "Rock-a-Billy" (I became a Guy Mitchell fan when stationed in Scotland). My brother had "School Day" (or is it "Days") on 45, and I wouldn't have known about Chuck Berry except for that. I'd have known Berry as the "My Ding-a-Ling" guy. I had little exposure to early rock. Just knew that my Dad hated it with all his soul.

Were these issued as a double pack then if they have the same number of issue? like some of the double ep sets.

I'm also wondering why they had Tops (Australia) releases?

I don't know for sure, but I'm guessing that, yes, this LP was also issued as a Tops double-pack ep set ("Top Hit Tunes"). Don't know about the issue number--I assume it would be different for the 45 rpm edition.

Don't know, either, if there were Aussie Tops editions. Interesting question! It wouldn't surprise me if there were. I did a quick check at the Tops page at http://www.bsnpubs.com and found nothing regarding non-U.S. issues. The only foreign budget releases that come to mind are French editions of Bell label recordings and U.K. issues of material from the Crown family (Kent, United, etc.). Anything's possible!

Thanks for the artist info. A lot of Tops stuff was simultaneously issued on Synthetic Plastics Co. labels like Prom and Parade, where artist credits were often different. I believe many Tops tracks showed up on Crown, too. Very confusing.