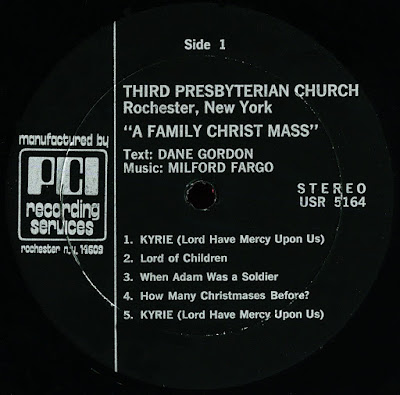 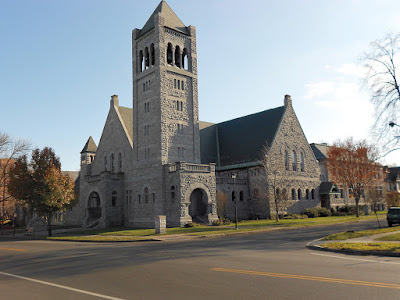 From a local Goodwill, a two-LP set housed in a single jacket with a booklet enclosed--a Christmas Mass with music by the late Milford Fargo, who was an associate professor of Music Education at the Eastman School of Music.  Fargo was a close friend of Alec Wilder and conducted Wilder's Children's Plea for Peace on the Turnabout label.  Fargo's Mass was recorded at the the Third Presbyterian Church in Rochester NY on Dec. 24, 1972

The text is by Dane Gordon, who apparently is still with us, and who a Google check identifies as an emeritus professor of philosophy from Rochester Institute of Technology and a retired Presbyterian minister.  Gordon was born in London and served in the Royal Navy during WWII.

This was the most complicated ripping and labeling task I can recall.  To get the track info and artist credits as close to correct as possible, I had to consult the booklet provided, the labels, and the back cover for any inconsistencies or omissions.  In the final band on Side 4 (the Agnus Dei), five titles flow together without a break, so track-marking was tricky.

The Kyrie ("Lord Have Mercy Upon Us") is probably my favorite part--simple but moving.  Don't be thrown off by the brass when it enters in another key--that's intended as a modern touch.  I think.

As Gordon points out in the booklet, "The mass is traditionally divided into Five parts: Kyrie Eleison, Gloria in Excelsis, Credo, Sanctus, and Agnus Dei."  So the booklet lists all five in all-caps, with no subtitles.  The labels, deciding not to cooperate, use all-caps and subtitles, except for the Credo, which isn't all-caps and has no subtitle.  A small deviation, but enough to throw things off.

From Wake Up Early: "Take a photograph.  Leave yourself out of it.  Take a photograph when nobody is there.  Jump down an oil well.  Wait for tomorrow.  The glory of God is the bite in the air."

In the notes, the author explains, "A Family Christ Mass is an attempt to present this ancient form of worship with contemporary ideas and music of many styles.

"Christ was interested in the details of his everyday life.  This Mass touches upon details of today's life using words and music that are intended to relate to all members of a family."

I'm too tired to argue.  Because there are two LPs and a slew of scans, I broke things down into three zips.


No way I'm listing all the titles!  Please consult scans....

Posted by Lee Hartsfeld at 9:33 AM

Sounds like the music will be enjoyable, but the words will be mystifying. One out of two isn't bad.

Well now, this looks different... :) Right up my alley!

Interesting. Thanks Lee.
Now that I'm caught up with Ernie, for a few hours anyway, time to visit all the other Christmas blogs. That way I'll have Christmas music to last the year through. For me, Christmas music is a genre, not a season.

Indeed Dane is still living, although facing many health challenges. My husband and I and 2 sons sang in that presentation. It was wonderful and we still remember parts and reminisce about it. Can I hear it from your site, My email is Kramsay80@yahoo.com.
Thanks, Kay Ramsay
Please use google and yahoo email to respond

My husband and I and 2 sons sang in that presentation.....and still reminisce about it. Dane is still living, but struggling with health issues.
Please also send response to kramsay80@yahoo.com

Kay, Thank you very much for letting me know. I'll get in contact with you soon. Very sorry to hear about Dane. I'll be in touch soon. Best,

Hi, Lee. Thank you so much for doing all the work involved in putting all this up! I am Scott Ramsay, Kay's oldest son (of 4).
She is not quite correct- my parents did sing in the chancel (senior) choir, but I and my brothers did not sing, although I believe I was there for much of the group rehearsals and came to know the music as if I had, and remember most of it to this day. (I was 9 or 10)
I had been searching for the past few years for this audio. We originally owned the LP's, but they were accidentally discarded.
I had actually talked with Dane Gordon about the Mass at church (I currently attend 3rd and have been singing with my parents in the choir for about 12 years), and if it ever had or will be done again- it doesn't seem so, sadly.

I was also going to borrow his LP's and get them copied, but never got around to doing so.

I personally think the music and the message in the Mass is great, and the melodies have stayed with me all these years. I also found a copy of the score which my parents had used.

This music truly fits into your category of something you would never hear. But I don't completely understand why that is the case. Unfortunately, I have been made aware of murky and undocumented controversy or scandal (I have heard specific accusations which I will not repeat) revolving around the composer, Milford Fargo, who went on to write a couple more commissioned musicals for our youth groups- that I and my brothers did participate in- the 1st being, "Pilgrim"- based on "A Pilgrim's Progress". I have the sense that he seems to have partially become 'persona-non-grata' in the Rochester music world (for possibly deserved, or undeserved reasons- I don't know). I do not know this for a fact.
I feel it is unfortunate (and that it is unfortunate for Dane Gordon) that an otherwise deserving work seems to have been permanently relegated to obscurity- or less.

Hi, Scott. Sorry I haven't gotten back to Kay yet--crazy day (and night). I should be asleep, and I hopefully will be in a short while. Fascinating info, and so sorry to hear about Fargo's fate. Quite depressing, as I loved this work. My late foster mother was an English prof at OSU, and she told me it took a special genius to write for young readers. I think ditto for young musicians. So much of this reminded me of Ralph Vaughan Williams' "Hodie," but I'll have to finish the thought later. Will get back to you. Feel free to email me (my link should be up in my profile), and I'd be more than happy to send you the record if you wish. Just say the word. Best,