Sunday post-morning gospel: The Sons of the Gospel--He Will Save Your Soul Yet 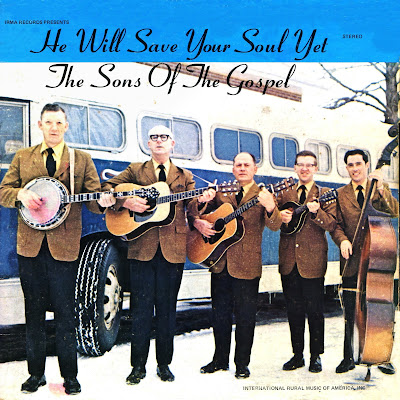 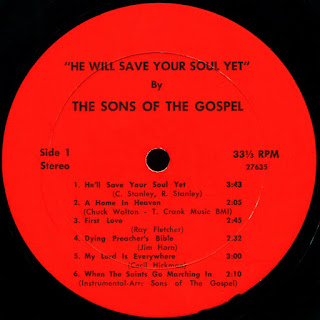 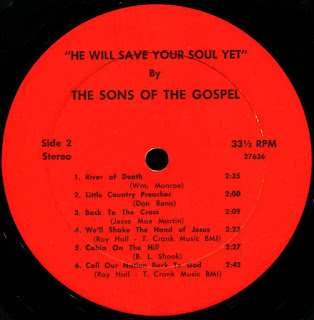 I'd like this LP even more if it were The Songs of the Gospel by the Sons of the Gospel.  That would be classic.  But it's He Will Save Your Soul Yet, which is a slightly unusual title, but one that makes sense when you hear the number it's attached to.  Three originals by band members, with the rest by folks like Wm. (I'm assuming Bill) Monroe, the Stanley Bros., and Don Reno.  Notes: "Our group is made up of five God-fearing, born again Christmas men serving the Lord in the old fashioned way.  We sing and play 'Blue Grass' gospel music; the kind we were all raised by."  I think they mean "raised on," and they are definitely Bluegrass gospel--one look at that nicely-posed cover photo tells us as much.  As for "the old fashioned way," for that to be fully true, they'd have to be wearing clothes of an earlier period, but I just have fun harping on that point.  "Old fashioned" is being used here to mean honest, genuine.

Excellent stuff from an LP played a lot by the previous owner, and I almost got it posted last week, but not quite.  I was to the wire, and I decided sleep was more important than finishing the entry.  Then, when I got home, I was tired.  Just like today.  This bug is doing a good job postponing its exit, but I think I can get rid of it before it becomes something worse.  My tactic is simple: when my body wants to sleep, I let it.  I assume it's my immune system needing a recharge.

I should know where Galion, Ohio is, but I don't.  So many towns in Ohio.  We have so many towns and villages in my state, I think the whole town concept was invented here.  Hm.  Not terribly far from here.  Around Mansfield.  At first, I thought the band members were all from Ohio, but in fact the back-jacket notes (included in the zip file) simply say they resided here.  Chuck Walton, who wrote A Home in Heaven, was teased by the group for being the only "Buckeye," meaning everyone else was originally from outside of Ohio.  Not surprising, since this is a bluegrass group.  When you see the back jacket, you'll note that its group shot is posed far less artistically than the front pic--maybe the shot is from a different session.  I'd almost guess a different photographer, given the elegant positioning of the members on the front.

I'll leave you at the mercy of the label scans for the track listings, as my head is feeling woozy.  I'm not up to typing out the titles (I'm about medium woozy).  We're having a big bump up in temperature today, so maybe the wonky patterns are confusing my sinuses.  Doesn't take much!  Enjoy.


DOWNLOAD: The Sons of the Gospel--He Will Save Your Soul Yet

Posted by Lee Hartsfeld at 1:45 PM

I don't know how rare these homemade gospel records are in Ohio, but I can assure you the Goodwill stores are fairly full of them down here. Seems like every single town up and down the Mississippi Valley as well as the entire Appalachian Trail had a small group that put out an album or two. I have to pick each one up to see if they've snuck a Christmas song on there or now. :)

They're incredibly common here. A lot of KY and WV musicians move to Ohio and record here. And Kentucky-recorded gospel LPs show up pretty often. Dayton, Cincinnati, and Columbus are the three big recording sites for these groups in Ohio, it seems.

Indiana is the same -- every thrift has at least a couple dozen faith titles from small (or self) record labels. Many hail from Ohio, too, since we're neighbors. But not much from Illinois or Michigan. Must be heathens!

That's the only explanation! Interesting. I think I have some Michigan-recorded gospel, but it's not common. I think much of it has to do with where the independent, make-your-own-LP recording studios resided (resode?), and Ohio, Indiana, and Kentucky seem to have been the prime spots. Ohio may have headed the pack, especially with the Columbus and Cincinnati LP recording facilities of old. One Columbus outfit is still going, I think. How, I do not know. Might be part of the (over-hyped, imo) vinyl revival.

I live near Heath, Ohio, and a friend from Heath calls himself a "Heathen." Whether that's his original joke or something from local humor, I don't know.

Thanks Lee, for this interesting album. They are a Bluegrass Gospel group, if there ever was one, even if their instruments aren't in tune most of the time LOL! That being said, their pickin' is infectious IMHO. Their arrangements of the tunes are interesting (to my ears anyway), but more about that later, maybe. On the availability (or not) of small-town/group Gospel albums, although I'm not in the record hunting business as much as I once was (different things on the front burner now you understand), we've got our share here in KY. Had it in GA and NC, but don't know about LA (all the places I've lived). Looks like I'd better quit typing, just got cast into (and brought back from) outer darkness (actually IP Diagnostics, dunno how I got there), so 'til later, thanks again, love and prayin' for ya!

Thanks, Josh. Glad you enjoyed. I'm so used to small label gospel, I guess I didn't even notice the instruments being out of tune! My ears have become pretty forgiving over the years. I hope I get lucky and find more by this group. And I'll need to get something ready for Sunday. I'm usually more on the ball with my blogging, but lately the weather's been getting me down--and I've had some sort of bug, though I seem to be kicking it. I also had a PC bug that the Geek Squad removed. The scary thing about malware is that it can come from anyplace--from ads on popular websites, even. But I ramble. Glad you enjoyed! I love finding local bluegrass material. Best to you.

Lee,
I'm strange (my wife would amen shawnuff right there), when it comes to listening to records. I look for and find blessings of course, but I also simaltaneously notice oddities, like tape speed variations, out-of-tune instruments, etc. I enjoy local (a relative term), low-budget Gospel recordings, because I believe them to be more down-to-earth, save for when some bigwig has put professional bugs in their ears, which (sad to say), I've seen before. I'd enjoy more of this group, if you found it, so post away! The arrangement that really sticks out to me, is their treatment of Cabin On The Hill. They stick closely to the Flatt and Scruggs arrangement, but go back to the original Gospel ending of the third verse (yes there's a verse that both groups omitted). Oh and the Rhythm Guitar player obviously didn't know how to play a D Flat Minor, but neither do I LOL! From what I've read, the first commercial recording of that song, was The Mullins Family, from near Clintwood, VA, recorded at WOPI in Bristol, TN. I may have heard it somewhere before, but looked for it online the other day, to no avail. I'm rambling myself, so 'til later, love and prayin' for ya!