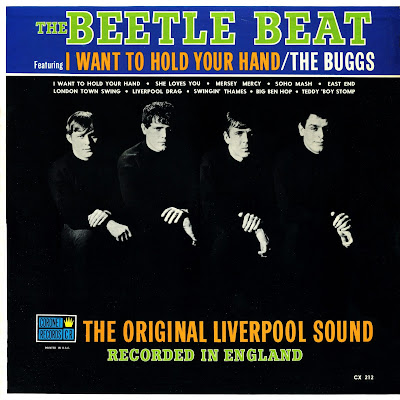 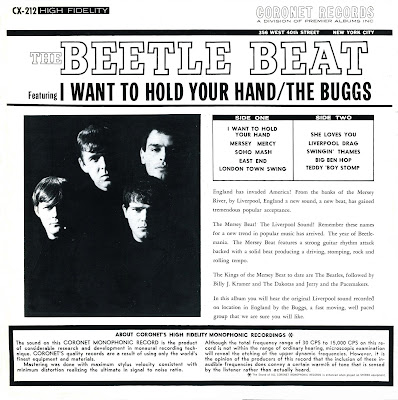 It just occurred to me that putting up an LP by "The Buggs" might not be in the best taste, given our current health crisis.  But "The Buggs," of course, is a phony name (you'd never have guessed)--the group's real name was the Coachmen V, and it included Spooky Tooth member Gary (Dream Weaver) Wright.  Info (save for the Spooky Tooth detail) courtesy of Brian McFadden's terrific Rock Rarities for a Song: Budget LPs That Saved the Roots of Rock 'n' Roll.  (I know that it's also at Discogs.) The Coachmen V thought they were getting their big break and were shocked to discover their tracks had been released under different titles, with a fake credit, and without so much as their real group pic on the jacket.  This is what you get for trusting the Coronet label, I guess.  Maybe the weirdest feature of this LP is the inclusion of the Doris Troy/Hollies hit Just One Look, only under the title Soho Mash, believe it or not.  It seems that Aaron (Goldie) Goldmark, the head of Premier Albums Inc.'s publishing wing, had published the song, and so it was up for LP-filler use.  (Coronet was a Premier Albums, Inc. label.)

The tracks are fun and well performed, but I would have thought the Baiao beat in these numbers, a staple of the Invasion sound (a feature straight from Brill Building pop and R&B), might have alerted the group to the actual intentions of Coronet.  That, and the "Yeah, yeah, yeah"s.  Maybe it's only in retrospect that these tracks sound like surrogate Mersey beat items, though.  And a lot of U.S. groups were being pushed toward a Beatles sound on account of the Fab Four's massive fame.  Some groups, like the Buckinghams, were even adopting Brit-sounding names, of course.

Another piece of weirdness: A single from this LP was released on Coral and credited to another nonexistent group, The Pacers.  It featured You Got Me Bugged and Sassy Sue, obviously the real titles of Mersey Mercy and Big Ben Hop.

In my thrifting, this is the fake Beatles LP that shows up most often, but this is the first near-mint copy I've landed, so I just had to post it.  For stereo fans, sorry about the mono, but the stereo quality probably wasn't much to rave about.  All these decades later, I'm feeling bad for the Coachmen V, who must have been beyond bugged over this betrayal, and who certainly didn't deserve to be derailed in this fashion.  (Had to make a terrible pun--sorry.)  I would hope that modern record contracts forbid this kind of name, title, and image hijacking.... 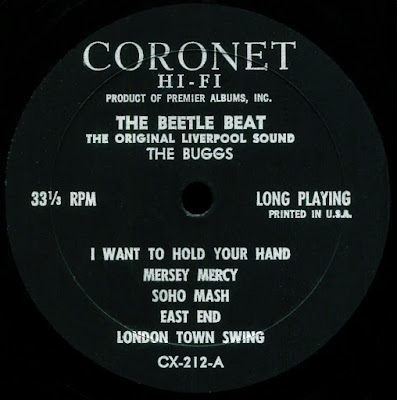 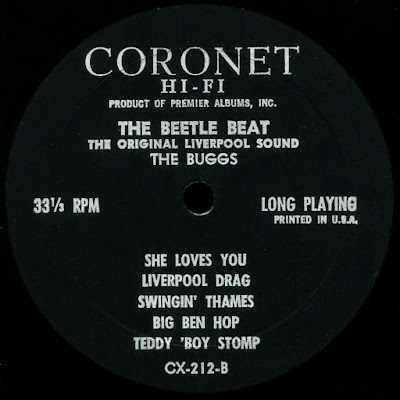 Thanks for relating the interesting story behind this record, which I've seen many times but never heard.

Hi Lee
Thanks for finding my yardsale record I got for 10c as a kid as my introduction to what I thought was The Beatles, lol !
Can't wait to hear a nice mint record such as this which is one of
a fave of my fab music genre
Byron
Appreciate the Backbeat Buggs / Coachmen V / Pacers story and
your extensive research.
Hope you're doing good and keep being You, You Hear !?
Please and Thank YOU !!!

Byron, you're very welcome, and I hope you enjoy the near-mint sound! I have two other copies, both in pretty mediocre shape. Couldn't believe my eyes on this one. It still had the plastic on it, though it had been opened. Not sure anyone ever played it!

And best to you all during these crazy times....

This is the one that pops up most often in the thrift store bins, usually in very trashed condition. Another Beatles exploitation record with a known name whose involvement I was unaware of. Hey, it was work, so good on 'im. Thanks as always.

I remember this LP but never heard it. (I think). Very cool, but your comments are even better. Thank you
Gary

You're welcome! A lot of folks never heard this. I wonder if it was one of those LPs which, after the first couple of tracks, people stopped listening to. "Hey, this isn't what I bought!"