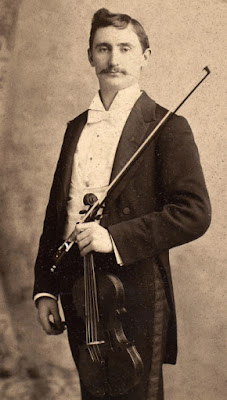 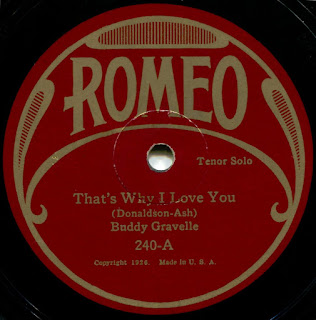 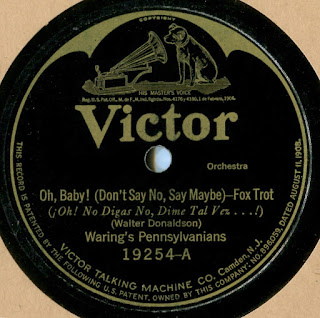 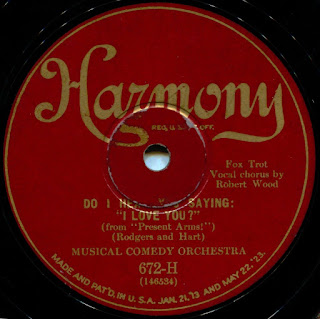 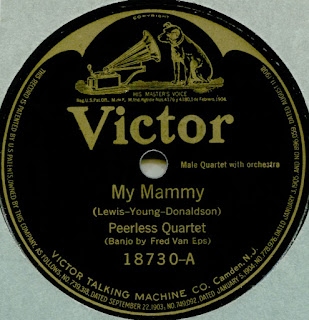 Can you imagine a 1920s pop song called If You Can't Tell the World She's a Good Little Girl Just Say Nothing at All?  Well, you don't have to--it's in today's playlist.  And if you've always wanted to see Oh, Baby! (Don't Say No, Say Maybe) in Spanish, here you go:

One to scratch off your bucket list.  Fourteen 78s, some of them in semi-dreadful condition, others in decent or better, and all a delight.  I hadn't planned on including four numbers by the brilliant American songwriter Walter Donaldson, but that's how it turned out.  We get the above Donaldson title, plus Sam, the Old Accordion Man; My Mammy; and That's Why I Love You, the last with lyrics by Paul Ash.  What was Paul thinking when he penned the following?  "And I'm in love.  That's why I love you; I do."  Why do I love you?  Because I'm in love!  Obviously.

Not to rile Gershwin fans (and I love Gershwin), but I sometimes think Donaldson was our best-ever songwriter.  His range was incredible--from My Mammy to Love Me or Leave Me.  And, though the former number is associated with blackface and a "first talkie" that wasn't the first talkie, it makes an ideal quartet number, as demonstrated by the Peerless Quartet.  Donaldson didn't invent the circle of fourths, but few songwriters have made better use of it.  ("Mammy.  Mammy.  My heart strings are tangled around Alabamy.")  In fact, it was this very recording that made me realize what an exceptional tune this is.  And we get Fred Van Eps on banjo.  This is why I never bother with modern pop.

And Sam, the Accordion Man is like the poster child for a "hot" dance song.  I bought the disc for its flip, because I just had to have a side called If You Can't Tell the World She's a Good Little Girl Just Say Nothing at All.  But Sam erases all memory of... whatever title I just typed.

Wikipedia tells us that Al Bernard, who gives us the Bert Williams-esque Bell Hop Blues and You Know What I Mean (1919), was a vaudeville entertainer, which I could have guessed in my sleep, but I did not know he was called "The Boy from Dixie."  Here's the Bernard background.  Not to insult Al, but in the Wiki photo, he looks like the demon brother of Fred Astaire.

The oh-so-slightly racist Way Down Yonder in the Cornfield is still a Barbershop standard, far as I know.  I have the music in a fairly new collection, anyway.  The Imperial Quartet is superb, of course, but some may find the side hard to handle.  I would have thought the quartet folks would have dumped the number at the first opportunity, but what do I know?  But given its classic Barbershop status, dumping it would be like revising history.  It would be like TCM not showing Birth of a Nation (which would be fine with me).  I mostly slept through that one in a film class, but I saw enough of it to go, "Dear God."  Then I discovered BOAN was, for many decades, the standard revised history of the South following the Civil War.  Yikes.

The Victor Military Band is magnificent on the Slippery Place Rag by household name Phil M. Hacker.  I know I have the sheet music to this someplace, but it would take me till May to find it.  I'm sure it's all over Google Images.  Maybe.  I meant to look up the Musical Comedy Orchestra (on the junk-quality Harmony label) but forgot.  No time like right now.  Give me a moment.

Okay--pseudonym on Harmony for the Bar Harbor Society Orchestra.  Thank you, Brian Rust.  Extremely nice sides, but someone played them with a nail or maybe a box cutter, so I had some restoring to do.  But nothing like the work required to rescue tenor Buddy Gravelle's side on Romeo, a label that had no standard response curve, which meant I had to create one from scratch.  Then I had to deal with all the surface injuries.  This was part of a small set I just bought through the mail, and they all look five times better than they play.  Oh, and fabulous piano duet section on the Romeo disc.  Wonder who provided it?

Charles D'Almaine (first pic) was a violinist with the Metropolitan Orchestra.  He also dig jig medleys.  But, of course, we're not allowed to label him a country music pioneer, even though he's here, from 1907, playing jigs and reels associated with the music.  You see, accomplished musicians are never "pioneers."  Pioneers are people who can't read music and who learn their songs from Aunt Melba on the back porch.  Just so we're clear on that.

Sweet! A great playlist to fill an evening for all of us 'stay at homers', which is pretty much all of us, for a while anyway. No worries about condition, with this sort of thing you have to take 'em as you find 'em, eh? Thanks again Lee

You're welcome! And, yes, you have to take these as they come. The dealer who sold them does a quick test-play on his gramophone, plus grades by sight. He over-graded this time (which is easy to do), but these are such memorable sides, I didn't mind having to do the sonic surgery. Also, he never uses a magnetic pickup, and what plays fine on a wind-up might fare badly on new gear. Or whatever on earth I just typed. Hope you enjoy!

I should note that eight of the titles are new additions. The rest have been in my collection for a while.

He's probably making them worse by playing them on an old gramophone. :(

Anyhow, speaking of playing things with a nail, have you ever tried building one of those little paper turntables what plays a record using a sewing needle and a small paper horn? I've thought about trying that just for fun one of these days. I'm sure it's horrible for the record, but a neat little demo.

I tried a pin and a paper cone as a kid, but it never occurred to me to construct an entire player out of paper. Bizarre!

This blog has been a pleasant surprise. Thank you for contributing this valuable knowledge to our culture. Kind regards from Spain.

Lee, thank you for the shellacs, and the relax - and especially the work you put into them as both docent and curator, and the background and perspective. Keep 'em spinning!

Your thanks are appreciated. I'd say more, but nighttime COVID-19 stress is taking over and scrambling my thinking.... Probably a lot of folks in my boots. Stay safe!