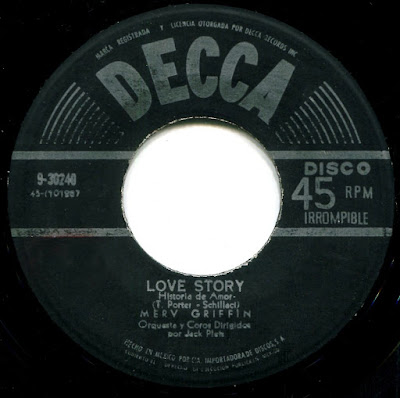 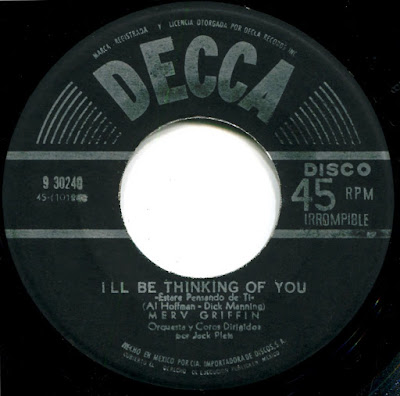 This 1957 Merv Griffin single usually goes for too much money on eBay, and because it's a "popcorn" standard.  I got it for cheap, and probably because it's a Mexican pressing.  But it sounds great--better than any of the YouTube postings, if I may be so humble.

So, what is "popcorn"?  Well, you read the Wikipedia entry, and see if you can figure it out--I gave up.  I mean, I get the background, but there seems to be no real-world definition of popcorn as a style or genre. See, there was a Belgian cafe in the late 1960s that played soul and ska, and which changed its name to the Popcorn (after James Brown's "The Popcorn") as its brand of DJ background caught on with dancers.  The kernel that was ska and soul expanded to include 1950s and 1960s country, pop, and R&B (all of it mid-tempo to slow).  Other such clubs popped up, pun intended.  Apparently, at some point, someone heard Merv's Love Story and figured it was a perfect example of the popcorn style, since the style doesn't really have a firm definition, anyway.  The Arthur Norman Singers doing The Lone Ranger Theme on Golden Records could be popcorn, for all I know.  No, actually, that side is too lively.  But a DJ could slow it down to 33 and 1/3.  The 45 single, I mean.

I'm just trying to picture Belgians dancing to Merv Griffin.  Did Merv know about this?

Anyway, popcorn is not simply pop that's corny (my first, and wrong, guess), though I suppose we could use that definition if we wanted to.  For the sake of speculation (using clues contained in W.'s essay), I'll postulate that Merv's Love Story makes the grain--er, grade--because it's in minor mode and has kind of a tresillo or habanera thing going.  I'm not good at naming Latin rhythms, because they overlap, as a rule.  And so it took me several minutes of playing along on my keyboard to figure out that the bassline is unsyncopated--it's just (12)34--a half note, followed by two whole notes.  The accent on the fourth eighth note is happening in the vocal chorus, on top of at least one other rhythmic event.  I could have simplified all this to "It's got a Latin groove."  But no--I had to take the complicated route.

Also, and maybe more importantly, Love Story features happy lyrics about the triumph of true love, only set to a melody that can hardly be described as cheerful--"dire" comes to mind.  That might (emphasize might) be the most popcorn thing about Love Story--the mood of doom, only joined with words that are as happy as lyrics get.  When I first heard this side years ago, I was expecting a last-minute twist--a train running over the lovers, or maybe the ground swallowing them up.  But, no.  It's like the Boulevard of Broken Dreams with sunny lyrics: "I wake up feeling fine each morning.  I really love my lot in life.  I'm full of glee, I'm so happy, etc."

Merv does well on both sides.  As a singer, he recorded for (let me see) seven labels, starting with his very own, Panda.  Then RCA, then Columbia, then Decca, then Carlton, Cameo, and Mercury.  He started out strong on RCA, and it looked like he was on his way to the big time as a pop singer.  But it never happened.  After Merv became established as a talk show host, he sang on MGM, Zoo York, and Griffin Records, Inc.  I wonder who owned that last one? 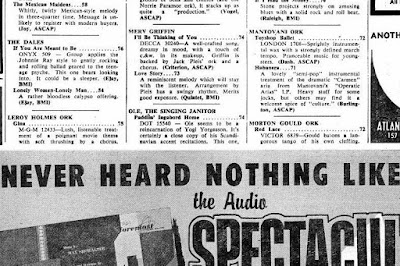 I once followed a European blog that specialized in popcorn music. I never could figure out what that term meant. Your explanation is helpful!

Great! I hope Friday Merv returns as a regular feature 'round these parts.

I think Popcorn is a lot like Northern Soul. It's whatever fits the situation, mixed with a healthy dollop of "I've got it and you don't" one-up-man-ship. I've heard stories of people paying crazy money for rare singles that fit the mood, even though the song was available on some easily available LP somewhere. Weird.

It's the thrill of having something in its original form or something. And I'm not selling this Mexican release for anything less than $80. I wonder if there's a so-terrible-it's-great aspect to popcorn...

Yes, more Merv. I was going to put up his "Dance Party" LP, but a British CD label beat me to it.

You should make that $800, because what you really want to do is keep the record for yourself, but being a nice guy, if there's someone out there that desperate to own it, well, you're willing to give the guy a break, right? Plus, then you'll have enough cash to pick up the $500 78 you've been drooling over for the past ten years.

Collecting is both a blessing and a curse.

On a side note, I finally acquired the volume I was missing from a 15 book set. Two years ago I passed up on a copy for $27 having paid no more then $12 each for the others. It disappeared a week later, and all that was left was a "good" copy for $237. No others appeared until a week ago a "very good" popped up for $19, so I grabbed it. I DO feel some satisfaction at having the complete set, and I WILL actually read them all once I'm done with the series I'm on now.

Merv was listenable, but never any threat to Dean Martin. Thanks for picking apart Love Story It made it a lot of fun to listen to.

Apesville--So, they slow them down as a rule? True story: I actually commented last night at a too-slow posting of "Love Story" at YouTube. I pointed out that it's much slower than recorded. Someone's probably howling with laughter over that. Live and learn! (Maybe I can go in and delete my comment. There's a way to go into one's comment history and undo things.)

I can imagine someone listening to slowed-down Merv and thinking he actually sounded like that. Step aside, Thurl Ravenscroft.

Larry--Yes, it would be an enormous sacrifice at any price. And "The Things I Didn't Buy" would probably become a bestseller. (To be kept in print for eight months, then pulled.) Oral histories of people who stupidly passed up, say, a massive bargain--one they probably could have talked down even cheaper. That was my dumb error, back when I was new to sheet music collecting. At a local outdoor flea market, someone had a box of E.T. Paull sheet music in fine shape, 50 cents each. Instead of reaching for my wallet and asking, "How much for the entire box?" I passed on it, figuring they'd show up again. No rush.

Glad you liked my dissection of the track. I just had to know what that common "Ko Ko Mo"-style figure is called. In notation (with x being the accented eighth note), it's 123X56X8, and I should have simply checked out the "Habanera" portion of Bizet's "Carmen" opera, but it's hard to think clearly under the influence of popcorn.

yes sometimes I have to use https://audiotrimmer.com/audio-speed-changer/ to speed them back up if I take them off youtube. It helps if you have the song time on the label & can then work out how much they have slowed them down. I do not understand why anybody would want to slow a 45 record down. But Popcorn Dj's think its fun. sometimes they alter the title or artist name as well to try to hide what the original 45rpm record they have changed was.