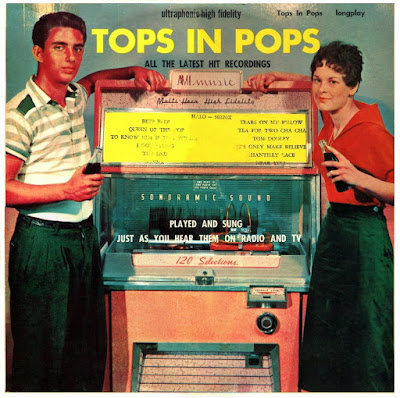 A cheap-looking but fairly effective jacket photo, with the guy on the left either badly sunburned or wearing war paint.  (Sorry, that was not PC.)  The extreme contrast was not my doing.  It seems to have happened only in the upper left hand corner, and I suspect a lighting issue during the shoot.  Since this release is the cheapest of the cheap (Halo, a product of the fake RCA--aka, Record Corp. of America), we can naturally expect the soda bottles on the cover to not be part a product plug--no respectable soda brand would have wanted a shout out on one of these.  And so the bottles are generic.  And they may not even contain pop.   (I'm not suggesting whiskey or anything else alcoholic, but who knows?)  And I have no idea what's going on with the jacket's catalog number (50220X), since the number on the labels is 1670--the standard number for this outfit's Tops in Pops albums.  (Earlier on, the standard fake-RCA catalog number was 1389.)  Like Tops, the fake RCA used a single catalog number for its fake-hits albums, plus a system of suffixes that made absolutely no sense, because there was no consistency to them.  None.  Zilch.  I've concluded the cheapies weren't trying for consistency.  Consistency involves planning.  Planning takes time.  Time is money.

Anyway, I ripped this according to the track order on the jacket, which makes the terrific I Got Stung our fourth offering.  Having it near the start really helps moves thing along--that was my main motivation for going with the jacket listing.  In fact, the label suffixes--W and X--suggest that the second row of titles should be regarded as Side 1, but there's really no way to be sure.  All Halo would have had to do was print "Side 1" and "Side 2" on the labels, but more ink means more money, and I seriously doubt Halo cared which side people played first.  Halo didn't care if you tossed this to your dog for a game of fetch.

I love the top line, all in the same font and looking like something spit out of a teletype machine: "ultraphonic high fidelity...........Tops in Pops.....longplay."  Who in his or her right mind would have believed this LP actually includes "All the latest hit recordings"?  Which is one bold (as in, blatantly false) claim. We have to hope that no one mistook this for a legit issue.  How would that be possible?  We have the label name stuck down in the yellow rectangle that served as the title box (I've found three other versions which sport this cover), and the cheap print isn't even properly centered (notice how "Donna" and "Near You" spill over the bottom line).  Meanwhile, the models are shoved to the edges of the pic.  I guess I need to revise my "fairly effective jacket" verdict.  It is fairly effective--until you analyze it in detail.

Given all these crimes against the purchaser, the tracks must be pretty bad, no?  Actually, they're terrific.  I can't explain it, but I don't complain.  The performers put their all into these numbers, and the difference between this group of fakes and the lackluster Tops material of three posts back (the girl with the loud socks) is pretty epic.  These are genuinely fine fakes.  I guess we can forgive the lousy lettering and deranged numbering system, though we can still make fun of them.

Masterful fakes of the Playmates' Beep Beep, the Big Bopper's Chantilly Lace, Bobby Darin's Queen of the Hop, Little Anthony and the Imperials' Tears on My Pillow, Warren Covington's delightful Tea for Two Cha Cha, and, of course, I Got Stung--one of the best budget fakes ever.  We owe "Unknown" a long and heartfelt round of applause.

Oh, and the sound quality is surprisingly good, too.  This LP was an accident or something. 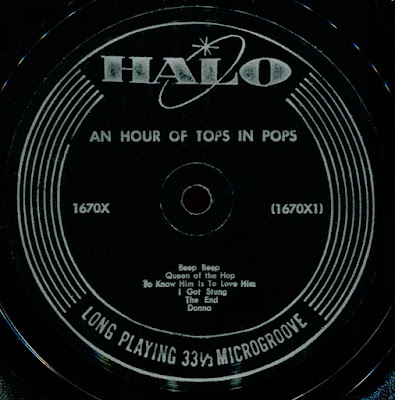 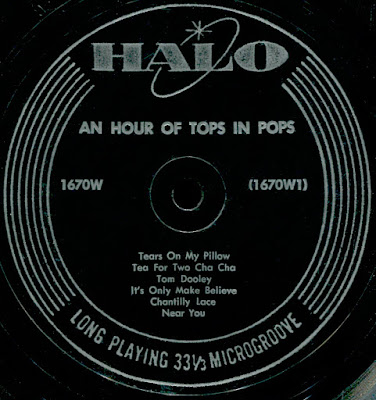 Lee
Posted by Lee Hartsfeld at 9:33 AM

These where all issued as The Allegrettes in France https://www.45cat.com/artist/the-allegrettes

The Allegrettes was a made up name to hide the real USA artist names.

Wow. Thanks! I knew the cheapies got their share of releases outside the U.S., but the Allegrettes is/are new to me. Obviously connected to the Record Corp. of America. I have a French version of some Bell label material, but of course Bell, even in its early days, had more dough than fake-RCA. Maybe the French label initiated the deal.

The owner of the french Pacific label (started in 1945) had certainly somme connections with Eli Oberstein, at least at the earlier stage, as you noted. BTW, Allegrettes were named after his Allegro label.

Some "Oberstein" artists were US soldiers based in Brussels, Belgium and they recorded there, such Tommy Clayton (on Royale Records, another budget label owned by Oberstein)

Fascinating info. Yeah, I figured the Allegrettes were named after Allegro. And I LOVE the way so many Oberstein issues sported two (or more) label names. All to drive future collectors nuts. In my case, the tactic worked.

I'd read that Oberstein recorded vocals in the U.S., with the musical backgrounds recorded in Europe, to dodge royalty requirements, but I didn't know some of the singers were based outside the U.S. Makes sense. My favorite thing about this group of crap labels is the sometimes excellent material that got through. When Pickwick basically took over the junk-label market, it went for (relatively) slick packaging to hide the fact that its product was generally worse than even Crown's or Halo's/Ultraphonic's/Varsity's, etc. Thanks for the info!

100 Allegrettes tracks https://workupload.com/file/FXPyBJAm see if you can work them out as to who is who

This site has the EP covers http://www.45vinylvidivici.net/SEVENTIESARTISTES45%20%28AM%29/ALLEGRETTES.htm

a couple are LP V/A tracks

Thanks for these! Was this a French reissue? It shows up on European Amazon sites, but not the U.S. one. Working out who is who would be difficult, since this label group never credited anyone, but I believe there was a good deal of crossover with Broadway/Value Hit Parade Tunes, though I suspect those names are made up. But I'll start with Broadway/Allegrettes comparisons. And we have a mystery right off the bat--"Venus" is the Pickwick (Bravo label) fake, but "Barbara Ann" is NOT the Pickwick fake. Pickwick did end up with a certain amount of Oberstein material in the late 1950s, but there may have been competition (Lord knows why). This could explain why "Barbara Ann" is not the version credited to the (factious, I'm sure) Bobby Krane Chorus and Orch. on Pickwick.

Lee, these are Gilmar records tracks, which were arguably where the best fake pre-invasion tracks were made. I am a titch biased, so take it for what you will.

Cheep or not. Inexpensive date (generic pop, a nickel for the nickelodeon, etc.), or what-have-you. That guy sure looks as if he's NOT having the time of his life. Maybe he'd rather be back out on the beach, where he got that wild sunburn!

Having one Halo'va good time.

Oh, and, thanks for more cheep thrills!

Sure! And great pun!

Yes, the guy does look a little too serious...

i had this record when it first came out! it was a christmas present and i was thrilled to have all these songs for my very own. i'm sure the relative that bought it thought these were the hit versions. i was 11 so i must have known they were covers but i was a rock and roll crazed little kid and who could afford to buy all those expensive 45s or 78s! thanks for reuniting me with a lost treasure!!

I meant to answer earlier--sorry! Thanks for the info. But didn't Gilmar get its material from Tops and Broadway/Value Hit Parade? I thought it recycled stuff. But you likely know much more about it than me...