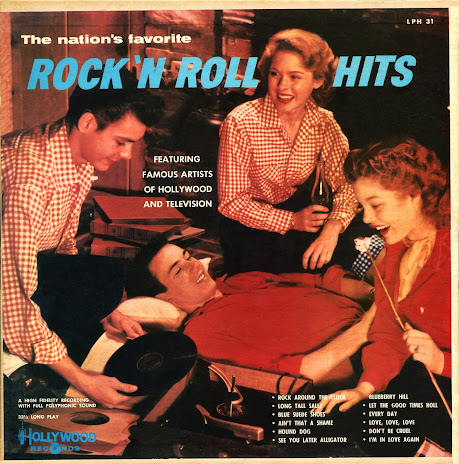 Now, I would swear I had featured this LP before (my other, "beater" copy), but I would sworn, and I would have been wrong.  In fact, I can't find a trace of a former MY(P)WHAE post of this LP, though I did post the boxed-set version, which came out on Hollywood's sublabel Variety: 18 Big Rock 'n Roll Hits.

For that post, reader Pascal came up with a list of likely suspects for these tracks, which Hollywood and Variety failed to give names to, beyond "Famous Artists, etc."  Yup--artists so famous, they didn't want their names associated with this collection, I guess.  Anyway, someone used Pascal's credits, plus my correction (Gabe Dake, and not Dick Warren, on Rock Around the Clock), and put them up at Discogs.  Here's the link: Gabe Drake, etc.  I'm trying to keep things simple, by the way, though I'm probably not succeeding.

For Rock Around the Clock, Gabe Drake was the real or fictional (not sure which) name on SPC's Prom label, whereas Fred Gibson was the name assigned by Tops. (My bad.  The Tops version is the same as the Gateway version credited to Dick Warren.)  Popular Extended Play Records gave no name at all, but it was the same guy each time.  (This is why fake-hit collectors have therapists.)  As for the rest of Pascal's list, I'm in almost complete agreement--for instance, if that's not Jimmy Breedlove on those four tracks, then it's the best impression of Jimmy I can imagine.  I have to say I don't know about Ollie Jones and The Cues--I've heard a couple Ollie Jones sides, and it doesn't sound like him, but I'm sure Pascal is much more familiar with Jones and the Cues, so I'll go with him.

Though this is a repeat, the fidelity should be much better, because 1) it's an LP, and 2) it's an LP in amazingly good condition--by the standards of Hollywood Records, that is.  Actually, a Hollywood LP that merely plays gets an automatic VG.  Since this recently-thrifted copy looked so clean, I got adventurous and used my better, light-tracking stylus for this rip.  I did another with my less expensive, more rugged cartridge (and spherical stylus) and heard no difference in response, so I stayed with this one.  I think the sameness of response is because the high end on this isn't very high.  Anyway, you're hearing the 1.5 gram needle.  On junk vinyl, no less.  "Thanks a lot," it said.

My other copy--the one I thought I'd previously posted--is the second edition, with a border around the photo of the slightly-too-old-to-be-teens teenagers, and retitled 18 Big Rock 'N Roll Hits.  For once, the front-jacket models are posed naturally, and they look genuinely glad to be there, though that vintage phonograph is... scary, frankly.  It look like it was designed to destroy discs after four or five plays, max.  And notice that the guy on the left is playing Decca label 78s--on the cover of Hollywood label LP!  After closely studying the object held by the girl on the right, I'm guessing it's a toasted marshmallow on a stick.  Which means they're sitting by a fireplace.  Which means they have their record player close to same.  Heat and 78 rpm discs make for a bad marriage, but who am I to tell them how to party?  And there's a bottle of no-name soda pop.  Not your usual kids-rocking-to-the-latest-hits cover art.  All it needs is a Ouija board to complete the mood.  "Spirit from beyond, tell us who recorded these tracks.  Oh, my--it's moving!"

A Blue Ribbon Product, for your information.  A recognized value by the Saturday Evening Post.  The beyond-weird liner essay goes on about "'so called' musical forms" like Jazz, Ragtime, Swing and Sway, Be-Bop, Vo-Do-De-O, and (of course) Rock and Roll, all of which feature syncopated beat patterns--patterns which have "aroused the primitive senses in species homo since the beginnings of history."  That long, huh?  And yes, I've seen dancers get pretty rowdy under the primeval sway of Vo-Do-De-Do.  I saw an entire town torn up, once.  Anyway, "giving vent," the notes tell us, "is a healthy, normal part of a teenager that should be encouraged in our attempt to create mature adults.  With this in mind, this collection of the best of 'Rock and Roll' is dedicated to today's refreshingly stimulating teenager."  I appreciate that Hollywood is doing a social service, but they don't have to sound creepy about it.  Refreshingly stimulating teenager?  Yikes.  At any rate, and at least in that lighting, the cover teens look like twenty-somethings.  The lass with the no-name soda pop is getting the LP title in stereo.

Fidelity is okay throughout, though if Delbert Barker's Blue Suede Shoes were any more compressed, I think the waveform would have expired.  Good version, though, even if the guitarist almost blows the closing riff.  I think I hear the stock rockabilly I9 with the ninth taken down an octave.  That became such a neo-rockabilly cliche, thanks in part to Taco Bell.  What am I talking about?  I don't know.  To the music... 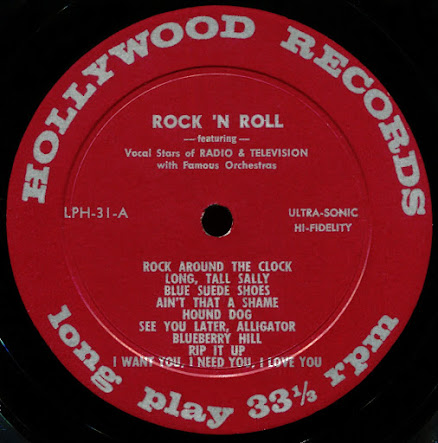 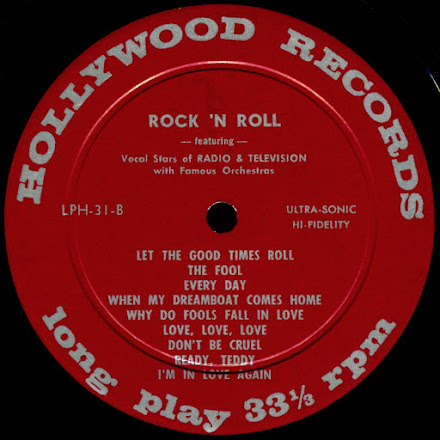 Posted by Lee Hartsfeld at 8:01 AM

Thanks for sharing the Hollywood version... sounds a little better than the Varsity version. Is that the worst Hound Dog on record?... maybe they should have given Mr. Breedlove a crib sheet with the song lyrics. Oh well. Great fun anyway. Burt

As I recall, Marlon Brando and his hoodlum motorcycle accomplices were hopped up on that "Vo-Do-De-O" music in the classic film "The Wild Ones."

I stared at the cover for a long time trying to figure out where the fireplace glow was coming from. Judging from the rubine complexions, it must have been near!

Yes, it does sound like Jimmy wasn't well coached on the lyrics. But, on the plus side, he does sound a lot like Big Mama Thornton, who of course did the pre-Elvis "Hound Dog." Despite its faults, I kind of like this version. Glad to hear the sound quality is better than the 45 set--I haven't compared them yet.

I'd chalked up that color and glow to poor photo reproduction, but yes... it could be the light from a fire. Definitely. It's most pronounced on the face of the girl in the lower r.h. corner--it almost looks like a filter was used. The cover departs radically from the budget-hit tradition of lively, brightly lit scenes.

Thanks for posting, Lee! Was worried when we didn't hear from you for a few days, especially with no Sunday Morning Gospel! Glad you're back! :)

Another most impressive installment in the wonderful world of fake hits.

I have a question that's off-topic, but still up your alley:
Are you aware of (and do you have) any of the LP recordings that exist of Albert Schweitzer playing the organ? Decades ago I remember my local library had a two-record set issued sometime in the very late 1950's.

I have not seen or heard of them since.

Thanks. And, no, I wish I had some Schweitzer LPs, but I don't. He recorded Bach mainly, didn't he? I think he even did some editing on Bach preludes and fugues. I seem to recall that his LPs popped up in the past, that they were fairly regular thrift items. But I haven't seen one for years. Sorry about that. If one comes my way, I'll definitely grab it. (But not without paying before I leave!)

In other It's Official: I Have No Life News...

"Is there rum in this Coca Cola?"

"Is this what they call 'playing doctor'? If so, get to operatin' gals!"

This quarantine activity (er, or lack thereof?) really brings out the weird-ohs.

Seriously though, is this one for the "cover better than the music" LPs files...?

Ha! No alcohol for me, either--I'd very quickly get to drinking too much. I like your titles. The only one I could think of was, "I just love my Dad's Jimmy Dorsey 78s!" I love how the not-legit labels tried to give themselves greater imprimatur (or whatever that word is) by showing legit-label records on their jackets. They certainly couldn't lower the illusion of legitimacy. Oh, another title/caption: "Should we be this close to the fireplace?" And where, exactly, was the cameraman standing? So many questions. Budget covers usually don't raise this many questions...

Pose so many mysteries, I mean. And why does the (I'm assuming) marshmallow on that stick look like a piece of Cracker Jack?

Jim,
I found some Albert Schweitzer recordings at this blog:

I hope this helps. Burt

Saw your mention of Delbert Barker in your latest post, and it reminded me that WVXU in Cincinnati did a series of programs on King Records a couple of years ago, including an interview with Delbert -
https://www.wvxu.org/post/king-records-delbert-barker#stream/0

I enjoy your blog, keep up the important work!
Ken