Sunday morning gospel--Life Is like a mountain railroad: Sacred shellac (1905-1928) 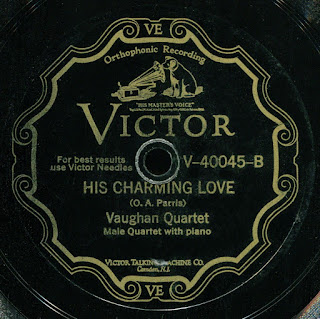 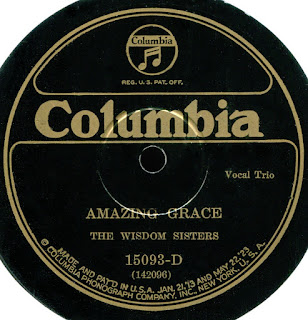 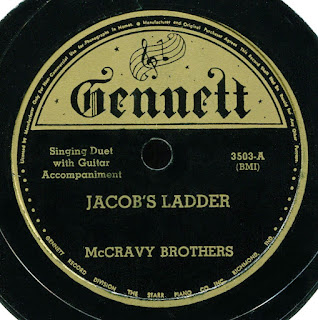 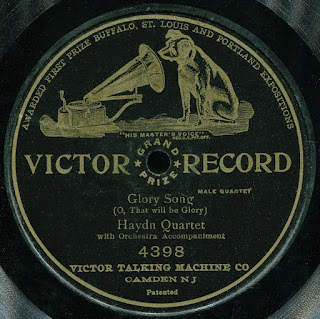 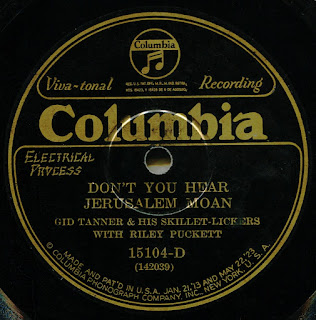 We start with the Vaughan Quartet's 1928 recording of His Charming Love, with its flip, I Want to Go There, Don't You?  Somewhere, I have the James D. Vaughan songbook containing the first number, with its complex overlaying of voices.  And I used to know something about this group, but I forgot it all, and a quick Google search gave nothing specific.  Suffice it to say the group's mission was to promote Vaughan's songbooks, which it probably did very successfully, given its outstanding musicianship.

Gid Tanner and Riley Puckett's renditions of Don't You Hear Jerusalem Moan and Alabama Jubilee are poster children for the "old-timey" country gospel sound--what many would dub bluegrass--and the latter title is often, maybe usually, associated with the Mummers Parade, thanks to the 1955 hit version by the Ferko String Band.  But it goes back at least as far as 1915, and the lyrics are clearing describing an African-American religious meeting, complete with faith-healing.  It's taken at a tempo slower than we're used to.

Even more "old-timey" are Marshall Smith's two Columbia sides from the same year (1926), and darned if I can make out most of the words in Jonah and the Whale.  I did a ton of manual click removal for these, so what you're hearing is much better than what came out of the grooves initially.  While just as down-home-sounding (and from the same year), the Wisdom Sisters (Sitting at the Feet of Jesus; Amazing Grace) offer more precise enunciation, to say the least, though I still have trouble making out many of their words.   Could be an issue of accent or the limited sound technology of 1926, though I'm leaning toward the former. Could be anything--proximity to the mics, lack of experience in the recording studio, my own hearing.  Dunno.

The trio's haunting rendition of Amazing Grace is not the first recording of this number--Wikipedia gives that credit to a group called the Sacred Harp Choir in 1922.  The Grace melody sounded a bit off to me at points, as if the lead (top) voice was staying on the tonic instead of descending, but listening with my portable player, it's clear that I was confusing the lead with the second voice, which overlaps the lead as it descends.  Typically, it's headphone listening that yields the most reliable detail--in this case, it was my player.  I have trouble with the harmonizing of the cadence which closes each stanza, which is pure "folk" in its more or less parallel descent, the problem being the V7 without a root--or maybe it's the glaring augmented fourth in the two lowest voices on the middle chord.  It just sounds wrong, like a passing tone that never finds peace.  It bugs my ear, but there's no right or wrong in music--it's all an issue of what sounds correct to the listener.  At any rate, this is the Amazing Grace melody we know and love.  The text is from 1779, and it's been set to any number of different tunes over the past 240 years, with the present melody (from the early 1800s) finally winning out about, oh, 1900-ish.  That's a safe guess, I think.

The McCravy Brother's terrific Jacob's Ladder has an issue date of 1945, but it's a continuation of an old catalog series for the label, Gennett, and it sounds exactly like the McCravy's 1920s material, so I suspect it's from 1927 or thereabouts.  It just had to wait a couple decades to hit the shelves.  Charles H. Gabriel's Glory Song was one of the hugest gospel song hits of all time, and this 1905 version by the Haydn Quartet was one of my best-ever Goodwill finds, even if the disc was cracked.  I figured I could realign the disc and Scotch-tape the reverse to make it playable, and I was correct--worked like a charm.  Another Gabriel number follows, this time rendered by Scottish evangelist William McEwan (a.k.a. MacEwan)--a fun anthem called All Hail, Immanuel, which makes a great solo number on the organ.  I used it as such several weeks back, and the congregation loved it.  The chorus is a workout, at least in standard four-part arrangement.  The two Tietge Sisters sides are lovely, and the trio harmonies are more "correct" than the Wisdom Sisters', but, when you come down to it, "correct" is whatever sounds correct.  Maybe conventional is the better word.  Master, the Tempest Is Raging has always been one of my favorite gospel songs, and it hails from the late 19th century.

Then we're back to old-timey quartet sounds, with two groups that make the Vaughan Quartet sound like city folk--Smith's Sacred Singers and the McMillan Quartet.  The former is from Georgia--not sure about the second.  1927 sides from both, and all superb.  We Shall Rise might be my favorite Smith's side of them all, and I spent years hunting it down in old songbooks, partly because it's very close to another Resurrection Morning song, and I wanted to confirm that they were, indeed, two separate songs.  I was right--there are.  I prefer this one.  If I had the music handy, I'd give the year of composition, but I don't.  1911, I think.

I trimmed this 23-song playlist to 20, removing a few numbers that sounded a little out of character due to their more sentimental style.  Nothing wrong with a sentimental approach, but it just doesn't gel with the overall tone of this set.  The exuberant Jacob's Ladder doesn't, either, but I thought that it made for a nice halfway-point jolt, so I kept it in.  A nice "Aren't we having fun?" side before returning to the no-nonsense gospel of The Glory Song and Master the Tempest Is Raging.  I do put some degree of planning into these things.

All 78s from my collection and curve-corrected and filtered by me.  I was without info on the Gennett curve, so I went by ear.

Lee
Posted by Lee Hartsfeld at 7:30 AM

Lee,
If memory serves, the Vaughn Quartet were on the Grand Ole Opry and, along with some other early Opry acts, were recorded by Victor in Nashville in 1928. So few of the resulting sides from those sessions were issued that most of them fit onto a single Document CD (Nashville 1928) minus the Vaughn material. I did a radio show about early Opry performers on KTEP a few years back, and knew more about the subject then than I do this morning.

Thanks, Lee - and thanks as always for your tremendously informative notes.

I thought that said McGravy Brothers for a second. Nice name for a band, I think. :)

I second Buster -- amazing notes. I haven't tried your put-tape-on-flipside-of-record trick, but I have managed to get some completely cracked LPs to play by just verrrry carefully lining things back up.

Cool that a gospel quartet sang at the Grand Ole Opry. I glanced at a page of Victor sides (matrices that lead to the catalog numbers, etc., when clicked on), and the list looked long, but it didn't occur to me to verify whether or not these were issued sessions. I simply assumed--the researcher's biggest error!

In my record collecting and research, the most frustrating unissued side of all was the rejected flip of a 1914 Williams College Mandolin Club performance on Columbia, because it contained a period ragtime number and would have let us hear the club at its most African-American-influenced. Banjo and mandolin clubs were tremendously popular in middle-class white society from the 1880s into the 1920s, especially on college campuses, and they're one of the first major instances of whites imitating a black tradition. To find an actual recording of such an outfit, and from 1914, is pretty epic. Simply as an example of African-American music directly influencing the "mainstream" white population, the white massed string bands are massively important as history, and they fly in the face of the word-of-God cliche that ordinary whites, as a rule, have no idea what's happening in black music in any given era. I guess the originators of that myth never heard of minstrel shows or Barbershop singing. Anyway, the issued 1914 Mandolin Club side was interesting enough, even if the unissued flip promised to be even more so, but I was completely unable to get two historians of African-American popular music interested in the side. One heard it and thought nothing of it, and the other answered my email with the inane reply, "Williams College was white!" Yes, it was--and that was the whole point. The person had skim-read my brief email, I guess. I didn't see any point in continuing our non-exchange, so I didn't. It's a sad day when researchers demonstrate so little interest in their own specialty. Kind of surreal. Then again, some researchers are jealous of their own findings, insecure regarding their own reputation as experts in a given area. In other words, they're not eager to deal with new findings, especially if they're big ones. They want to be the last word on the topic. I understand the instinct--it's a weird fact of human nature that, the more specialized the area of research, the more cutthroat the competition. The lower the rewards, the more nasty the struggles for those rewards. There's some classic expression which describes this phenomenon, but of course I can't remember it. The lower the glory, the bloodier the struggle. How has our species survived this long?

Thanks. I wasn't sure if my notes made sense--I revised them several times, and while not fully awake. I read each revised section slowly to be sure there were no typos, then I read back the entire post to be sure the revised parts fit in. I wasn't too thrilled with my essay, but it must have worked better than I thought!

Maybe it's my vision, but I also see "McGravy," despite the fact I've long known that it's "McCravy." Could be an example of the human brain substituting a familiar word or syllable for an unfamiliar one. We've all heard of "gravy," but not "cravy." Unless you're a clever lyricist, and you want to describe a state of craving--"I get cravy when the Navy boys all cozy to the bar." This is why I never became a lyricist.

Thanks. I was really unsure about them--glad I went ahead with them. I've also gotten plays from cracked LPs without resorting to Scotch tape, if only because vinyl is far less brittle than shellac as a rule--not subject to chipping, usually. I was lucky with this 78--it's very early, and the material is far more durable than later shellac formulations. More often than not, cracked 78s have lost too much material around the crack edges to be tolerable, unless you like big gaps in the sound each revolution. And have a stylus you don't value very much.

Oh, and I had a cool Goodwill LP with a V-shaped crack--the type that happen when someone has hit the surface and broken it. They vinyl had split outward in two directions. Hopeless. Plus the thing was in VG- shape, at best. I love a challenge, but not that much. To the circular file it went.