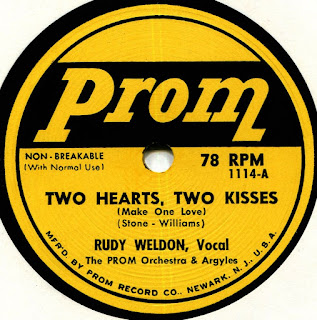 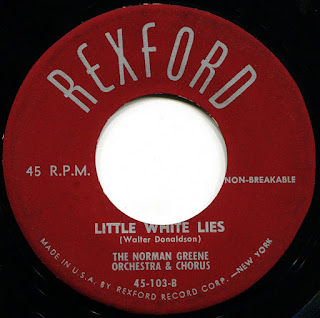 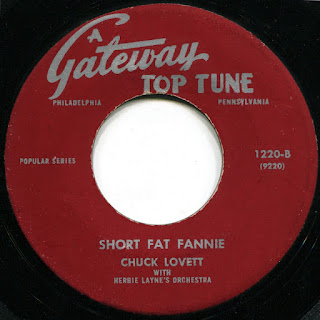 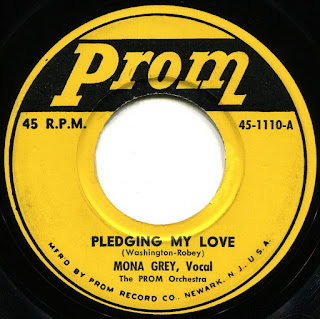 Yes, a four-selection Two Hearts, Two Kisses (Make One Love)--athon, featuring four versions of the 1955 hit for Otis Williams and the Charms, famously covered by Frank Sinatra and Doris Day.  I'm giving you one real-label cover version (the outstanding Doodlers, on RCA Victor), and three fake hits--Bob Vance on Big 4 Hits, Rudy Weldon on Prom, and Gayle Lark on Tops.  I did a big search through my platters for the Gayle Lark Tops version, certain that I had it.  Looked and looked, and turns out it was a few feet away in a small row of 78s.  Plus, I'd already ripped it.  Oops.  Clearly, I need a staff.  The cats are no help in this department.  They just get hair all over things.

Then, the lovely instrumental Candlelight, by Mantovani and his Orch.,1956, and this may be my favorite Monty track of them all.  Artie Malvin follows with Eleventh Hour Melody, which is not the ideal number to follow Candlelight with, since both are slow numbers.  Then again, they're following the Two Hearts-athon, so maybe two slow numbers fit the bill.  (These decisions are complicated.)  I just now noticed how dull Malvin's rendering is--the thing needs some dramatic punch.  It usually has a sort of spooky effect.  Luckily, waiting for us on the Tops label is an excellent Rags to Riches by Bud Roman, with especially nice sound for 1953, considering it's an early Tops 45.  (They don't always sound this good.)  The Halley Sisters follow with a good Rock Love, though it clearly copies one of the pop covers of the title, as opposed to the Lula Reed original.  Don't Shake the Tree is the flip side of the Doodler's Two Hearts, and the lyrics don't play games, even if they describe someone who does.  And Steve Lawrence tries his hand at two rock and roll numbers, and he does very well, though you just know that Steve Lawrence doing two rock and roll numbers is enough to have the rock critics screaming "Blasphemy!"  Or laughing uncontrollably.  Which means Steve was doing something right.

I'm assuming As the World Turns has nothing to do with the soap opera.  I do know (thanks to Wikipedia) that singer Ginny Gibson was actually Virginia Nelson, and that she sang on the Chiquita Banana TV commercial, among many other TV ad spots.  Now we know.  Sally Sweetland's Jambalaya is pretty good, and her voice is even more of a contralto than Jo Stafford's, unless maybe the Waldorf label slowed this down a little for the pressing.  It does sound a little draggy.  Needless to say, Sally is not imitating Hank Williams.  Chuck Lovett's Short Fat Fannie is a cover pretty close to the original--the label is Gateway Top Tune (1957).  Looking up "Chuck Lovett," I got a bunch of Manson "family" matches, since there was a Chuck Lovett in that group.  Charming.  Two June Valli sides follow, the first--From the Wrong Side of Town--featuring Valli's usual Elvis-style over-selling, though the theme is interesting, since it would become a cliche in rock and roll.  It was written by country songwriter Harlan Howard.  The second, a nice Leiber-Stoller number, has Valli in a far more subtle mode, and she should have tried this more often.  She's double-tracked on the bridge and twice on the hook.  No, three times.  Whatever.  She fooled me at the end.  This predates Spanish Harlem, of course.

We continue with two 1951 very pleasant easy listening sides (I guess they wouldn't be easy listening if they weren't pleasant) on the Rexford label, which I never heard of before finding this or since, and they're by Norman Greene, a big band trombonist who played with Louis Armstrong.  Bob Sharples, aka "Lightnin" Bob, gives us the Hurricane Boogie, complete with prerecorded sound effects.  We end with three cheap-label covers, the most interesting being the Bell label Little Darlin', which either by accident or intention sounds more like the Gladiolas original than the Diamonds cover.  It's a gem.  Come to think of it, I don't think I've heard a bad fake-label version of Little Darlin', though all fall into the cover-of-a-cover category.  Except this one.

You just have an incredibly deep well of music!!

Never been fond of Two Hearts, but it works better as a doo-wop special (Rudy Weldon, Doodlers, who are excellent) than in a Sinatra-style quasi-R&B rendition.

I like Monty, but don't have many of his records for some reason, although I have a large easy listening collection.

Artie Malvin was a talented singer, but he gets a little melodramatic here. I like the song.

I prefer Bud Roman to Tony Bennett, who is kind of overbearing in this piece, although Bennett handles the bridge better. Lew Raymond's band was a little raucous.

Steve Lawrence is really good in Leiber-Stoller, even though this material wasn't his strength. I like the Dick Jacobs arrangement. He had a feel for this type of thing. Speedo is better by the Cadillacs.

Ginny Gibson is very good. I don't think Sally Sweetland usually sang this low, and you're right, it drags. I think it should be repitched - link below.

Short Fat Fanny was one of the great records from this period, and this copy is pretty good, although not a patch on Larry Williams.

I have quite a few June Valli records, although I don't really like her that much. (Go figure.) She could belt, though. I've never heard this Leiber-Stoller song, which I like a lot, although one could imagine it better done by the Drifters.

Do you think the speed of Hurricane Boogie was manipulated? I took it down a bit. (link below)

You didn't comment on the Checkers, who for me are a highlight of the set. The bass is almost as good as Jimmy Ricks, and has a wonderful relaxed charm. Apparently he was Bill Brown, the lead on the Dominoes' "Sixty Minute Man."

The Gladiolas cover is great fun!

Haven't checked your link yet--can't wait. I agree that Two Hearts works better when done in a fluent R&B fashion, because the moment it's the least bit stilted, it loses everything.

I think a melodramatic approach is the right one for "Eleventh Hour"--to me, the tune doesn't work unless it's overdone. There's just something too blah about this cover, like maybe it was time to wrap up the eight-hour cover-recording marathon and everyone just wanted to go home. I think it's Jack Richards on Broadway who does a fabulous cover. I even have a very cheap and quite bad cover that manages to get the feeling across.

Yeah, Raymond's band sounds a little under-rehearsed. I agree Roman does a generally better job, and his "up" in "my fate is up to you" is right on pitch, as opposed to Tony's painfully flat try. That closing cadence is even a bit off-kilter on the Bennett.

Exactly my take on "Rock Love"--okay vocals, terrific sax break. It's similar to the one on the original.

The problem, of course, is that Lawerence's voice is too conventionally good, but yes, he's very effective. I love that he put his heart into this--pure professionalism. Naturally, his "Speedoo" misses the mark--fewer songs are less suited to pop covering--but Steve manages to be not bad.

Eager to hear the pitch-corrected Sweetland. It's so oddly draggy. (Oddly draggy?)

Yes, the singer is no Larry Williams (who could compete with Larry?), but it's pretty raw by cheapie label standards. The worn condition probably helps!

Yes, the Drifters would have nailed it, but it's amazing to hear this happening in 1957 on a solo pop record.

I wondered about "Hurricane Boogie," too. The pianist has major chops, but it sounds almost step-recorded in spots.

I forgot to mention the Checkers? Darn! Yes, they're fabulous, and I had no idea it was the "Sixty Minute Man" bass! Cool. I had (and apparently lost) a Song Hits magazine which listed the lyrics to Sixty Minute Man alongside regular pop lyrics (!), with apparently no one grasping what the words are about. Or maybe they knew, but figured what the heck. Rock writers have a tough time with the issue of dirty R&B lyrics. On one hand, they want to paint the parents of the time as idiots, as wrong-headed in their complaints about such lyrics. At the same time, they delight in bragging about the sexually up-front nature of the songs. In other words, the parents had a valid complaint. It's simply a conflict between the more open attitude toward sex in the black community vs. the less open middle-class white attitude. It's not complicated, and it gives us no cause to paint Eisenhower Era adults as idiots. But the rock writers do what they're paid to do. People forget that writers are working for employers....

The Gladiolas cover IS magnificent, and from Bell, of all labels. They generally took a safer route than even Enoch Light.