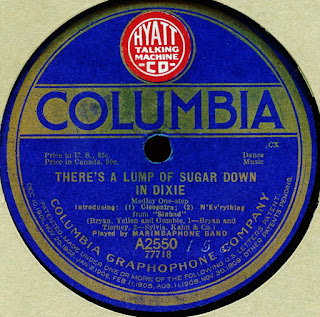 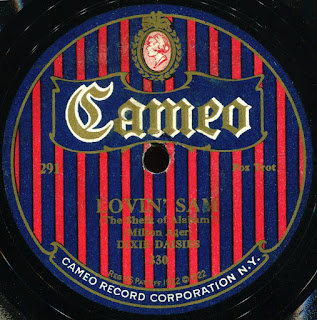 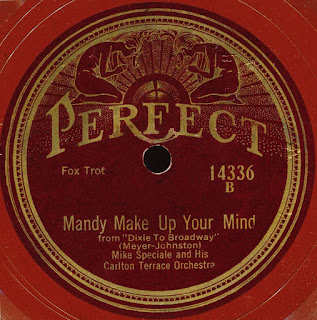 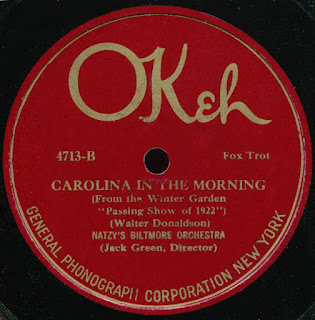 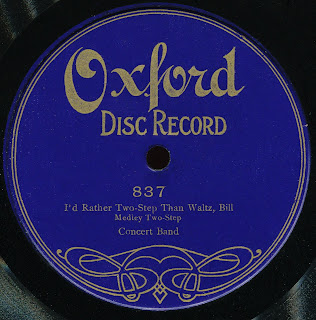 So, I have a new, more powerful PC, but I have to do my CD burns at a slower speed, or else there's trouble.  I guess logic plays no part in any of this....

Sorry--just typing out loud.  Today's post (it'll be tomorrow by the time I'm done) consists of no fewer than 20 shellac sides, starting with the 1915 Columbia 12" Medley of Indian Songs by Prince's Band.  These, of course, are not authentic Indian songs but rather pop songs on Indian themes--Red Wing, Silver Heels, Hiawatha, etc. 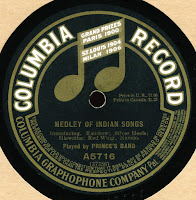 We heard a charming 1905 version of Silver Heels in the last 78 rpm post, so if that melody sounds familiar, that may be the reason.  And we have nine dance sides from the 1920s, plus an almost-1920s dance side--the 1919 In Your Arms by Ben Selvins' Orchestra, a medley which "introduces" the number I Know Why.  In the early dance band days, arrangers would often include the chorus of a second song to break up the monotony--hence, "introducing..." 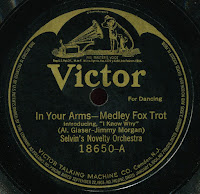 Contrary to what some people insist, evolution is a linear process--linear in the sense of an unbroken line (like a family tree--branching out in all directions but with no gaps).  But of course evolution never happens in a straight line, and so any generalization I make about the evolution of dance band arranging is going to be wrong.  For instance, generally speaking, the earliest (1910s) dance band charts repeated the chorus (aka refrain) of a pop song without any variation in treatment.  Then came Ferde Grofe and his anything but monotonous approach--an approach that bordered on theme and variation--which included trading off the verse and chorus of a song instead of importing the strain of another tune.  And highlighting and/or contrasting sections of the orchestra, a la big band.  But, of course, that's an overgeneralization that borders on vast.  Anyway...

Today's 1920s sides all have that classic Twenties flavor--arrangers striving for variety in their charts, trying for new sounds.  Ironically, all that striving for variety is what makes these sides sound so dated today.  But dated in a fun way.  At best, in a way that has the listener marveling at the arranger's ingenuity.

Then we have 1907's I'd Rather Two-Step Than Waltz, Bill, which, fittingly, is a two-step.  And two paragraphs back, I talked about "the earliest (1910s) dance band charts," so what's up with that?  This disc is certainly dance music--two-step is a dance, of course.  But it's not dance band music in the modern sense.  It's too much like straight ragtime, and the orchestra's stiff handling of the syncopated rhythms doesn't help.  Dance and dance band (or dance orchestra) music has always existed, of course.  Probably as long as music itself.

Not so the saxophone--it's from the early 19th century.  You just know an instrument as complicated as the saxophone couldn't go back to, say, the year 900.  Anyway, the 1904 Carnival of Venice features stunningly virtuosic noodling from Jean Moeremans.  I read an on line piece which refers to Moeremans' tone as flat, and I suppose it is, especially when compared to the goofy sounds extracted from the instrument in the 1920s, when saxophones went from pop novelty to pop staple.  But what stands out as hopelessly out of fashion to my ears are the highly impressive but absurdly over the top arpeggios, plus the fact that the side is the same musical section over and over.  It's like we're eavesdropping on an 1879 parlor music performance, only it's 1904 and the performer is world-class.

This does sound like an excellent listen!!!!!
I have never heard of the sharing site given in the link though;
http://prince%27s%20band%2C%20waring%27s%20pennsylvanians/

I don't know what happened there. I just redid the link and it seems to be working now. Let me know. Sorry about that!

Thanks, Lee - always interesting, made more so by your enlightening comments.

Yet another superb compilation from the Maestro of Shellac. Thanks Lee. Regards, Bob

Thanks for the nice words!

I'll 2nd Buster-n-Bob's comments. Exceptional transfers Lee, the music's upfront and clear and the surface noise is very low. I always look forward to the 78 posts. Much appreciated

Thanks. I'm happy to hear you describe the music as clear and upfront, because that's what I strive for. I focus on what can be saved, not on what I'm going to cut. I cut as an afterthought. I just processed some super lo-fi Varsity label 78s of the late 1940s (post coming up), and it took three levels of tweaking, all devoted to pulling the "good" sound out of the mix. Without the ability to save my audio tweaks in individual levels, building on previous results, a lot of what I do would be impossible. Unless I had a bunch of expensive analog filters filling a room....