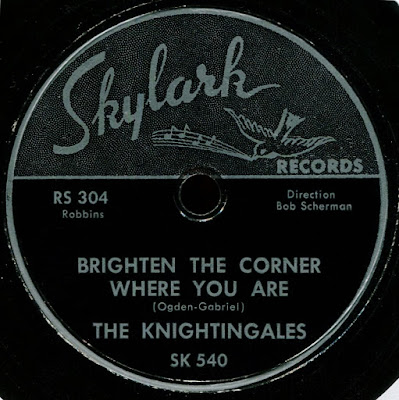 This series is all Ernie's fault.  Er, I mean, it's all Ernie's suggestion. He said, "Lee, when are you going to put together a best-off with all your favorite gospel tracks?  That oughta be an interesting listen. :)"  Sounded cool, so I got to it right away.  And I lost count of how many tracks went missing as MAGIX blinked out repeatedly.  Some intricate 78 work went to the next realm, including a very precisely edited track that I finished two or three times, only to lose everything with each blink-out.  That's when I wrote my MAGIX post.  My brain has already blocked out most of that, and here I am up, dredging it up.  (Cue Halloween scream.)

Anyway, as I noted last post, MAGIX is behaving now.  And, despite the lost tracks, I still manged to get about fifty ready.  Some of these were ripped from CD-Rs, with the original LPs no longer in my possession to fill in the label info, etc.  Though I filled in every MAGIX tag on the original rips, I'm only able to retrieve the title and artist info upon re-ripping them--this is one of MAGIX's big flaws.  Examples are the group Homeward Bound, a local a cappella act from the 1970s or so, and a superb family singing group called Family Reuinion--zero info on either in cyberspace.  Oh, well.  At least I have the tracks.  I was surprised by a few of the internet no-shows--for instance, Rudy Atwood's solo version of Send the Light.  Atwood was an extremely well known gospel musician with a large discography, but danged if I can find where that one originated.  I have it, so it must exist.  (Logic 101 in action.)  A number of these come up in deranged form on my Windows Media Player--the track credits, that is--so I hope you have better luck than me.  Just go by the playlist I've typed out.  My player is insisting, for instance, that he Good Twins and Anita Byrant are one and the same, and simply because of a track/album title correlation.  If WMP can't correctly retrieve info from whatever source it's using, I wish it would simply not try.

And these are some of my favorite gospel tracks.  And tunes.  Charles H. Gabriel (1856-1932) is my favorite gospel tune composer (he wrote some remarkably good texts, too), and I've provided six versions of his 1890 missionary classic, Send the Light, for which he did words and music both.  For such a famous number, recorded versions aren't that easy to find.  I have the hymnal in which it likely originated, and so I can report that there was originally a middle section featuring a bass lead--a section that was axed as the song's fame spread and its appearances increased.  It was more in the nature of an anthem, originally.  Anyway, we get the Chuck Wagon Gang's recording, plus the Fairfield Highlands Baptist Church Choir's more authentic take, and the World Action Singers' groovy 1974 rendering.  And we get a bluegrass gospel instrumental serving up.  (Does that work as a noun?)  Gabriel's Brighten the Corner Where You Are, from 1913, has been recorded by any number of folks, including Ella Fitzgerald--it served as the title of her 1967 Capitol label LP of hymns.  She's not in this playlist, but we do get the Statesmen with Hovie Lister, Homer Rodeheaver, the Criterion Quartet, the Browns, a happy-time group (in an Art Mooney mode) called the Knightingales (from 1952 or 1953), and we would have had the Chuck Wagon Gang recording, had their track not gone to the great beyond during one of MAGIX's interdimensional excursions.  Oh, well.  Corner was tremendously famous at Billy Sunday meetings of the 1910s, and it's more 1913 self-help than gospel, though that hasn't stopped it from becoming a sacred classic.  The words, by Ina Duley Ogdon (commonly misspelled "Ogden") are ingenious, and the music is still catchy after more than a century.  Thought it would make a fun time trip to hear it played in different eras.

Pentecostal Fire Is Falling is a 1912 masterpiece by Old Rugged Cross composer George Bennard, who did words and music in this case, and the Circleville Bible College Choir sings it well, and with much spirit.  I'd have said "with much fire," but I didn't think of it in time.  Circleville, Ohio isn't all that far from where I am, by the way.  Palms of Victory and Deliverance Will Come are the same number, written in 1836 by John B. Matthias.  If it sounds like Stephen Foster's Oh! Susanna, it's actually the reverse--this came out twelve years earlier.  And we get three tremendously good Ira Sankey numbers--Under His Wings and There'll Be No Dark Valley--both beautifully sung by Family Reunion, and A Shelter in the Time of Storm, in a magnificent solo version by late George P. Zinn.

Millicent D. Kingham's tune for God Is Working His Purpose Out may be my favorite hymn tune ever.  She wrote it in 1893, and for some reason, it's not the standard one used for the hymn.  I had a time finding the original music for church  This 1961 recording, by St. Paul's Cathedral Choir, is absolutely wonderful.

Thanks, Lee - great idea that you and Ernie had, and I am sure great execution.

I welcome this project, Lee. You come up with some wonderful Gospel music, your posts are always informative, and your restorative skills are the stuff of legend. Okay, that last part is hyperbolic. Out here in El Paso, where I've lived Lo! these many years, we're kind of bummed about the reason we're in the news. Your presentations of the Good News is like unto a balm in Gilead. Or a letter from home. Thanks for all you do!
Zoomer

Thanks for the kind words, and I hope this series holds up over the next few weeks, that it continues to remain interesting and inspiring and comforting. It's a risk on my part, because I'm sharing those selections that mean everything to ME, with no guarantee they'll impact others the same way. I'll be doing a lot of title repetition, but only with titles which, in my view, demand repeat exposure. Songs which actually benefit from it. The ultra-talented hymnists and tune writers who gave us the best of gospel possessed that special and amazing ability to produce numbers that sound fresh 1,000 times later. It's an incredibly rare tunesmith who can come up with a "Send the Light," "Revive Us Again," or "Angel Band." These numbers were literally churned out for the gospel songbook industry, and there are cultural elitists (for want of a better term) who would fault these songs on that basis. Sure, they WERE assembly-line products, but to me, that makes their sheer quality all the more admirable and amazing. My parents had me study piano for 10 years, and so I love the "classics," but I think I love these sacred tunes of the people even more.

I've now listened to the collection twice, and loved it. The tunes do stand up to repetition, indeed.

Looking forward to "Angel Band" - that's a good one.

I finally stumbled upon my lost Statesmen LPs, including the one that starts off with "Brighten the Corner." That and your compilation did "brighten my corner" for sure.

Blame me, I can take it!

Sorry, I was in Italy for a while, just got back last night and I'm jetlagged. I'll give it a listen when I get a chance.