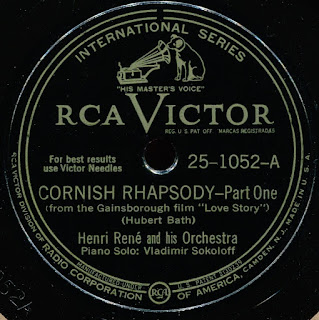 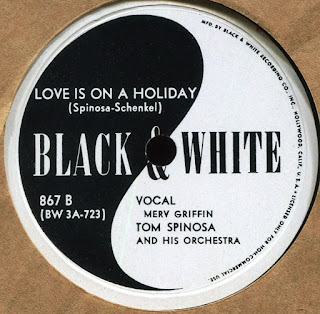 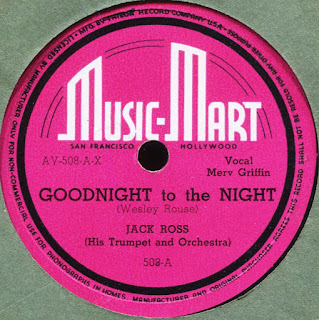 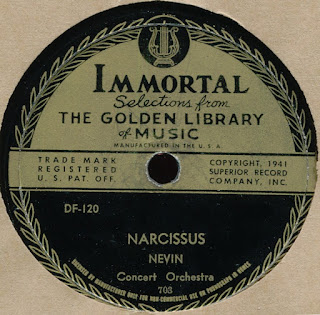 So, if you're just itching to hear G. Verdi's Mandolin Orch., the Lacalle Spanish Band, early Merv Griffin, and Joan Sawyer's Persian Garden Orchestra, why, you stepped into the right place.

Merv croons on six of our sides, with bands led by Freddy Martin, Jack Ross, and Tom Spinosa.  I found a rave July, 1948 Cash Box review of the Tom Spinosa track (on line, of course): "Get an earful of this choir boy, Merv Griffin, and remember him.  Here's a warbler who has tremendous possibilities.  He makes a terrific side of 'Love Is on a Holiday.'  His new style, full mouthed singing of a grand tune, with very swell background support from maestro Tom Spinosa, opens the way for lots of play from plenty of juke box fans everywhere."

Adds the reviewer, "Griffin is sure to grow on you the more you listen to him." Wow.

Griffin is certainly good on the side, but I don't think the disc went anywhere.  Griffin, however, took his first step toward the big time that year when RCA's Freddy Martin hired him as his regular vocalist.  I've ripped four fun Merv/Freddy sides, plus one more pre-Martin Merv--Goodnight to the Night, on the Music-Mart label. I'm happy to report that the tune is much better than its terrible title, though freeing Merv's voice from the muddy audio mix took some EQing and sound-curve adjusting--luckily, I had the will and the software.  (The will leaves the software to the cats.)

Speaking of software, I just switched to the new version of my MAGIX program, after umpteen crashes on my old edition as I prepared this post.  (I thought I'd solved the problem, but... surprise!!)  So far, the new program is cooperating, and that too-small waveform display I was complaining about?  It's easily enlarged.  So far, so not awful.

We really do some era- and style-hopping here, from a rare 1915 African-American string band (Joan Sawyer's Persian Garden Orchestra, 1915) to a goofy 1928 International Novelty Orch. (Nat Shilkret) rendition of the Jolly Fellows waltz (you'll want the music, of course), to Bix Beiderbecker, Frank Trumbauer, Joe Venuti, Bill Rank, and Steve Brown performing I'm Gonna Meet My Sweetie Now with Jean Goldkette's Orch. in 1927.  The 1915 string band recording is one amazing 78--its historical importance is epic, even if the sound quality is not.  Hard to figure, because even back in 1915, the label--Columbia--was capable of reproducing drums and violins with decent results (flute, maybe not), but everyone sounds too far from the recording horn.  A tragic shame.  Not to brag, but, as bad as it sounds, my rip is much better than the two taken-from-CD versions at YouTube.  The transfer on the That Devilin' Tune CD is abominable.

And, as I listen again to my rip, I'm pretty impressed.  Surprised is more like it.  Meanwhile, as I play the track, WMP is referencing the cover art of a commercial rip.  Thanks, WMP.  I work my tail off, and you credit my work to someone else.  Nothing personal, but please expire in Hades, WMP.  Thanks.

Benny Goodman's 1945 classic Rattle and Roll (no Shake), was a 78 with no high end before I adjusted the curve and EQ'd everything--a tough balancing act, but I got the drums up front and brought out some detail in the brass without removing their punch.  By contrast, getting good sound out of Juan Lacalle's 1926's Plus Ultra was a breeze--it pretty much knocks the needle out of the grooves without help from MAGIX.  The song is about a Spanish hydroplane.  But you knew that.

The Humphrey Bogart Rhumba puts the "priceless" in "priceless title," but the music hardly measures up--a very mild tune, competently performed by Freddy Martin's band, which could be brilliant when it had the chance, which wasn't the case here.  Ah, but 1950's Mambo Jambo is magnificent, with Martin's band performing in killer style and Merv somehow keeping the lyrics in tempo.  One of Freddy and Merv's novelty masterpieces.  Love Is Such a Cheat is almost as good, and Merv again has to race against time to not miss a beat (was he taking lessons from Danny Kaye?), so where are the smooth Merv/Freddy ballads?  On tracks seven and ten.  You're welcome.

Ralph Marterie's big band version of Chuck Berry's Maybellene--sung by Ralph himself, no less--should be hilarious, but it works for me, and it has a nice R&B flavor.  And where does Andre Caplet's gorgeous 1911 orchestration of the first movement from Debussy's Children's Corner Suite fit in with all this?  It doesn't, but here it is, anyway, in a 1932 recording by the Paris Conservatory Orch., conducted by Piero Coppola.  And we get Henri Rene's terrific 1946 10" two-sider of Hubert Bath's Cornish Rhapsody, plus a very interesting military band arrangement of Irving Berlin's Alexander's Ragtime Band, plus a beautiful Percy Faith version of Embraceable You from 1944 on the Decca label, and my first 78 restoration on my new software--the 1925 Victor 12-incher, Gems from "No No Nanette."  Which features gems from (you'll never guess) No No Nanette.  Oh, and an anonymous version of Ethelbert Nevin's Narcissus, from a series called Immortal Selections from the Golden Library of Music, copyrighted 1941.  This set may have been the prototype for all those "Immortal Classics"-style TV ads of the 1970s.

Oh, and gorgeous 1929 sound on two Columbia discs featuring G. Verdi's Mandolin Orchestra of Livorno, Italy.  I think this group is number 1,476,328,921,850 on the most-Googled-orchestra list.  And how did I find out the 1929 release year?  From a copy of Phonograph Monthly Review at the Internet Archive.  How else?  I first tried using the matrix numbers, but no go.  Then, a 90-year-old magazine to the rescue.

To the shellac.  And to those who would charge that my playlist has no trace of a theme, I would say, "That's true--it doesn't."

Lee
Posted by Lee Hartsfeld at 8:54 AM

I've been itching to hear some early Merv Griffin, and here it is! How did you know?

Lee - This is a great collection! I am just back from a trip and catching up. Very pleased to find this waiting for me.

I have to admit I have not paid attention to your Merv posts in the past, but I did listen to these, and discovered he was quite a good crooner. I really liked "Love Is on a Holiday" in particular. I had not heard of Tom Spinosa, so I looked him up. Apparently in later life he ran for office in San Francisco 21 times, losing every election.

Also was impressed by the Freddy Martin band. I posted his recording of the Sabre Dance recently along with a Woody Herman version. Freddy's group was clearly superior. He even does a creditable mambo.

I liked Ralph Marterie's record, but then I enjoy his band. His "Maybelline" is more Phil Harris than Chuck Berry, though. Listening to him demontrates how much Berry relied on Arkie Shibley's "Hot Rod Race." But I suspect that Arkie's record was indebted to others as well. His country version of the talking blues was inspired by Tex Williams, I imagine.

The Cornish Rhapsody has long been my favorite quasi-Rachmaninoff piano concerto. This version is not the best I have heard, however.

I much enjoyed the early records - you do such a great job with acoustics!