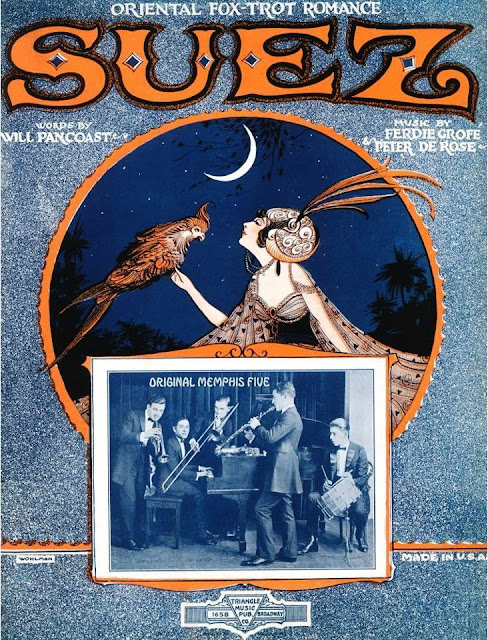 Today's Grofe.  Or tomorrow's.  Or next week's.  I'm flexible.  Ten selections this time, and a neat Grofe mystery. It concerns Ferde's Blue Nocturne , heard here on a Paul Whiteman radio broadcast (the boxed set doesn't say which one), and there is no doubt that a Blue Nocturne by Grofe existed--I found the 1945 copyright entry on line.  So, it's not a mislisting.  But we also have Stanley Black performing a Grofe number called Deep Nocture, from the 1977 Valentino soundtrack, and it, too, was copyrighted by Grofe--in 1947.  So, two different pieces, right?  Nope.  Same piece.  For some reason, Grofe decided to retitle it, I guess.

So we have the Blue and Deep nocturnes, with Black giving the latter number (identical to the former) a beguine rhythm (or is that a rumba?).  And I think I need a six-pack of Bud right about now.

Today's offerings also include the 1922 song Suez, an "oriental fox trot romance" by Grofe and Peter (Deep Purple) De Rose.  And, speaking of Peter, I've always strongly suspected that Grofe's Blue/Deep Nocture was inspired by De Rose's superb (and way better known) Deep Purple, which began life as a "symphonic jazz"-style piano solo in 1934, featuring a hand-stretching parallel-ninth-chord intro that was old news in Classical music, but quite modern for pop.  Purple went from  piano solo to concert piece in 1935, when Domenico Savino arranged it and Paul Whiteman played it on the radio.  So my source tells ms.  As much as I like Grofe's nocturne, it's not up to De Rose's piece, which was in turn not quite up to the composer who inspired it--George Gershwin.  Who, in turn, got much of his shtick from Debussy, Rachmaninoff, and Ravel, and... I'm getting dizzy here.  Where's my six-pack of Bud?

From the LP Adventures in Music, Grade 4, Vol. 1, we have the Desert Water Hole movement from Grofe's very entertaining Death Valley Suite, and it was probably deemed educational for kids because of the ingenious (however corny) Oh! Susanna medley.  My vinyl copy has bubbles in the surface, but I denoised them best I could.  I reduced them to a minor nuisance, and they occur mainly during the big pause.  Then, from a 1967 U.K. Columbia LP, a beautifully-recorded (in stereo) piano roll performance by Grofe--as "Ferdie Grofe"--giving us Hard Hearted Hannah.  The Ampico roll dates back to the 1920s--1924, very possibly, which was the year of the song.  The jacket does not say which Ampico roll or when.  Grofe certainly had cleaner technique than Gershwin--maybe this was because Grofe's formal schooling went well beyond Gershwin's.  And we have a gorgeous Old Crole Days (from Mississippi Suite), arranged and performed by Carmen Dragon on the Nightfall LP (highly recommended); then, a fabulous rendition of the Over There Fantasie by the United States Army Band; moreover, three memorable On the Trail renditions by, among others, the great Myron Floren; and, as mentioned above, a recording of Suez--Clyde Doerr's Orchestra, 1922.  It sounded not so great on my after-market Stanton 500 78 needle, but my highly-rated Japanese after-market 600-series 78 needle did a majorly better job on it.  To my relief, I should add.  I won't say this playlist will change your life, but it may.  Who knows?  No way to be sure until you download.

This looks enticing. Having heard the last item, I can testify that it is highly entertaining!

Your notes are, as always, entertaining and enlightening.

I think the world of Gershwin as a composer, but his pianism has always left me cold. He tends to rattle things off like he has a bus to catch.

Very nice play list. I listened through from begging to end and remained thoroughly entertained for the whole 40 minutes or so. Just what I needed after a bout of stomach flu followed by a toothache that resulted in it being pulled - not to mention straining a muscle in my arm when I slipped on the ice and tried to brace myself against the snow berm. (I guess I mentioned it after all) I may survive the winter yet. Feeling pretty good, if not giddy, at the moment. I may have to play these tracks again and do a little dancing. Great stuff.

Thanks, Larry! Glad to hear my music is helping, but sorry to hear about your bad times. Good grief. I've been so lucky in neither falling nor getting the flu this winter, but there's still time. I had about four teeth pulled last year, though--a nice, new, uncomfortable "appliance" now fills in for most of my upper row.

Keep grooving to Grofe, and be careful!! Hope you continue to feel good. You deserve to! Really sorry to hear about your misfortunes. Get better!

I think Ferdie & Fergie should do a duet. Not sure which track is best though. With Will.I.Am to produce it, it should be groovy and Grofe-y!

Lee, Did Grofe write the arrangement for Paul Whiteman's 1921 recording of "Song of India"? It is quite ingenious, with marvelous dissonances in places. Whoever did the job did it superbly. I so prefer this to Tommy Dorsey's swing version. Am I being musicologically incorrect? I sure hope so.

Going from memory, Paul Whiteman was the arranger. The electrical recording (again, I'm going by memory) was Whiteman AND Grofe. The wonderful dissonances are a result of the tonic ostinato in the bass. It really builds up tension. During one of my rare visits with my father during my Navy time, I played the record for him (I think it was the electrical era redo), and he found the ostinato very interesting. My dad was a jazz arranger. Kind of amazing, really, given that Whiteman's "Dance of the Hours" arrangement is comically dated. Whiteman quickly figured out he needed someone else to write the charts.

That is, amazing that "Song of India" is so advanced in comparison to Paul's almost absurd "Dance of the Hours."