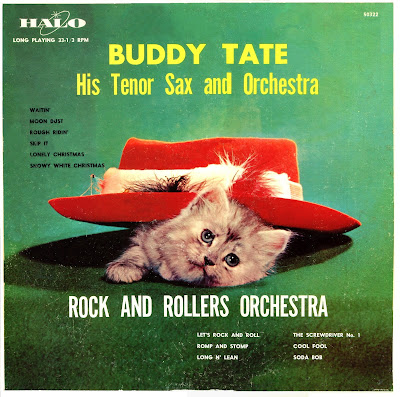 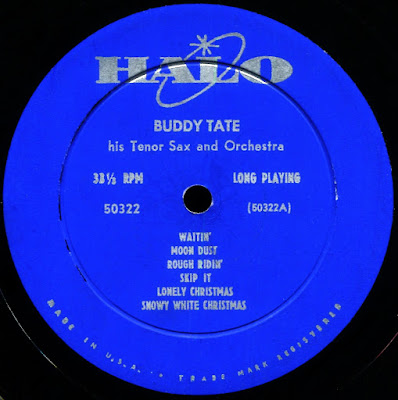 Look at that cover--I had to grab this one.  This was an inexpensive eBay acquisition--I'm still Covid-avoiding the thrifts.  Too many central Ohioans think the virus is a joke, and I don't feel comfortable around folks who don't wear masks.  Like covering your mouth and nose for the common good is some kind of epic hardship.  But, anyway, this is an Eli Oberstein junk-label gem--from the good ol' Record Corporation of America, or, the fake RCA.  I think a lawsuit happened over "RCA" vs. RCA at some point, but don't quote me.  The copyright year on the back cover is 1957, but Discogs says 1958 for the release, so, what the heck.  1958 it is.  The sole Tate discography I found on line tells me that the A-side tracks were recorded by Buddy Tate in 1955, and for the Halo label!  The "for the Halo label" part is the surprise, since I didn't know anyone actually recorded specifically for the fake-RCA junk labels--I would've though these tracks came from some other source.  That's what I get for thinking.  And, meanwhile, I've just found a second Tate discography, though it's not as detailed as the one I linked to.

I like the Tate sides--especially the uptempo Skip It--though the two Christmas titles don't demand replays (they're kind of draggy).  And Snowy White Christmas is a certain famous Christmas standard by an American songwriter born in Siberia.  (Hint: Remove "Snowy" from the title.)  Now, if Tate indeed recorded his tracks for this label, why didn't he do two sides' worth?  Dunno.

The flip side features the Rock and Rollers Orchestra, whom nobody seems to have identified.  And it doesn't sound like the same guys throughout--I hear two, maybe three, outfits.  And it's rock and roll, all right, but not the type that hit the pop charts in the 1950s--it's the 1940s-style stuff that emerged from swing music, and I suspect that these tracks date from that decade.  No way to be sure, of course.  The sound quality goes south with these numbers, the last two sounding especially bad.  Whether the problem happened in the remastering, or if the things were just badly recorded... dunno.  But side 2 really rocks.  My attempts to fix the sound backfired, so I kept the dynamic balance as is.  You'll hear thumping bass and subdued highs, at least compared to the lighter, superior sound on the Tate numbers.

And I do think the source for r&r was big band jazz, or swing.  We've been taught for decades that r&r came together from umpteen sources--the prevailing notion, far as I know, is that parallel strands/styles, each with its own history, merged into r&r at some point (directed by what magical force, I don't know).  How else to explain the stylistic diversity in early r&r?  Well, I have a couple of far simpler explanations--1) popular forms tend to diversify stylistically as they borrow from other forms, and 2) when you have musicians from varied backgrounds involved in getting a new form off the ground, as was the case with r&r, you can expect a variety of approaches.  Popular music evolves at a rapid pace, and this doesn't leave much room for highly complicated processes to occur.  Popular entertainment is sink-or-swim by nature--something finds an audience, or it perishes.  The complicated creation theories of r&r journalism sound fine on paper, but simple is better when it comes to theories, because simple theories are testable (i.e., falsifiable).  800-page theories aren't, because they're too prone to ad hoc revising of propositions, and because they have the same probability of being correct as any other 800-page theory.  A theory that can't be tested is as useful (or useless) as any other.  It's good to remember that theories explain things--they don't describe them.  My contention that r&r came from swing is not a simplification of history.  Rather, it's an acknowledgement that change and mutation are the essence of evolution.  Those two nouns function as synonyms for it, in fact.  Rather than buying the claim that forty forms were placed in a big, magic mixing bowl, with the result being early r&r, maybe we should look for the form which mutated into r&r.  The most obvious suspect is swing.

I agree with everything you wrote, except for the notion that rock 'n' roll came from swing. From the jump blues branch of swing maybe, but not Benny Goodman et al.

When I was a kid eons ago, I would watch American Bandstand every day. Dick Clark's theme was Bandstand Boogie - a wonderful Les Elgart swing record that had nothing to do with any other music on the show and sounded out of place to this your music fancier. (I did like it, though.) Also, swing musicians playing R&R, as they often had to do back then, often were the aural equivalent of dogs walking on their hind legs.

Of course, many swing musicians ended up as session artists and thrived there, and some became producers of big-time R&R artists (e.g., Dick Jacobs and Jackie Wilson). So there are no absolutes!

Anyway, surprised to see Buddy Tate ending up on Halo!

Yes, what a comedown. I'm slightly skeptical that he actually did these sides FOR Halo, but I can't find evidence of earlier sides being reissued. Exception: the first two titles came out on the Derby label, but I don't know if they're the same recordings.

Re Benny Goodman, take a good listen to his 1946 "Rattle and Roll." And to Glenn Miller's 1942 "V for Victory Hop" (written by Ray Conniff), which has a middle section that sounds like an r&r jam. And we're not necessarily talking blues or boogie woogie--there was a standard, uptempo jam-session song scheme that circled the tonic (much like the slow doo wop ballads of the Ravens, Clovers, et al.), tossed in a traditional circle-of-fourths bridge, then returned to circling the tonic. Tate's "Skip It" may be an example, in fact--I didn't listen closely enough. This jam-session form, as I call it, saved soloists from having to navigate complicated changes. There were also song form templates taken from gospel. All of the this was happening in the 1940s, and it all sounds to me like swing gone nuts. One of my favorite R&B numbers from about 1947 ("rock and roll" wasn't a phrase yet, as you know), has two tenor saxes staying on the tonic and trading off. Not only a single-not solo, but with two guys providing it! Very effective piece, and it has an intro a la "Jailhouse Rock." I think it was called "Sure Likes to Run."

And glory be, here it is on YouTube: https://www.youtube.com/watch?v=VXDh8V8eUEc

Yes, all good points, and no doubt significant!

By the way, if you want to check out the Derby records, they are available on Internet Archive:

And the trade-off solo is not as stay-on-the-tonic as I remembered, but pretty close!

Thanks for the link. And those sound exactly like the Halo tracks. As I suspected. The Derbys are 1952, and I'd bet the farm the the other four tracks are unreleased Derby sides. Or other orphaned tracks acquired by fake-RCA.

Yeah, Oberstien bought out the Derby label when it went defunct. He got some nice recordings out of that deal, he made his money back selling those Jazz and R&B albums packed with the old recordings he obtained rights to. He also bought out Majestic, another label that had a lot of stars, but still folded.

Gilmarvinyl--Thanks for the info. I strongly suspected these were tracks acquired by Halo, as opposed to tracks actually recorded for the label. And right now I'm reading a 1949 Billboard article which reports on Oberstein buying Majestic masters from Mercury Records (!).