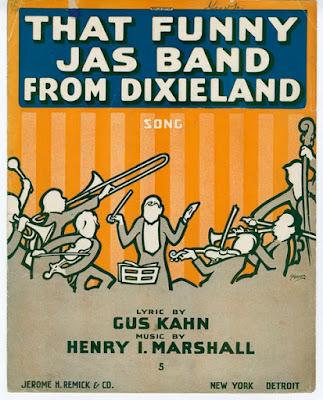 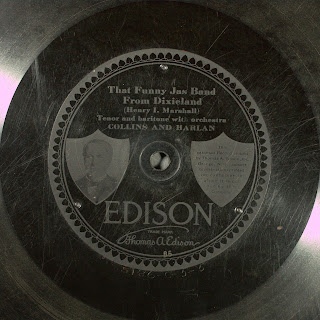 Twelve tracks, all swiped from the Internet Archive and sound-edited by me.  All of the pre-doctored rips are by George Blood LP, the outfit which uses the four-tonearm turntable.  Its sound files are superb, but sometimes they're whisper-soft, as was the case with 1916's That Funny Jas Band from Dixieland, recorded by Arthur Collins and Byron G. Harland for Edison--which, luckily, I was able to get some volume out of.  That Funny Band was released in 1917, but this take (take C) was recorded on Dec. 1, 1916.  The song title is said to be the first to mention jas/jass/jazz, but it's the band's slightly discordant imitations of Dixieland which make this recording fascinating.  These breaks were clearly meant for humor but they provide incontestable proof  that Original Dixieland Jazz Band-style was around in 1916.  Not that anyone was arguing this, but every bit of audio proof proof is precious when it comes to jazz in its earliest stages.

The record is racially offensive, of course, though it's only a 5 on a scale of 10 as far as dialect humor goes.  For its period, this rates as moderately insulting....

I filled out the playlist with Earl Fuller (Rector Novelty Orchestra) and Paul Whiteman 78s which I haven't (to the best of my memory) featured here, save for Earl Fuller's Mummy Mine, which didn't sound as good as this, and Paul Whiteman's Chicago--ditto.  The 1945 Whiteman recording of San (arranged by Bill Challis) was recorded for the Capitol 78 set The History of Jazz Vol. 2--The Golden Era, and it features original band member Matty Malneck doing his usual masterful violin solo, and... I thought it also had Bill Rank on trombone, but I guess not.  Brilliant performance, and it was the first Whiteman record I ever heard, thanks to my dad's hi-fi set and his copy of the 78 album.

I was very happy to find the superb George Blood LP rip of Paul Whiteman's 1929 Button up Your Overcoat, one of my all-time favorite 1920s sides, which features a charming Ferde Grofe arrangement and an incomparable Vaughn De Leath vocal (she gets no i.d. on the label!). 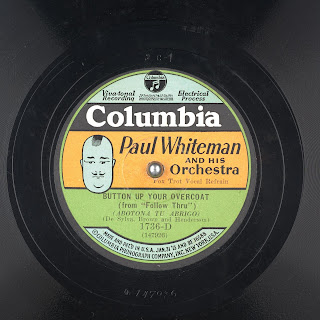 High entertaining shellac, and I didn't have to set the needle down once.... 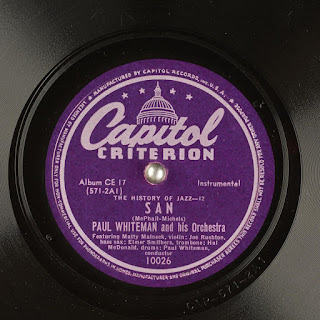 Posted by Lee Hartsfeld at 6:12 PM

Thanks - both the Internet Archive and your blog are great resources!

Thanks, Buster. Curious to get your reaction to "That Funny Jas Band." All in all, the instrumental breaks catch some of the polyphonic quality of Dixieland jazz while making fun of it. Unfortunately, the Collins and Harlan Victor version has a totally ordinary accompaniment.

I am so fascinated with the stuff I've been digging up lately at the Internet Archive. I've downloaded and played with so much stuff, it's almost filled my HD up. There's always something new to find. And yes, they do occasionally post up stuff that was recorded too softly, and I think I've seen one that was recorded too loudly, but just barely. Still looking for more details on their recording process, but they overall do amazing work!

Thanks! We're getting some spring weather, finally. Must be Nature's present to me. (Yes, I'm sure that's it....)

May I as a Happy Birthday as well. Spring is definitely nature's present to you. I live in Orlando now but I grew up and lived in Pgh, Chicago, etc most of my life. It's in the 90's here already. Sometimes I miss spring. LOL
Best wishes, stay safe,
Gary

You too, Gary. Thanks!

Lee - Very interesting recording, that Collins-Harlan piece. It's a standard cakewalk until you get to the instrumental breaks, where the musicians, as you aptly put it, play ODJB-style breaks while parodying them as well! And this before the supposedly first jazz recording. Assuming that Collins and Harlan were recording a routine (which they may or may not have been doing - this doesn't sound as polished as some of the vaudeville numbers I have heard), it suggests that audiences in at least New York were aware enough of the ODJB style to get the references. Or at least Collins and Harlan's accompanists were!

The Discography of American Historical Recordings does not list musicians for either the Edison or Victor recordings of the tune. The Edison was made in NY, the Victor in Camden. The Victor was led by house conductor Rosario Bourdon, who may have banned the jass band imitations heard on the earlier Edison recording.

Nice selections, and well ordered. I couldn't put it down. This definitely goes into my play again folder.

If Paul Whiteman were still around, I'd be astonished... er, I'd buy him a ginger ale.

But Paul Whiteman is still around, because of people like Lee who take his old records and make them available to people like us to listen to and enjoy again. When I'm long gone, there won't be much left around for people to remember, but for artists like this, they may well live forever as long as there are folks who care.

Happy belated birthday to you, Lee! And thanks for the in-depth birthday present to your readers... plus restoring to Ms. Vaughn de Leath the credit she merited.