I was going to start by describing this as one of the odder Beatles knock-offs.  But it may, in fact, be the oddest.

The Beatle Beat, Featuring the Blue Beats.  That's what it says on the front jacket.  So what does it say on the back jacket?  "How to Do the Twist" (Reprinted from The Fred Astaire Dance Book).  How to do the Twist?  So, uh... to do the Beatle Beat, one must first master the Twist?  Wouldn't a "Beatles Beat" tutorial have made more sense?  This is a level of front jacket/rear jacket disagreement that rivals anything from Synthetic Plastics Co. or Halo, Allegro/Royale, and Ultraphonic.  So, what exactly do we have here?  A discotheque collection repurposed at the last minute to siphon some of the Beatles cashflow?  That seems like the closest thing to a logical explanation.  But couldn't they have come up with a more creative fake-Beatles name than "The Blue Beats"?  That sounds like a quartet of depressed poets listening to Miles Davis albums when they aren't accompanying Slop and Mashed Potato contests.

Nothing, however, can compete with the hideous cover art, which has a group of kids dancing (Twisting, Frugging, Hully Gullying?) under a massive Beatles wig.  Doesn't it look like the wig is consuming them?  Maybe that's a bit of social commentary.  At any rate, the dancers seem to be leaning into the giant wig, as if caught by surprise while doing the Rock-a-cha-cha, and this huge prop has just landed on them. 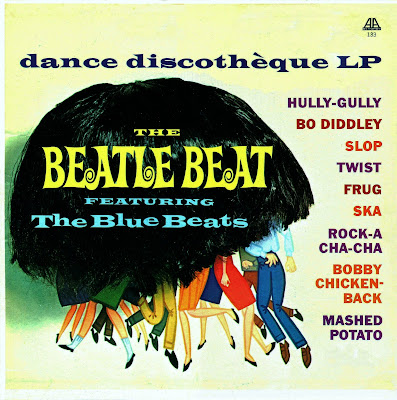 One look at that cover had me remembering the carpet monster from outer space in the Z-movie classic The Creeping Terror (1964--same year!).  Specifically, the scene where the monster invades a dance hall and struggles its way through a cluster of tables and chairs while the patrons stand by a back exit, making no attempt to get away.  Heck, as slow as the thing was moving, they could have walked past it and gone out the front: 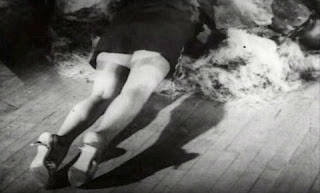 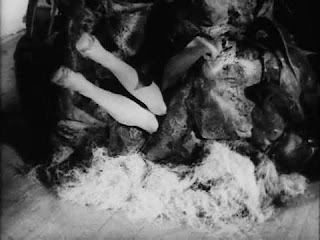 Here's the Creeping Terror dance hall scene on YouTube, taken from a terrible print. Which is apt, since the sequence features what is possibly the worst editing job in film history.

Now, A.A. Records (which gave us Golden Record and Wonderland Records) wasn't the cheapest of the cheap, by any means.  It issued collectible stuff like At Home with the Munsters (featuring the TV cast), Roger and Over with Roger Price, the Famous Monsters of Filmland classic Famous Monsters Speak! and Huckleberry Hound for President (apparently authorized by Hanna-Barbara)  Yet, here it's giving us a Beatles knock-off that's less of an actual knock-off than even the Palace label's Beattle Mash.  How to explain?  Maybe the easiest option is to simply accept.

The music is fun, if monotonous, and well recorded and played.  So, it's discotheque rock and roll, all right, and every dance from the Slop to the Frug to the Rock-a-Cha-Cha (Rock-a-Cha-Cha??) to the Mashed Potato is represented, so everything about this album rings true--except for the "Beatle" part.

The titles are confusing as heck, since they're all followed by the name of the dance they go with.  Which would be fine, except that, in a number of cases, the dance names are part of the title and not just an addendum--for instance The Blue Beats' Ska.  Or Jack's Chickenback.  On the mp3 tags, I used dashes in front of the dance types, because I have no means of italicizing any part of the tags.  This resulted in some strange names, like One-Two--Hully Gully.  I guess there's no way to make this LP make any sense.  So, enjoy! 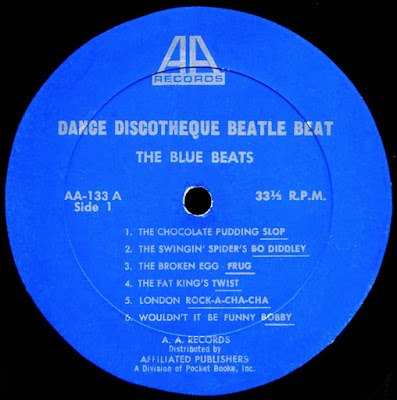 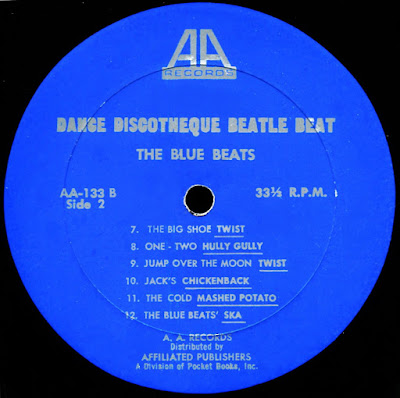 Lee
Posted by Lee Hartsfeld at 9:18 AM

I did not know that there is a Roger Price album.

You're right--"Bobby" and "Chicken-Back" aren't separated by a space, so it does appear to be the "Bobby Chicken-Back." Together or apart, both sound completely made up. "Bobby" has a British sound, but how would that translate to a dance? How does one dance like a British police officer?

The Roger Price LP is hilarious--I've had it forever, having bought it in the cut-out bin at a long-gone chain called Arlen's. 99 cents, I think. It's listed here at Discogs: https://www.discogs.com/Roger-Price-Featuring-Sascha-Burland-And-Don-Elliott-And-Vermont-Jazz-All-Stars-Roger-And-Over-With-/release/3740464

It contains a fake history of jazz that satirizes the traditional narrative of the time, and it also has a band of "Sound Droodles." I should put it up sometime. I was ten or eleven when I bought the LP, and I knew who Price was from my dad's extensive MAD magazine collection--Price was an early contributor, as you might know. My copy had defects in the pressing--raised areas on the vinyl. But I was able to remove them. I should post the thing sometime....

Hm. I repeated myself. ("I should put it up sometime.") I must have an intense urge to post the LP....

I would love to hear it, when you have a chance. It seems to feature the Nutty Squirrels as well, or at least their human progenitors.

Oh, Sascha Burland! Who's still with us at 92--cool. No Nutty Squirrels on the LP, but a lot of jazz by excellent musicians--most of it poking fun at the different eras of the form. There's also a send-up of R&B. My guess is that Burland was behind the musical portions. I refer to "A True And Authentic History Of Vermont Jazz," which includes two of my all-time favorite lines: one, regarding maple sap (which Vermont ((!)) jazz pioneers used for a high) being safe and non-habit forming, "...unless you try to stop." The other, following a send-up of be-bop: "There was resistance to this music. In fact, to understand bop, one had to be... drunk. That helped." Price's introduction of each jazz musician is hilarious, too. The studio tracks (on side 2--the first side is live) were obviously considerably spliced, but this doesn't detract from the overall effect. Yes, I need to put this up.

Considerably spliced together, or whatever. Price must have been a perfectionist, like me. Interesting that he was from WV, because a shade of a Southern accent can be heard in his voice, though he toned it down a lot.

Looking at this hideous cover, I'm wondering if this was an overprint, either onto an earlier album, or something that was added at the last minute as soon as they saw a fad they could latch onto. I wonder if you could find an album that used the un-Beatled cover art? Hmmm...

Well, looks like there was another release, but not with a similar cover.

Hi, Ernie. Thanks for finding that jacket image. I somehow missed the "Hullabaloo And Shindig Too" listing at Discogs--weird. It's possible I did a title search, in which case the "Hullabaloo..." LP wouldn't have shown up.

Re the CD, I saw it listed at Discogs, and so I checked Amazon, where I didn't see it. Well, it's there, but credited to "The Blues Beats" instead of the Blue Beats. I'm guessing that's why I didn't catch it. At any rate, it's not in Rockbeat's on-line catalog, so....

The same thing occurred to me about the cover--that it may have been altered at the last minute. But the dancers seem too conveniently posed, almost as if they're leaning toward the center. It almost makes it seem as if they're being sucked up into the giant wig. Anyway, given the weird positioning, I figured that it's simply a very poorly conceived jacket.

Hello Lee
i have to say its my first time on your blog and its ruddy superb ,i love the fake sixties tunes ,as i remember picking a few up in liverpool ,bringing back a lot of memory,as a 12 year old,going to the woolworths and Rumbelows stores buying such records.
keep up with the superb work :)
Davey

Thanks for your kind comments! Was the Embassy label still in operation when you were buying fake hits? Or are you from the "Top of the Pops" and Music for Pleasure era? I was stationed in Scotland for three years (1978-81), and I bought some budget LPs from Woolworth's (called "Woolies" by the locals), but not any fake-hit efforts. If I had it to do over again, I'd have tracked down every budget copycat record I could find. I have four or five fakes on the Avenue label, including Elton John's superb cover of the Beach Boys ("Cottonfields"), which I acquired post-Navy, back before the postal rates went sky-high. Anyway, more fakes on the way! So stay tuned....

all three of the above lee ,we had quite a lot of second hand record shops around liverpool at the time so the above mentioned would appear on a regular basis ,i do remember a good mate called alan at the time who i have lost contact with over the years buying these types of records for years going second hand record stalls all over the country as he was a lorry driver and sometimes coming back with stackfuls of them ,english american and i remember a few german ones he picked up wich he was very proud of ,all singles and a few lps mostly all beatles and gerry and the pacemakers covers as well ,real happy times indeed they were :)
davey

I love all the stories in these comments! Between Davey and Lee himself, I can envision worldwide thrifting through the decades, by traveling sailors and truck drivers. That is so cool! Thanks, guys.