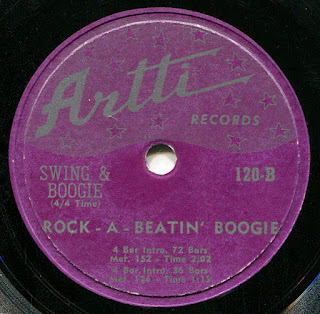 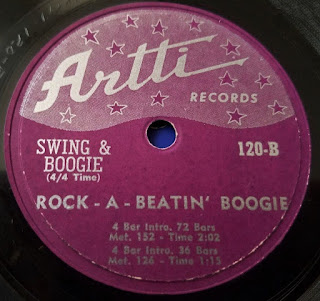 There's no justice in this world.  The top image is my scan of Artti Records 120 (Rock-a-Beatin' Boogie for tap dancing class--what else?).  The bottom image is the slightly out of focus digital image featured in the eBay ad.  Notice how it looks twenty times better than the scan, possibly because the light is hitting the label from an angle, not head-on.  The difference is astonishing, really.  Remind me why scanners were invented?

I swear that a good 15 to 20 percent of my scanned record labels come out looking like a shadowy blob, forcing me to change the color curve, which typically results in too much contrast and a grainy look to otherwise smooth paper.  Instead of documenting history, I'm distorting it.  But this is a tap dancing 78, so I need to calm down, read a book, meditate, drink a beer, pet a cat, recite the Serenity Prayer, take deep breaths, listen to some Jim Florentine prank phone calls, and just generally chill.  I can do it--but only if I don't think about it too hard first.  Darn.  Too late.

Rock-a-beatin' Boogie was a big hit for Bill Haley in 1955.  Other artists had recorded it previously, starting with the Esquire Boys (with Danny Cedrone) in 1952.

I have no idea what's up with "Artti."  Maybe it's a cute misspelling of "Arty," which would be a weird word choice, since arty means "showily or pretentiously artistic" (Merriam-Webster).  Or maybe it's Finnish, Artti being a Finnish variant form of the name Arttu.  Found that out on Google.  The truth is, I have no idea.  The parent label for Artti was Velmo, which also gave us Abor and Dookie.  Abor is the name of certain hill tribes in the Assam Valley.  As an acronym, it can mean Accounting Book of Record (not to be confused with Investment Book of Record, or IBOR).  Among other things, "dookie" is slang for excrement.  (I suspected something along that line.)  Not something you want to smoke, obviously.

Urban Dictionary defines velmo as "The end result of two adult males kissing so affectionately that their mustaches become intertwined with one another."  (I get it--"Velcro" shortened and combined with, er... never mind.)  Meanwhile, Velmo USA, LLC is "a provider of comprehensive product sourcing solutions."  Boy, the information superhighway is sure earning its name today.

A lot of dance class records have survived the ravages of classroom record players, it seems--enough, probably, to make possible a blog devoted to these things.  But don't look at me.  I'm too busy Googling "dookie."

There's certainly an art to scanning things versus photographing them. I'm not very good at it myself, and often bemoan the poor images I get. I wish I were better at Photoshop so I could correct all the things that come out wrong, but it's all trial and error. Maybe someone offers a class in record cover imaging and restoration? Inkydog! I should ask him.

All I know is scanning works poorly for those labels which (by accident or design) require side lighting to bring out the raised text. At my level of experience, I should note. Doesn't mean there isn't a way. Yes, a tutorial would be great.

What always happens to me is that, once I have a label properly side-lit with my desk lamp, my camera captures a big light reflection in the groove. Re- positioning the camera only ruins the color balance. And then I say, "Gee Willikers! Son of a gun! Jiminy Christmas! Rats! Darn!"

Both Artti and Arttu are Finnish variants of Arthur, and Artti also exists as a surname in Finland, although it is rare. Velmo too sounds exactly as if it could be a Finnish surname, but apparently it isn't one. But it could be a shortened version of Vellamo, the goddess of water, lakes and seas in Finnish pagan mythology.

Dookie, by the way, is an Indian surname, and incredibly, the only reason why I know this is because there's a connection to music and Finland: a blues/soul singer named Gyan Dookie has been active here since the '80s.

A million thanks for this information! I also see from the Wiktionary that "dookie" is Scots for a Baptist. "Dook" is a version of the British "duck," which means to dunk. These things only get weirder the more we investigate them....