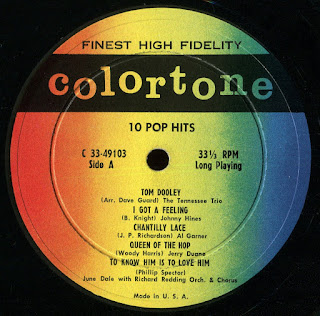 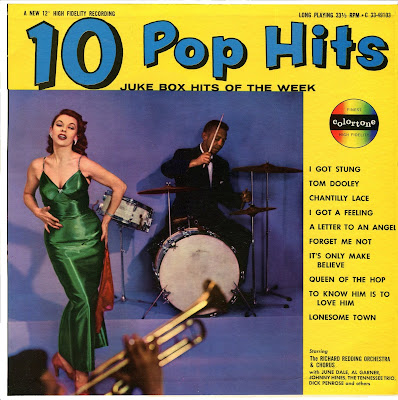 And we're back with another Pop Hits LP from the Waldorf family of labels--Colortone, this time.  The year seems to be the same (1958) as last post.  There's a less colorful (and less campy) cover, and some surprisingly bad vocalizing in spots.  Was Enoch losing his touch?  (I was going to type "his Light touch," but that's lame.)

"Juke Box Hits of the Week" this time, "starring" the Richard Redding Orchestra and Chorus.  On the label, the tracks get individual credits (so we know who to blame on this go-round).  One of the guilty parties, and a budget label regular, is Jerry Duane, who turns out to have had a very significant career.  (Hope you don't get the "SUBSCRIBE NOW" box.)

Jerry sang in vocal groups--with Stan Kenton, and behind Johnny Ray, Rosemary Clooney, Tony Bennett, and other Columbia vocalists.  Plus, he was the whistler on the Andy Griffith Show theme!

Correction (cue the red font): As Ernie notes in the comments, the Andy Griffith Theme whistler was actually the composer of same, Earle (Harlem Nocturne) Hagen.  Until and if someone can prove otherwise, that is.  In fact, I already knew it was Hagen, so apologies for my brain fart.  It's possible Duane remembered it otherwise, but he must have been mistaken.  The multiple claims, which include Fred Lowery and "Toots" Thielemans, are entertaining but most likely part of a made-up mystery.

Ahem.  Anyway, so why does Jerry sound so awful as one half of the duet on Forget Me Not?  It's not just that the Kalin Brothers original is significantly better, it's that Duane and Jack Brown sound like a drunken Homer and Jethro.  Were they cutting up?  Anyway, Duane is better on Queen of the Hop, though his singing is still nothing special.  Being a good whistler and part-singer doesn't necessarily make someone a good soloist, I reckon.  Take the Lettermen--amazing blend (even if augmented on certain tracks), unmemorable lead vocals.

In this playlist, we get high-quality covers of the Kingston Trio's Tom Dooley, Elvis' I Got Stung, and Ricky Nelson's Lonesome Town.  And lousy covers of The Teddy Bears' To Know Him Is to Love Him, The Big Bopper's Chantilly Lace (how could anyone make such a thing worse?), Ricky Nelson's I Got a Feeling (no pitch correction software in 1958, please remember), and Jimmy Clanton's A Letter to an Angel (I wonder if the songwriter had ever heard Pledging My Love?).  For all its faults, though, this collection is fun--and, by dollar-bin standards, pretty good.

Ummm, most sources credit Earle Hagen with whistling the Andy Griffith song, The Fishin' Hole. He was also the writer, if memory serves. Not sure who this guy Duane is...

I have to say Mr. Hartsfeld I sure do love these for some odd reason. Perhaps it is because I have heard these songs in their original format probably tens of thousands of times or maybe because I am a fan of obscure things.......

Thank you for your excellent aural treatment of these as they sound amazing!!!!!!

The woman on the cover is presumably swaying to the sultry rhythms of "Tom Dooley."

I was going by a couple pieces on Duane, including the obit I linked to. Yikes--seems there's long-standing disagreement in regard to who whistled the theme, despite Hagen's own claim that he was the one (which should settle it, but that's no fun). Some insist Fred Lowery was the whistler, and "Toots" Thielemans is also named. Good Lord--I think I want to stay out of the debate! I know nosink!

Checked Snopes, and no background on the theme--someone lists it as an earworm, someone else notes that it's one of many instrumental TV themes that actually have words. But no word on who whistled it--probably because there's no real vs. fake aspect to the issue. Could be a created controversy.

Did I mention I'm just an innocent by-surfer?

Scott, Thanks for the nice words! I love these fake versions, too, and there's no explaining it. A lot of people find the hobby very strange, and they may be right! (-: And I do work a lot on the sound--I have to, since these discs are both cheap and mistreated, as a rule. I de-click these pretty obsessively, and for this disc I used the left channel only, since most of the distortion (including sibilance) was in the r. channel. Mono doesn't care which side of the groove is chosen.

Buster--Ha! No doubt she is. And, yup, good ol' Loren. A 1948 Billboard magazine reviews a live Enoch Light concert--vocalist: "boy-singer" Loren Becker. The review is written in Billboard-ese, which is fun, but which makes me all the more fond of English.

And,Buster...she's singing Tom Dooley all the while in a sort of Jessica Rabbit/Lauren Bacall breathy, hoarse voice...with a voice-over by Artie Malvin.

I love the obscure stuff, too, and this is just dandy as far as I'm concerned. I mean, To Know Him is to Love Him followed by I Got Stung - magnifico. Thanks, Lee!

I'm inclined to vote against Fred Lowery. I have no doubt that he went around performing this song and every other whistle-centric song, but I'm not aware that he ever wrote anything, much less a Hollywood track like this. I get a feeling people assign the whistling to any whistler they know, and/or their mother.

Now there may be other versions floating around, and somebody else may have whistled those, but Earle Hagen is the guy credited on the soundtrack to the show...

Clearly, it's a conspiracy! (Smile face)

Yes, I go with Hagen, too. The burden of proof is on the non-Hagen claims.

And thanks--you reminded me to correct the post. Kind of a fun mystery, even if manufactured.