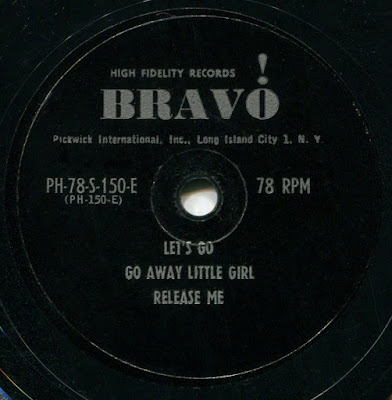 This record was overpriced and on eBay.  (Coincidence?)  But I knew I needed to have it--I'm a fake-hits addict.  In other words, nuts.  As a rule, I spend as little as I can manage (short of stealing), but for this I was willing to part with more dough than it's worth--and it wasn't that overpriced by the standards of the venue.  eBay is where many a dealer grabs a Fair-minus-condition Goodwill LP and puts it up for $49 or more.  If you think I'm kidding, go record hunting on eBay.  Have smelling salts on hand.

In fact, I could make a case that, given the almost nonexistent general demand for hyper-obscure items like this, the value here is about forty-nine cents, practically speaking, and you're lucky to get that.  But convincing the dealer?  Right.  So I paid the bread.  Deed done.

Humorously (ha, ha!), this was graded at VG, which it is hardly.  When the tonearm jumps all through the first track (Let's Go), it's maybe G+, but be aware that the dealer in question rates his or her records on (not by) "visual qualities"--managing, in this case, to miss seeing the considerable groove wear I spotted on first sight.  Luckily, in addition to magic eyes, I have styli and software ready to deal with massacred tracks, as long as they aren't Let's Go.  I'm kind of complaining, but not really, because I wouldn't miss having this kooky artifact in my grubby paws.  Or spinning on my turntable, even.

Why is this so special?  Because it's a vinyl 78 from 1962!  I didn't know 1962 78s happened in the U.S., but obviously they did.  What compelled Bravo! (Pickwick) to put out such a thing is the mystery of the week, but they must have figured some of their buyers lacked access to 45 rpm playback, when they could have been pondering why anyone was buying their stuff in any format.  (I should talk, after spending good money for this.  But I'm a collector, so it's okay.)

Anyway, by 1962, Pickwick was pretty much in charge of the fake-hits field, though of course not exclusively (SPC, for one, was still in the biz, appearing under any number of label names), but putting them on 78s?  No way.  But way.  We have the proof before us.  Plus my word.

Tried three styli before concluding that a conical LP needle worked best (you never know).  The tracks, minus the obliterated Let's Go, and the folks who actually got them on the charts:

Go Away Little Girl (Carole King)--original by Steve Lawrence.
Release Me--original by "Little Esther" Phillips.
Keep Your Hands off My Baby (Carole again)--orig. by Little Eva (Beatles, 1963, for radio.)
You Are My Sunshine--orig. Ray Charles.
Zip-a-Dee-Doo-Dah--orig.  Bob B. Soxx and the Blue Jeans.  (Rated S for Stupid.)

Save for the backing vocals on Release Me, all very fine cheapies.

Posted by Lee Hartsfeld at 8:14 PM

I've never seen a commercial U.S. 78 from such a late date. I have a private pressing of a church choir on 78 that I think is from the same era, but I have no way of knowing for sure.

I can believe private issues--also, home recordings when the owners still had a 78 cutter. But, yeah, commercial releases? I love having impossible artifacts!

There's another one of these at eBay (same dealer, different tracks), so there could have been a series, one that sold in sufficiently low numbers that few survive. My only guess. But what this late in the game??

I mean, why this late in the game? Was this intended for another country? If so, it would have been pressed there, I'd think.

Pardon me while I overthink this.

My guess would be that the inexpensive labels thought there was a market for people who didn't have enough money to switch to 45s and LPs. But 1962 is more than a decade into the era of the later formats.

I know. It's bugging me!

That taps into my theory (probably not original) that the reason so many cheap labels flourished in the early LP era is that hoards of buyers couldn't figure out what an LP is--after all, 10-inch LPs are the same size as 78s, so why pay more for them? I base this on my experience as a kid buying records at Salvation Army. The old ladies at the checkout (every lady is old when you're a kid) priced things according to big, middle, and little. No mention of speed. I once tried to explain to a cashier that the 12" Chopin Prelude 78s (Blue Columbia) shouldn't cost as much as LPs, because the playing time was much shorter. She just repeated the price scheme. So I had to pay a whole quarter each. Highway robbery.

Back to my theory, the cheap prices of Royale, Parade, whoever, were intended to match 78 rpm prices so that buyers wouldn't feel they were paying extra for an LP. Then again, wouldn't buyers have quickly discovered that LPs contain much more material?

Just shot down my own theory. Hate it when that happens!

Getting more for the same price is surely one motivation. For those with new LP players, being able to build up a library cheaply was another.

I remember my grandparents had a selection of budget LPs, some of which were far afield from their own tastes. One was a compilation that included Speedo by the Cadillacs. Not their thing, but I liked it. I think they bought anything that was marked down to 57 cents.

My grandparents had Royale, Varsity, and similar labels, too. Small world. I was puzzled by those things, wondering where they fit in the scheme of things.

My parents were strictly jazz and Classical, but my Dad seemed nonetheless oriented toward the discount bin, probably because record prices had risen since the days of their beloved Verve LPs. I remember when my grandfather sang the praises of Tom Jones and Tony Orlando and Dawn (please, please, kill the memory! Not Tom, of course). My Dad just shook his head.

I remember my brother and I buying a number of marked-down Beach Boys LPs during that group's period of no-longer-relevance. All in that awful Capitol stereo, of course. And then I got a discounted "Surf's Up" and couldn't process it as a B. Boys LP. My ultimate sin--not thinking much of "Good Vibrations" when it came out. Mediocre stuff, I thought. An even worse sin is that I still consider it sub-par, though I've come to like "Wild Honey," which at first I considered a prelude to the end of the world.

If you've still got the equipment, use it! I can't imagine they sold many of them, but the costs to make 'em had to be super low.