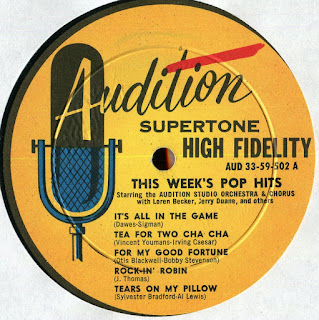 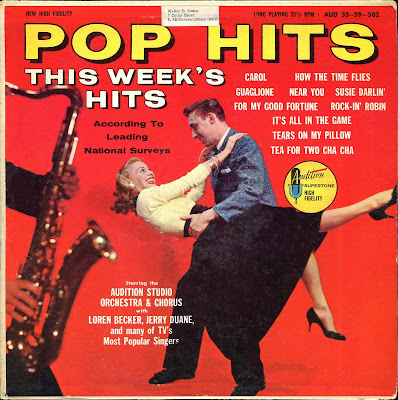 Audition was part of the Grand Award Records family of labels, which included Waldorf Music Hall, Colortone, 18 Top Hits, and other, um, winners.  Actually, the fake hits on these labels were pretty decent, with some amazing musicianship at times (Tea for Two Cha Cha and Guaglione, for instance).  After all, Enoch Light ran the show.  The productions are much better than the dollar-bin LP norm.

I don't recall hearing any absolute duds from this budget label group, which is more than I can say for outfits like Tops, Prom, and the Record Corp. of America (not the RCA, of course), for whom botched takes were no rarity.  Enoch Light apparently considered lost keys, ruined intros, and off-key singing cause for extra takes--the result: cheap-label fake hits with heart.  That's what I'm talking about.

Some excellent fidelity, too, despite my copy's fairly worn grooves.  (The type that look great in low light, not so great in good light.)  I imagine most collectors would grab this for the cover--and who could blame them?--but the vinyl is nothing to pitch, either, despite the stereotype that these things are a thrifter's nightmare.  Not to me, certainly.

Pop Hits--This Week's Hits, According to Leading National Surveys, Starring the Audition Studio Orchestra and Chorus, with Loren Becker, Jerry Duane, and many of TV's Most Popular Singers (Audition 33-59-502, 1958).

Posted by Lee Hartsfeld at 5:44 PM

Maybe it's my imagination, but does Loren Becker appear on more of these budget LPs than any other singer? Or is it Artie Malvin?

Ha! Well, my personal guess would be Artie, but it's jut a guess. You probably know that he sang with Glenn Miller before, um, graduating to cheap label stardom. The Artie Malvin Singers recorded with Jimmy Dorsey on the bandleader's last (Fraternity) singles and showed up on Jackie Gleason's "Oooo" LP (same year--1957). My brain refuses to store useful information, but it saves this kind of data!

I did know that about Artie (I even think that he was called Art at one point), but I don't ever remember seeing Loren's name on anything but cheapo productions.

Same here--thought Wikipedia says Becker headed Evolution Records, a subsidiary of the Longines Symphonette Society. I wonder if that was the label for Lighthouse? (Yes! Just checked Discogs.)

Some of the Longines hits-of-the-year LPs of the '60s weren't half bad, but I'm always afraid I'll be carted off to the looney bin for expressing as much.

My guilty pleasure is German covers of US hits of the 50s - there is a long series of Polydor LPs with these gems. You have probably seen them.

Actually, I haven't seen the LPs, but I once had a Polydor (?) 78 rpm cover of Red Ingle's "Cigarettes, Whiskey..." Really surreal--in German, with the requisite exaggerated Hillbilly twang. I should have kept it, but I never anticipated either the internet or blogging. You never know what you might never again encounter.

I need to find some of those LPs!

I think I used "requisite" incorrectly. I worry about stuff like that, even in the internet age....

Obligatory might be the requisite word you're looking for... :) My brain works the same way in sorting and disseminating information, those things you really want to keep stashed in the corners of your brain for daily use seem to hide pretty well.

And many of TV's most popular singers could mean a lot of things, but the singer's talent and sound and style are more important than a name you know. Enoch light is all you need to know. Thanks, Lee!

My pleasure. And I have another Enoch Light special coming up (on the Colortone label this time--another front for Grand Award, of course).

On the Colortone LP coming up, some of the singing is sub-par, so I may have to revise my quality claim for Enoch Light productions. One of the poorly sung tracks features Jerry Duane, who I Googled, not expecting much--and he turns out to have been a very significant person. Sang for Stan Kenton, behind Johnny Ray, Tony Bennett, and other Columbia singers, and did the whistling on the Andy Griffith theme! He's half of the duet covering the Kalin Twins' "Forget Me Not" on the Colortone album,l and the two sound like a drunken Homer and Jethro.