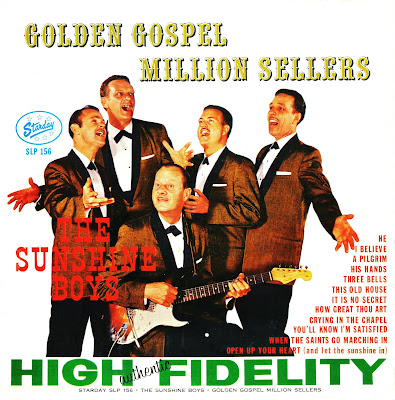 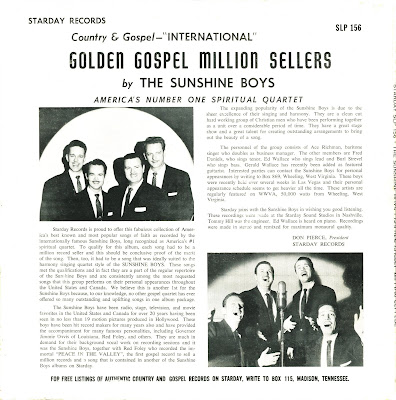 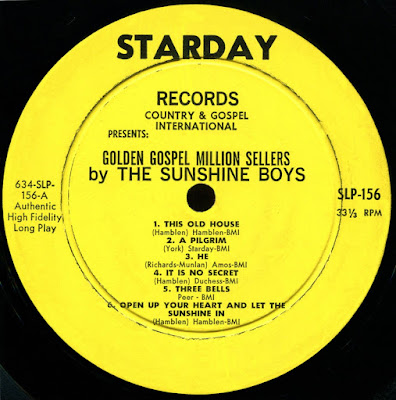 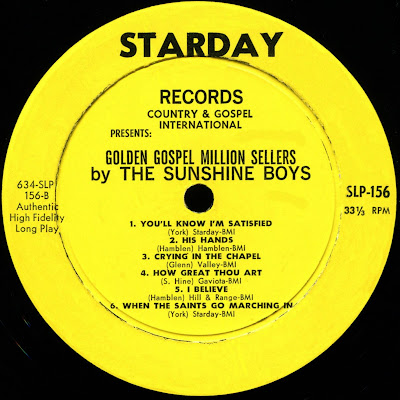 Checking up on this LP's song titles and composer credits, I plugged "You'll Know I'm Satisfied" (in quotes) and "York" into the Google search box--no results found.  Why no results?  Maybe it's because the song is actually Martha Carson's self-penned 1951 hit Satisfied.  Tsk, tsk.  Shame on Starday.

Also, Stuart Hamblen did not write I Believe--Ervin Drake, Irvin Graham, Jimmy Shirl, and Al Stillman did, however.  So, some careless packaging here--but very nice music.

Er, wait a minute.  Actually, yes it did--on the back cover and the labels.  There it is: Golden Gospel Million Sellers by the Sunshine Boys.  Tsk, tsk.  Shame on you twice, Starday.

But the tracks are excellent, and Starday put out a lot of terrific gospel, so I guess we have to forgive.  And the Sunshine Boys were on a million-selling disc--Red Foley's 1951 Peace in the Valley, though that title isn't on this disc.  Anyway, J.D. Sumner sang with this group prior to joining the Blackwood Brothers in 1954, and here's a picture of Elvis and the Sunshine Boys, from 1957: 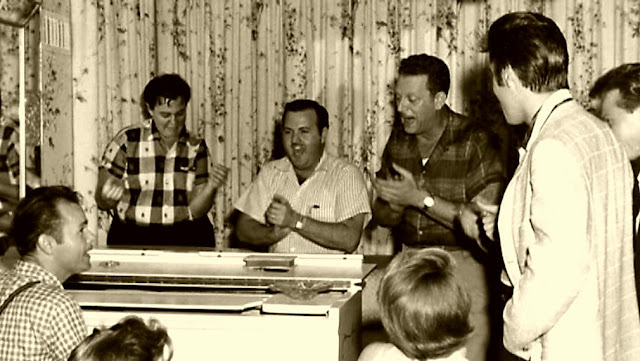 Looks like Sumner's in the photo--not sure.  Elvis first heard Sumner when Sumner was singing with these guys, except Sumner must have been performing on a guest basis, since it was post-1954.  I'm tossing this essay together in a hurry (still labeling the MAGIX tracks), so I can't verify everything, but my gospel-knowledgeable readers will step in, I'm sure.  On that note, let me thank Josh for the This Ole House history he shared in the comment section.  And guess what song starts this playlist?  This Ole House, of course--only under its alternate title, This Old House.  Nothing to do with the PBS series, far as I know, and I'm surprised to see that it's still on.  Shows you how often I tune in PBS.

A number of these tracks fall into the "inspirational" category--His Hands, It Is No Secret, Three Bells, He, I Believe, Open Up Your Heart, and Crying in the Chapel.  That's almost the entire album, actually.  Anyway, were the Sunshine boys a group "long recognized as America's #1 spiritual quartet," as the liner notes claim?  Since it's Starday making the claim, I wouldn't bet the farm on it, but the group clearly had a notable gospel career.  Here's a write-up on the singers which I found slightly unclear in spots, but helpful nonetheless.  As for the "Light Crust Doughboys" portion of their history, they were obviously not the famous Western swing group by that name.  Unless the Light Crust Doughboys had satellite bands, a la Paul Whiteman.  As in, different groups operating under the name in different locations.  Dunno.

The second and last titles are of unknown authorship.  Or "folk," as the term is sometimes used (to mean "We don't know").  The second (A Pilgrim) has been recorded by any number of people, including the Byrds in 1968 (as I'm a Pilgrim).

This Old House (Stuart Hamblen)
A Pilgrim
He (Richards-Munlan)
It Is No Secret (Hamblen)
Three Bells (Peer)
Open Up Your Heart And Let the Sunshine In (Hamblen)
You'll Know I'm Satisfied (York)  {Actually, Satisfied, by Martha Carson)}
His Hands (Hamblen)
Crying in the Chapel (Glenn)
How Great Thou Art (Carl Boberg--Stuart Hine)
I Believe (Drake-Graham-Shirl-Stillman)
When the Saints Go Marching In