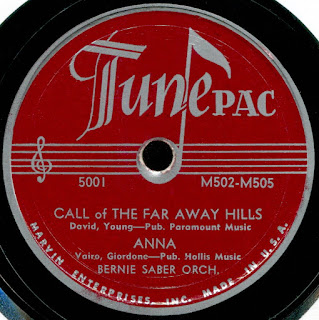 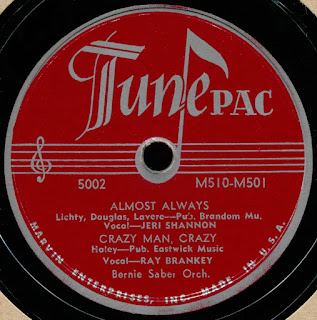 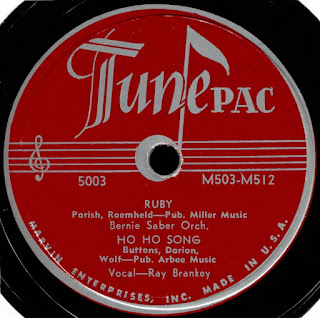 Since time began, humankind has been haunted by this question: Is it Tune PAC, or TunePAC?  Or, perhaps, Tunepac?  Who knows?  I'll go with TunePAC, because it looks cooler in print than the alternatives.  And today we'll be hearing three 78 rpm EPs (12 tracks in all) from this low-low-low-budget label, all featuring 1953 hits--so I guess we can assume these discs are from that year.  I vaguely remember finding an image, probably on eBay, which showed a mail-order packet for a TunePAC set--kiddie material, if I recall correctly--but darned if I can find that image, assuming I saved it.  Anyway, TunePAC certainly looks like a mail-order rip-off, er, operation.

There were at least three other labels in this group--RecordPAK (or Record PAK, or Record Pak), the  imaginatively named Folk Music (featuing country), and Irene.  (In fact, Discogs lists Record Pak--with a space--as a sub-label of Irene.)  RecordPAK's label design sported the same five-line music staff as TunePAC, but no treble clef, and the eighth note was tilted to the left.  Folk Music had the staff, and an upside down eighth note.  Irene had eighth notes but no staff.  Unlike TunePAC, neither RecordPak, Irene, nor Folk Music featured "Marvin Enterprises, Inc. Made in U.S.A." on their label bottoms, but they're clearly the same guys.  There'll be a test at the end of the post, so pay attention.

TunePAC, RecordPAK, Irene, and Folk Music didn't last very long, far as I can tell, which puts them in the company of such other fly-by-night 1950s sound-alikes as Music Masters and the Record-o-Mail labels, which included Victory and Popular.  JEB and Owl (yes, Owl) are two other labels which might have been in the TunePAC label group, but I don't know.  I have a headache from writing about this stuff, so I'm in no shape to haul out my Owl and JEB records and look for label clues.

I do know that TunePAC's orchestra leader, Bernie Saber, was the co-author of Good Things from the Garden, which we older folks know as the Jolly Green Giant song.  Or song portion, more accurately.

I regret to note that the TunePAC version of Crazy Man, Crazy (I never understood the punctuation choice in that title) mimics the Ralph Marterie cover, not the Bill Haley original.  Quite a missed opportunity, but a cool relic, regardless.

And I'm very proud of myself for not once accidentally typing "Bernie Saber" as "Bernie Sanders."  I listed Saber on all the tracks, even though his full orchestra is absent from at least two.  The labels' track credits aren't completely clear (imagine that), so I figured what the heck.

The astonishingly stupid Ho Ho Song, which closes this set, has always been my choice as the least funny comedy disc ever waxed (though Mouth & MacNeal's How Do You Do comes really, really close).  There is comedy, however, in listening to the RecordPAC background people trying to mimic the live audience laughter of the Red Buttons original.

BY THE WAY: I think it's worth noting, and noticing, that real talent was present on this label and the others in the group.  Good singing, good musicianship, and a big-name wannabe (Bernie Saber).  Had the group opted to take a legit path, instead of the market-parasite path favored by junk labels, it might have accomplished something.  It would have at least gone down with honor.  This is off the top of my head, but I think Don Belloc was involved in this group, too.  The standard junk label model was almost a type of market suicide--rushing out the offerings, creating a host of sub-labels (to appear bigger than you are), and hoping people will go for the cheap price.  And never mind that a hundred other outfits are offering the same deal.  Such labels had little to offer, were operating on a five-cent budget, yet they had to put all of what little they had on the table right away.  The odds of not going down in flames were slim to none.

Posted by Lee Hartsfeld at 9:50 AM

So you're saying that Bernie Sanders wrote the Jolly Green Giant song?

Weird stuff. Don't think I've seen anything on this label before.

He wanted to create the antithesis of himself--big and jolly.

It doesn't pop up a lot. And because it's not clear whether its "Tunepac" or "Tune pac," it's hard to find in a search. I only know about this label because, years ago, I was doing an eBay search for "Crazy Man, Crazy," and up popped Bernie Saber and TunePAC.

So, how many record labels have there been? Any clue?

Do you mean in this group? Or in general?

It's TunaPac. It was a promo recording from Charlie the Tuna before he jumped ship and went over to that other tuna packer.

And it is a little weird but entertaining to me, it's all very cool. Of course I used to shop at the same Kroger's here as Jesco White every week, and I became a pretty good judge of weird. Ever see someone dressed head to toe in camo clothing that's been ironed and starched with perfect pleats and creases, and camo bandannas and socks to match?

First reading, I missed your pun--"Tunapac"! Excellent! Good thing I reread it....

I had to look up Jesco White! I'm not in touch with current pop culture (I try not to be, anyway). I agree that these are cool, and I'm actually surprised that the tracks are so good, considering the rush job they must have been, and the zero budget they were made on. I may have overplayed the weirdness aspect. The labels are certainly bizarre, and any cover of the "Ho Ho Song" is going to be creepy, but the performances are mostly very professionally done covers, and I think it's a shame such talents were stuck doing this kind of thing. Not any way to get your foot in the music industry door. At least many of the singers on Prom, Bell, and whatnot were minor "names" from the big band era and thus had a chance to bounce back from their cheap-label stuff. What mystifies me is the cheap-label bit of hiding behind groups of sub-labels. It was done to make their operation look bigger, but it would not have had that effect on buyers--only industry types. It suggests something about the nature of the industry at that time--namely, that getting your product on the market involved, to some extent, selling it within the trade. Today, we just go on line and buy what we want, but there were layers of hurdles to be cleared in the past just to get a product in a rack.

:-/? I don't understand any of this at all. 'spect I'd better check it out. Thanks Lee.

Rehearsal wasn't a strong point of the Bernie Saber band, but the singers have things in hand. "Tell Us Where the Good Times Are" is sort like hearing Doris Day and Frankie Laine tackle this run-ti-tum thing. Brankey sounds more like Laine than Red Buttons in the Ho Ho Song, which I had mercifully forgotten for 65 years until you revived its awful memory. I did enjoy hearing "Ruby" - it's a favorite of mine.

Buster, My sincerest apologies for reviving the memory of the "Ho Ho Song." Now I feel like a terrible person! No one, as far as I know, has ever attempted to explain 1) why that was a hit and/or 2) what on earth is supposed to funny about it. I agree there's a Day/Laine feel to the other cover. I love the Guy Mitchell/Mindy Carson original. Not sure why--I've loved it since the first listen. And, after all these years (since first hearing it circa 1983), I can't place the opening phrases in the melody--they're lifted from something, but what? My comments about the good musicianship at this label will have to be amended a bit when I post stuff from the other labels in this group, because some of the group's other singers stunk. Somehow, they got Milt Hearth to play on a least one of their releases (a double release on JEB and Owl which, hilariously, says the material was exclusively licensed to the Owl label, which doesn't explain its appearance on the other one). The group goes back at least as far as 1951, so they stayed afloat a couple years, looks like. That seems about right. In a sea of cheapies, they wouldn't have stood out, save for their memorably tacky label designs.

And I accidentally hit the option to stop receiving comment notification emails, so I hope I succeeded in turning in back on. I'll see in a moment....

On "Tell Us Where the Good Times Are," I assume you mean the "Oh we just came in.." melody rather than the "One little, two little, three little Indians" riff that precedes it. It sounds familiar to me, too, but I dunno from whence it came.

I forgive you about the Ho Ho Song, except now I want a Ho-Ho.

I'm embarrassed to say that I did mean the "One little, two little" phrase. I only just now made the connection, just before coming upstairs to the Media Room and bringing up my email. I was hoping to get here in time to report that I'd finally placed it, but... too late! It may be that some melodies are TOO familiar. Like missing an answer because it's too obvious. (Maybe I can come up with a few more excuses....)

Good grief! All these years of thinking, "I know that melody. But what is it?"