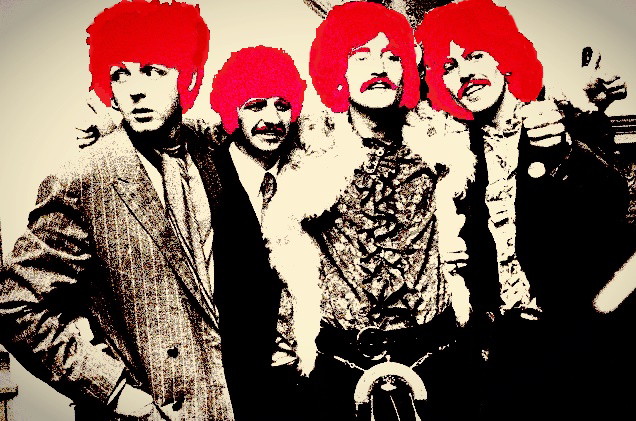 Well, I guess you can still tell it's them.  Anyway...

What can I say?  Some mind-blowing (and, at times, mind-blowingly bad) Beatles fakes, with some of the tracks belonging in the semi-fake or almost-fake category.  Peter Knight, for instance, was a highly legit musician and had every right to release an instrumental LP of Sgt. Pepper's, but, as well done as it may be, it's pure exploitation--a cash-in effort, however competent.  And how can I not post Pops-style versions of Lucy in the Sky and A Day in the Life?  They cry out to be included.  And Terry Baxter's record club (Columbia) material are fake versions in the get-the-Beatles-at-a-reduced-price tradition, and their expert presentation makes them all the more hilarious.  As for the Electric Scoundrals/Scoundrels (they're spelled both ways on the Premier label release), they're a cover name (like you wouldn't have guessed) for a cobbled-together collection of fakes spanning the years 1960 to 1969.  And their version of Hey Jude (recorded in something approximating stereo), is easily the worst I've ever heard, but I love it, anyway!  The Candy-Rock Generation is another Columbia Record Club--er, Columbia Musical Treasures--outfit providing the hits to people who want them fake and inexpensive.  Same ol' story.  And the Free Spirits, Sound Effects, and Northern Lights were all made-up groups working for QMO Records, the company behind many later fakes.  I wonder how many times I've typed "fake" and "fakes" in this paragraph?

I have a warm spot in my heart for the gorgeous (and hopelessly pretentious!) Longines Symphonette versions of the Fab Four--we get two: Lady Madonna and Hello, Goodbye--and pity the person who arrives in the middle of either arrangement and tries to guess the tunes.  And we get some solo and post-Beatles material--#9 Dream, Another Day, Instant Karma, and an especially dreadful Uncle Albert/Admiral Halsey.  I don't know how anyone could possibly take the fun out of the finale to that last number, but The Sound Effects found a way.  You get what you don't pay for, I reckon.

Posted by Lee Hartsfeld at 6:13 PM

Terry Baxter doing "Carry that Weight"? Richard Alden doing "Honey Pie"? They can't be worse than the originals, can they?

Hey, Barbra Streisand thought "Honey Pie" was worth doing! It's not much of a song, I'll admit, but it evokes the era nicely--better than "When I'm 64," I think. I seem to remember (probably incorrectly) that the so-called White Album was meant to be stylistically diverse, which may explain McCartney dashing off a faux 20s number for it. Of course, the LP ended up sort of a mess, with everyone going his own way. Sorry--the Beatles and Beach Boys are "my" two rock groups. I can go about them forever. But nothing is more boring than fan praise.

By the way, appreciate the input! All I can ask for is honesty. And I'm a guy who hates most Boomer rock, so....

I love the early and mid-period Beatles, but the later stuff is variable. I also love the Beach Boys - well, until Surf's Up, that is. Also, Pet Sounds is widly overrated.

Sorry to be a heretic!

No problem! And I'm happy to know someone who agrees that Pet Sounds is wildly overrated. Even at the time, "Wouldn't It Be Nice" was a letdown, and I didn't see anything special about "Good Vibrations." Still don't. I think "Wild Honey" convinced me the quality days were over for the BB.

GV, of course, was released on the "Wild Honey" LP. Which I never heard until much later, and I couldn't believe how AWFUL it was.

And how could Brian Wilson have made such an inept tape splice in "Heroes and Villains"? Was he doped?

Wow, things just get better and better, don't they?....or worse and worse, depending on your point of view. I can't wait to hear these, tho' I doubt I'll be chucking my Beatles albums anytime soon. I'll just consider these super obscure underground bootlegs of long rumored outtakes. Agreed, fanboyism is something to be avoided. I was never bitten by the Beach Boy bug, but the Fabs struck me straight away. Perhaps if you post some faux Beach Boy tracks I'll see the error of my ways. In any case, much appreciated Lee. Your abilty to transfer these often losey pressing and make them listenable continues at amaze.

Honey Pie is my favorite song from my second least favorite Beatles album (one up from Let It Be), my second favorite is Helter Skelter so it has nothing to do with style of music. I learned to play guitar in the late sixties by obtaining a Lennon and McCartney song book and learning to play every song. I soon discovered the arrangements in the book didn't line up very well with the recordings. Should have been called a fake book, because that's what it was.

In the day I would have considered these faux tracks to be sacrilegious, but since then Jesus straightened me out, so now their just funny. Thanks for the laugh.

I love Heroes And Villains! That's probably my favorite BB track. And it seems to have such a tortured history, I doubt if Brian Wilson had much to do with the released version. That was around the period where he was really losing his grip on reality.

Rev. b and Larry,


Thanks for the nice words, and glad to discover another "Honey Pie" fan! (That sounds weird, for some reason.)

True. That was Brian's post-"Smile" flip-out, and someone probably butchered the tune into a single. I like it, too, though that terrible edit drives me nuts.