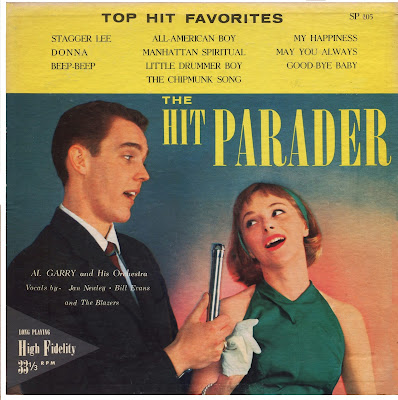 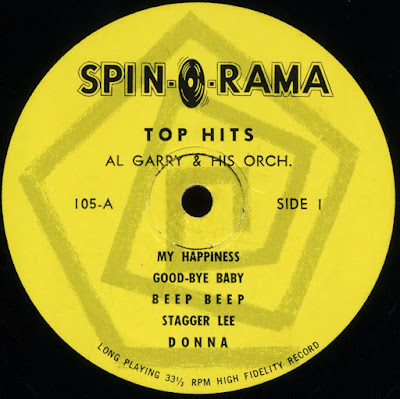 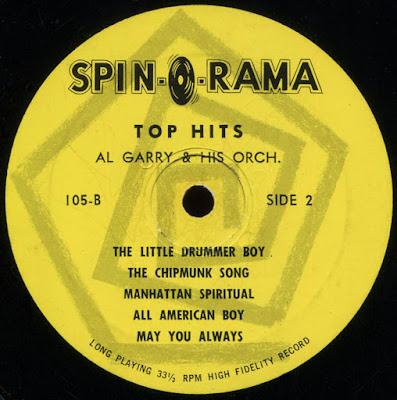 We'll be hearing ten "Top Hit Favorites" from The Hit Parader.  Or, if you prefer the label title, from Top Hits.  Spin-O-Rama couldn't make up its mind, I guess.  The blame for these tracks (actually, they're pretty good) goes to Al Garry and His Orch.  Discogs lists Spin-O-Rama as one of the labels belonging to Premier Albums, Inc., but this is clearly SPC (Synthetic Plastics Co.), as revealed by the back-jacket logo, "Fine records needn't be expensive."  (Then why didn't SPC ever make any?)  I didn't scan the back jacket, as it's pretty marked up and not worth the photo-shopping hassle--it's just a list of other releases.

We've heard a number of these before, including Stagger Lee, Manhattan Spiritual, Good-Bye Baby, and My Happiness on the Plymouth (Canada) LP 8 Top Hits, but... here they are again.  And that LP failed to make the trek from my old hard drive to this new one, and the link has expired, so I'll have to re-rip it.  Meanwhile, we have this 12-incher from a recent Goodwill trip.  These are showing up less and less frequently at the thrifts, so I was thrilled to encounter this.  And what a weird cover.  Did the photographer tell the two models, "Okay, make weird faces"?

The Little Drummer Boy, that big Harry Simeone hit stolen from Katherine K. Davis' Carol of the Drum, is a little out of season, but this is an extremely good fake--so good, it doesn't even seem like a junk label effort.  The Chipmunk Song is very professionally done, too, which means that it's quite close to the original, which means that it's highly annoying.  All American Boy is a cut on rock and roll that became a rock and roll hit, which only goes to show... um....  I don't know.  That old-time rock and roll fans had a sense of humor, perhaps.

Meanwhile this Hit Records LP is back up and running: Current Hits, Vol. No. 11

Enjoy!  UPDATE: I neglected to mention the singers credited on the jacket: Jan Newley, Bill Evans, and the Blazers.  Or is it "Bill Evans and the Blazers"?  This is why the Oxford Comma is important.  Fake names, all, I'm sure (though there are people with those names, I'm sure.  In case there's a Jan Newley reading this....).

Posted by Lee Hartsfeld at 8:50 AM

Certainly a varied collection - although it says "Al Garry," I would imagine different people do "My Happiness" and "Stagger Lee."

I can't remember ever hearing Beep Beep before. Would it qualify as "stand up" pop? I can picture it being sung by Jerry Lewis.

Yeah, Al Garry is just a fake name. They used it for an earlier collection, too. One of their stock fake credits. Fake hits, fake credits. Nice symmetry, there!

"Beep Beep" was a huge hit for the Playmates in 1958. This is very close to their version. And it does have a Jerry Lewis feel--I can picture (or, rather, hear) him doing it. He did a similar car novelty which I used to have on 78. I should've kept it!

Isn't "Beep Beep" a sort of parody of such fare as "Maybelline" and "Hot Rod Race"?

I have the Playmates album (I'm hard core) and the trio of chubby gentlemen are depicted crowding onto a Vespa.

Yeah, I can see that. I wouldn't be surprised, too, if the song is using a folk motif--the small auto that catches up to the bigger, more powerful one. It has a folklore/poplore feel. It seems like a standard story type.

I had that LP at one point. I think that I've had about three times more LPs than I still have!

Hooray, Christmas music! Fa la la la, la la la la! I bet you can find those two tracks as a single somewhere. Then they didn't want to waste 'em so they put them on here to fill it out to a still-slim ten tracker.

I probably have that "Drummer Boy" take on a Promenade EP. It also showed up on the Record Corporation of America label, Ultraphonic, so it did the usual label-group-hopping. (Is that a term?) AND I have it in true stereo on a Tiara boxed set. Someday, I'll look back and say, "THIS is what I did with my life?"

I've been organizing my collection lately, causing me to ruminate on my own time and money expenditures over, oh, 50-60 years. Also giving me a nasty case of bronchitis from all the dust (hello, prednisone).

I do love records, though!

Sacrifices must be made. Speaking of bronchitis, I'm trying to stave off a third bout. My lungs want to go there, but I sure don't! Sorry to hear you're stuck with it. Prednisone is no fun! Though it beats wheezing....

Stuck with it at the moment, I mean. I, myself, am always afraid of ending up with the nonstop kind. I grew up with endless clouds of second-hand smoke. I don't recall my mother ever NOT smoking.

Delightfully second-rate stuff, nicely cleaned up and presented on a silver platter. I genuinely cannot tell you how much I have learned to like these fake hits. They truly do make my week when you post them.

The same holds true for your Gospel Sundays offerings. Gospel is not a genre I ordinarily listen to, but your scholarly selections coupled with the wonderful diversity and artistic merit of the recordings has legitimately reeled me in.

Thanks for the kind comments! I really appreciate them. I'll try to keep the good stuff coming.

i never paid close attention to the fake hits labels… certainly not close enough to realize that they sometimes included original material for whatever reason. but for decades now, i’ve been aware of a similar phenomenon with chinese appliances, toys, and other trinkets. i refer to those which contain a music track of some sort. that’s a natural feature for, say, a holiday toy… like an old D-battery santa. press a button and it might play a selection of the usual ditties. but along with the usual, as often as not, there would be one or two seasonal songs that even santa himself wouldn’t recognize, with titles like “snow is falling over the red sunset”. recently, i bought a small video magnifier which can do all kinds of things with any print you stick under it. but the chinese didn’t stop there. figuring that you might like some music along with your chosen reading material, they included a music mode that pours out an hour of classical hits through a speaker about the size of a fingernail. you get mozart, the three B’s, chopin, and someone whose name is in chinese characters and whose music is… to be charitable, fake classical.

over the years, i’ve owned alarm clocks, flashlights, toys, games, office equipment, kitchen appliances, objets d’art, and mysterious head-scratchers, all made in china, and all providing tinny music fit only for a flea circus. and along with the selection of well known hits would usually be a few imposters. i doubt if anyone was looking for fame and fortune with these, or even a few yen (not in the land that pays no royalties). rather, they’ve always struck me as a sort of message-in-a-bottle (or flashlight or alarm clock, as it were) by anonymous musicians who had no other way to reach the world; or perhaps by some jaded composer who had concluded “ok, you want to listen to mozart, then you must listen to me too”.

what i never considered until now is the idea that someone might collect these someday just as you have collected (and are polishing up for posterity) the fake hit labels. i can’t rightly say how rewarding such an endeavor might be. (i mean, i sure as hell ain’t gonna do it.) but for anyone reading this, the field is wide open.

My pal Bill Evans the professional banjo player once got a cease and desist order from jazz pianist Bill Evans's lawyers to stop appearing professionally as Bill Evans. I'm not kidding.

Jim is after my heart.

And I was right about Bill Evans--I thought that name was familiar. My parents had a jazz LP collection. His lawyers were that brazen? "Change your name because it's the same as our client's"?? Unreal!

I have vague memories of what the world was like before everything (and everyone) was branded.

Definitely not an area I want to tackle! The research required would be unreal. As for "fake fakes," as I call them, I'm only aware of the Hit Records/Modern Sound habit of sneaking in their own stuff; I don't know of other labels doing it, though that doesn't mean it wasn't happening. The tactic that came closest was the cheapest-of-the-cheap Pickwick label's charming habit of featuring two or three actual current hits, then stuffing the rest of the LP with filler. Come to think of it, Crown did the same thing, and often with only a single hit, so I guess Pickwick wasn't the cheapest of the cheap. Darn. I hate it when a label fails to live down to my non-expectations! Crown and Pickwick also put out pretend soundtrack LPs to exploit a popular movie or TV show, and those were primarily filler--stuff in their inventory that they retitled for the occasion. One of the funnest and most hilarious is that Design (Pickwick) "Mission: Impossible" LP I put up last year (and which I need to revive), which is packed with P.D. material retitled to pass as spy background. And I can't believe I just typed "spy background." These are the closest relatives I can think of to Hit Records' fake fakes.