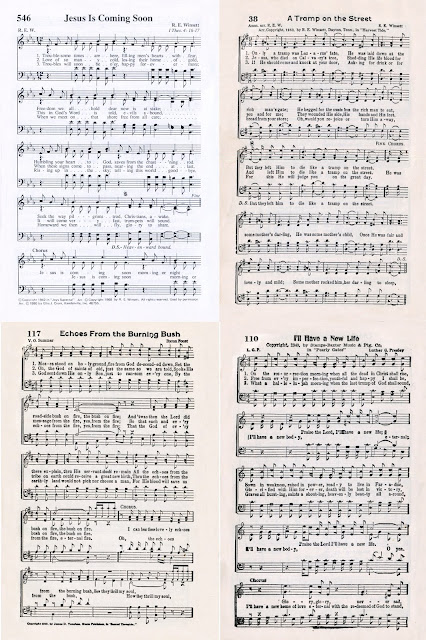 A number of bluegrass gospel standards today, plus one of the earliest best-selling gospel records, the Stamps Quartet's 1927 Give the World a Smile, which Wikipedia describes as "probably the first Southern gospel song to become a 'gold record.'"  Dwight M. Brock's ragtime-style piano on this track may come as a surprise to anyone who associates syncopated gospel piano with a later era--but it was an established thing even this early.  I know, because (to my astonishment at the time) I heard a similar piano backing for a vocal solo on a c.-1903 cylinder (a CD dub, to be precise).  Even the Stamps' note/chord trade-offs, with the staccato harmonies punctuating the melody line, is a tradition dating back at least as far as the 1880s, as proved by gospel songbooks of the late 19th century.  Sacred quartet singing, like Barbershop, is at least as old as sound recordings, but, while much Barbershop was recorded, gospel quartets didn't find their market until about the mid-1920s.  It's quite a shame, considering what could have been, but wasn't, recorded.  Same is true of the earliest country music--I'd give anything to hear a turn of the century outfit, though there were some barn dance imitations that found their way into early-1900s pop music.

The strange, scat-style singing at the end of the Stamps Quartet disc never caught on, I don't think, and it's kind of a jolt--but a quite cool one.  And we get to hear the Blackwood Brothers' outstanding 1959 recreation of this number, which the Blackwoods do at a much faster tempo.  Show-offs.

The country/bluegrass gospel standards in our playlist bring us a little closer to the present: four versions of Echoes from the Burning Bush (written in 1943), four versions of Jesus Is Coming Soon (written in 1942), and two rounds of I'll Have a New Life (written in 1940).  Tramp on the Street (two versions today) is another mandolin and fiddle standard, though it's from the period discussed above--the late 19th century, when it was known as Only a Tramp.  It's the ultimate social-gospel gospel number, and a genuinely brilliant work, its lyrical simplicity just one aspect of that brilliance.

I've always been fascinated by the old-fashioned sound of so many of the gospel numbers written during and just after the Depression.   They have the sound of music that has passed through many generations of rural folks miles removed from the nearest city of any size, yet they're actually professionally written numbers popularized on radio and records by major-label country and bluegrass acts, starting with groups like, of course, the Carter Family.  Also fascinating, and funny, is the number of "songs from the hills" that were actually written in the late 1800s and early 1900s in Northern states like Illinois, Pennsylvania, and New York.

Moving a little closer to the present, we have two numbers by the brilliant John W. Peterson--the marvelous gospel waltz numbers Jesus Is Coming Again (not to be confused with Soon), and Heaven Came Down and Glory Filled My Soul.  (Actually, these numbers are in 6/4 and 6/8, respectively, but I call them waltzes.)  Peterson was the Charles H. Gabriel of the latter 20th century--a musician with far greater formal training than Gabriel but the same genius for simple, unforgettable melodies.

And we get a second helping of Phillip H. Lord's 1930 classic You Go to Your Church, and I'll Go to Mine, performed this time by one-time radio and TV singer Joe Emerson, who injects great feeling into the already-moving words.  Heaven's Avenue was written by Mr. and Mrs. Frank Stamps.  Frank H. Stamps led this group, a new version of what had once been two separate Stamps quartets--one led by Frank, and the other by Virgil.  Now you know.

The 1928 Vaughan Quartet restoration (His Charming Love) is my own, whereas the two late-'20s Stamps sides are from an RCA Camden LP, whose fake stereo I managed to turn into decent mono.  The sound drop-outs on Carl Story's Tramp on the Street were on the LP.  Maybe the label was working from a damaged master tape.

Thanks as always - not the least for the fascinating commentary.

I do a lot of text revision! I keep about half of what I've typed, usually. I did some minor text tweaks right after I posted it, too.

I'm annoyed at Blogger, since I had this scheduled to go up this morning. But, in all probability, I did something wrong. But it's always more satisfying to outsource blame!

What wonderful treasures! Thank you so much. I'm particularly impressed with all the contrasting versions of Jesus is coming soon. Each one with virtues of its own. I remember singing this with the bluegrass group I mentioned before. Nice memory.

Echos from the Burning Bush is particularly nice. I don't remember having heard it before.

These are all keepers.

Yeah, when I pre-post things, I find that I sometimes get the AM/PM wrong, or occasionally the setting won't even take, and it just posts right away. It's easy to screw up. But there are worse things that can happen. :)

Larry--So glad I got it right. Yes, "Echoes" is fascinating, and it's something I'd have expected to originate in, say, 1906, not during the "Buy War Bonds" era! I wonder if, about that time (with all the folks scholarship and stuff going on), gospel musicians rediscovered the 19th century shape-note tunebook era and wrote songs in the same mode. I wonder. Shape (or shaped) notes are still used. I hate them, because they're hard to read! The idea, of course, was to have four shapes, since the major scale (with its repeated tonic) comprises eight notes. Two groups in the same pattern (whole step-whole step-half step-whole step). Tetrachords, I think is the term. Different systems were tried. I think the idea goes back to the late 1700s.

Ernie--I've done the AM/PM mistake, and at first I didn't realize I had to hit "done" before it would take the scheduled date. (Duhhhhh.) I did a bunch of revisions this time, and at some point it returned to draft status. Oh, well.... Life in the cyber-zone.

I used to have a couple shape-note song books, might still have. I need to do a search for my box of old Hymn books. It must be around here someplace. I'm not practiced at sight reading. I usually just work out the song and then play it from memory as was mandatory in my rock/pop/country band days. To me shape-notes seemed pointless.

I particularly loved the Blackwood and Chuck Wagon sides (no surprise there), but also the Stamps Quartet - fascinating. Also, Jesus Is Coming Again is set to the Skater's Waltz, which I wasn't expecting.

That's the first thing I noticed about that song--two measures plus the next chord change, right from Waldteufel. But the waltz was PD by then.... I wonder if it was unconscious cribbing, which can easily happen? But it's so close. I first heard it 20 years ago, and of course I made the connection immediately. By the way, I always hear George Harrison's "Got My Mind Set on You" in "Jesus Is Coming Soon," and vice versa.