Terrible covers of hits, plus originals by Dorothy and William Beasley, Bobby Russell, and Bergen White 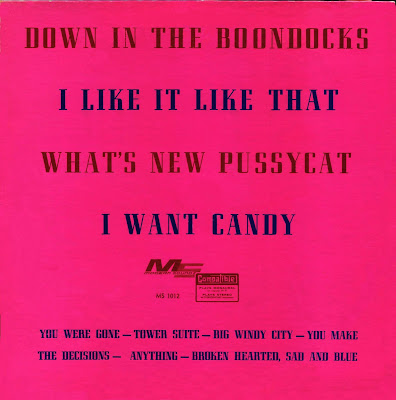 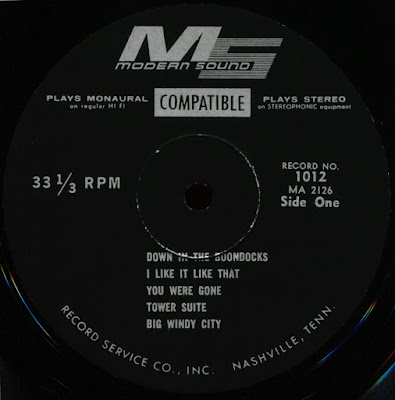 A very interesting Modern Sound (Hit Records) LP, in that the majority of selections were penned specifically for Hit Records by Hit Records people--producer William Beasley (as K. Richards) and one Dorothy J. Beasley (as J. Norris), and, under their real names, Bobby Russell and Bergen White.  I'd almost assumed that I Want Candy was a Hit Records original, too, since it's so blatantly unoriginal, but it's a cover of an actual hit for the Strangeloves, whose strange story is told here.  The other actual fakes (I never pictured myself using such a phrase) include the Bacharach-David What's New Pussycat (a wonderfully atrocious copy of Tom Jones), and a really, really bad imitation of Billy Joe Royal's Down in the Boondocks. which I remember from its endless play as an oldie on AM radio.  Meanwhile, I Like It Like That is about as anemic a copy of the high-energy Dave Clark Five as anyone can imagine--the Jalopy Five (who concocted that name?) sounds like a half-asleep Kingsmen (Louie Louie) ordered into the studio after two tours in a single day and five minutes of sleep.  I almost expect the musicians to pass out, dropping their instruments as they fall.  Would have made for a much more memorable track.  And Down in the Boondocks can't be that hard to competently cover--good grief.  But too hard, apparently, for the Hit Records/Modern Sound folks.  Were they just bent on not even trying on these?  And I just realized I already mentioned Boondocks and how bad it is, but it rates two mentions--it's that much of a boondoggle (he wrote, stretching for a pun).

Five funny-lousy hit covers, with What's New Pussycat an all-time fake-hit misfire (and therefore worth the price of the 99-cent purchase many times over), but the originals, by producer William Beasley and wife (?) Dorothy J. Beasley, plus Bobby (Little Green Apples) Russel and Bergen (For Women Only) White, are pleasant and fairly fun.  I didn't say memorable--just worth a listen.  They start with the well produced and halfway decent (but, for me, impossible to keep in memory) You Were Gone, not to be confused with the infinitely better Buckinghams B-side called You Are Gone.  Tower Suite is the weirdest of the bunch, being a halfway cool instrumental concocted to serve, in its 45 rpm form, as the flip of Theme from Peyton Place.  To me, the title had the sound of something real--maybe a forgotten 1965 instrumental.  Maybe a lost portion of Gordon Jenkins' Manhattan Tower.  So I expected to find a "real" Tower Suite, but nope--just this one.  A pleasant instrumental that's cool because it's missing any point, so I dig it.  Big Windy City is a fairly good White-Russell original with a blatantly Roy Orbison sound (its slow, broken melody and melancholy lyrics)--though Roy would have been presented with more layers of echo and louder tympani, and things would have ended on a dramatic high note.  The singer sounds like he's about to start laughing at one point, and he could have been excused.  Expert hack work--I like it.  Bergen White's You Make the Decisions has a "We need a song--quick!  We've only got ten minutes" type of sound, and I feel sorry for the guy so hooked on his love that he doesn't dare assert his own will, lest she leave him.  Dude, she's not worth it.  I wonder if this was tongue-in-cheek to an extent.  It's certainly a rush job, but of course competent.  Bobby Russell's Anything does nothing for me, however, and I wonder if Joanne Kay (Sorry, I mean Key--can't read my own writing) was really named Joanne Key.  She gets two credits at Discogs, so we'll never know.  Broken Hearted, Sad and Blue can be forgiven its omission of the Oxford comma because it's catchy, it really moves, and it has very nice stereo separation.  The Buddy Holly hiccups are incredibly out of place, but I don't mind--I could handle an entire LP of rocking country stuff like this.  The single credits J. Norris (Dorothy J. Beasley) alone as composer, but the Library of Congress (thanks, cyberspace) credits both Beasleys--producer William and sister? wife? Dorothy J. (If anyone knows the relationship, please let me know.)  In the same Copyright Entries book, this title is listed two places above Eric Siday's Bromo Seltzer Theme.

Er, enjoy.  And I forgot to include the scans in the zip file, so I'm redoing that now.  If you didn't get them, please re-download.  Apologies.

Even though it was only a little over 2 minutes long, I was unable to make it all the way through What's new Pussycat. Does that make me a bad person?

I COULD understand every word sung in Down in the Boondocks, so that should count for something.

This could have been part of one of those 5 record box sets they used to sell on late night TV.

Loads of fun, Thanks.

My pleasure. And I can understand not being able to get all the way through What's New Pussycat. That's quite reasonable!

Thanks--I've corrected it. Carelessness on my part. I was taking quick notes from Discogs, I think.

I think it's worth considering that some of the original artists live might not have sounded any better than the cover artists do. These remakes aren't very good, but would the Dave Clark Five have sounded much better in the same circumstances? Mike Smith was a pretty good singer, but the instrumentalists? Neither version approximates the New Orleans rhythm of Chris Kenner's original recording.

Good point. The originals have the major advantage of far better, far more expensive productions. And better music direction. The Beatles would do 40 takes to get their early stuff right. I can only imagine what the DC5 would have sounded like without the absurd amount of echo.

I think at some point the people who made these records finally realized that if they threw in a couple of originals with titles that were close enough, they would still sell about the same, and they would get song writing royalties as well! I'm sure you're aware of many tribute albums that feature one or two actual covers of the artist being given tribute, and many other tracks that just have titles that may or may not sound like something the artist did. Why stick to one rip-off at a time when you can get away with more!

Which of these songs don't go together? Any/all of them. Leave it up to the likes of Modern Sound.

Auxiliary fakes! Or maybe fake-fake hits. You nailed what makes a track like "Tower Suite" so special. The myriad fake Fab Four LPs were packed with tracks whose titles sounded like genuine British Invasion filler. The music, on the other hand.... I think the Wyncote label wins the award in that department with its Beatles knock-off LP, which was a favorite of a musician friend of mine. Almost-fakes would be another possible label, though that's a little vague. But, then, so is the trend we're talking about.

This is maybe the least motivated LP I've ever heard on this label. It's hodgepodge nature makes it a classic find. I have no memory of when or where this showed up. Maybe it just appeared in my collection on day--a dimensional burp. It certainly sounds like the result of one!

Well, that's half an hour of my life I'll never get back again. LOL
As always, you've done wonders to restore these recordings, even if they don't deserve it, and present them before an unsuspecting public.

Keep up the excellent work!

Thanks! And I'll reveal a little trick I pull on cheap pressings (like this one), on which the surface hiss noticeably rises on the track fade-out: I apply noise filtering (using sampled hiss) on the very last note that sounds. I set the filter at a minimum setting (I never over-filter), and this way the hiss is far less noticeable AND there's no sudden dip, as there would be if I applied the filtering at the start of the hiss. Weird, but it works. Way too much trouble for these cheap, exploitation LPs, but somehow that makes it more fun. I like going to town for things that don't deserve the TLC. Maybe I should seek professional help!

Cheap pressing? That's not the way they put it on the back cover. According to them everything is the best and most modern. Why buy the high priced spread?

Maybe cheap was the wrong word. Chintzy, cut-rate may be better adjectives. (-: Yeah, the hilarity of the cheapies is the way they talked up the quality of the product. As in, you're paying less but getting the same quality. They figured no one would take them to court for not being completely honest. In fact, they probably figured no one would even read the back jacket hype!

Joel--That sounds like the kind of trick this label would pull, but how do you know how what Bergen sounded like? Forgive me if I'm spacing out--I do that from time to time. But your theory sounds very plausible.

His album For Women Only is a classic. He has a distinctive high voice. Check out https://www.youtube.com/watch?v=vRl_5ncruJQ
I can't swear by it, but they sound very similar.

They do. I'm tempted to think they are the same singer.