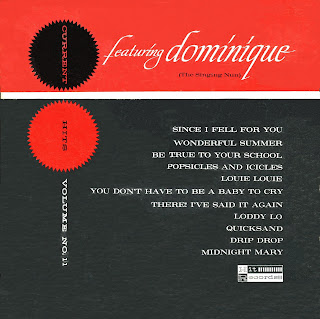 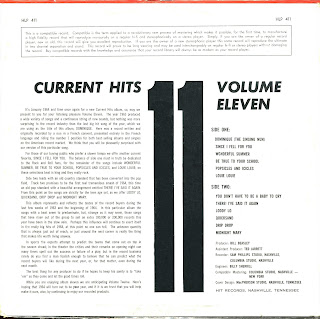 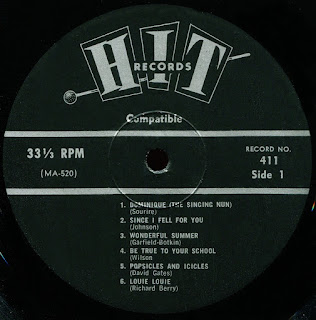 Today, a 1964 album of fake hits from producer William Beasley's Hit Records label of Nashville.  This find is kind of cool, because this outfit typically released its LPs on its Modern Sound label--this is only my second or third 12-incher with "Hit Records" on the label and jacket.  The same folks, and everything, but I wonder why they were inconsistent.  Carelessness?  A plot to confuse vinyl collectors of the future?

These were engineered by Billy Sherrill, who later became a hugely successful country music producer.  I'd say "the legendary Billy Sherrill," but I hate that use of that word.  I never use "legendary" to refer to people who actually exist or existed.  Ray Charles was not legendary, for example.  Paul Bunyan, King Arthur, Robin Hood--legendary.  Gary Cooper--not legendary.  Et cetera.

So, despite the cut-rate vinyl, the audio is gorgeous, and a number of the covers are very good, with Louie Louie uncannily so.  And I just now discovered that Popsicles and Icicles writer David Gates co-founded the single most nothing group in the history of popular music, Bread.  I could have lived without knowing that.  Bread's hits made such AM-radio barf as What Have They Done to My Song Ma and I Was Kaiser Bill's Batman sound like, well, music.  I was going to add Leave Me Alone (Ruby Red Dress), but I don't think even Bread could make that sound like music.

Sorry--jumped off topic.  So, I've tried to track down the 1963 hits being faked here.  (This LP came out in January, 1964.)  Dominique was by singing nun Jeanne-Paule Marie "Jeannine" Deckers, who was played by Debbie Reynolds in the 1966 movie (you'll never guess), The Singing Nun.  I very vaguely remember all of that.  Sort of.  The rest are easier.  The great Buddy Johnson ballad Since I Fell for You was a big 1963 hit for Lenny Welch, so he must be our man.  Robin Ward (Jacqueline McDonnell) gave us Wonderful Summer, which I kind of, sort of remember from the day.  Be True to Your School was of course the Beach Boys, and Hit Records proved, with each and every attempt to cover the group, that they couldn't get anything close to Brian Wilson's sound to save their lives.  They had better luck with the Beatles, doing halfway decent Fab Four copies, even a My Bonnie that rocks harder than the original.  Anyway, Popsicles covers the Murmaids, Louie Louie covers the Kingsmen's own inept and pared-down (but lovable) cover of the 1957 Richard Berry original, You Don't Have to Be a Baby to Cry mimics the Caravelles, There! I Said It Again manages to sound a lot like the Bobby Vinton hit, Loddy Lo is a decent copy of Chubby Checker's hit, Quicksand falls with a splat, Drip Drop is dreadful (this was the best Dion impression they could manage?), and Midnight Mary is a less than superb copy of an infinitely better produced single by Joey Powers.  (The Powers 45 rpm label names Artie Wayne as the producer--the excellent Freddy Martin crooner?)

I do love the Kingsmen's Louie Louie, though it simplifies the Richard Berry original outrageously, in addition to garbling the lyrics.  Yes, that's much of the fun, but it's worth noting that the Beach Boys' 1964 version of the song does it as originally performed, and quite beautifully.  I wish the Beach Boys would have released Louie Louie as a single, but it likely would have tanked, since by then everyone knew the song as a garage-band three-chord wonder.

Despite the fact they never hit the mark, the Hit Records Beach Boys covers always entertain me.  I'm not sure why.  Be True to Your School, for instance, has a lot of drive, and you can tell they're trying hard to get the feel of the original.  I guess this label's BB copies could be labeled entertaining failures.  If you're going to do it wrong, do it badly in a fun way.

Dominique (The Singing Nun)
Since I Fell for You
Wonderful Summer
Be True to Your School
Popsicles and Icicles
Louie Louie
You Don't Have to Be a Baby to Cry
There!  I've Said It Again
Loddy Lo
Quicksand
Drip Drop
Midnight Mary

Many favorites here (and some less than that), so I am eager to hear the collection.

I had forgotten Chubby's "Loddy Lo." His records were always fun back then.

Bread were certainly white-bread bland, but they were professionals - studio musicians, no?

"Since I Fell for You" was a big favorite of mine in the terrific Lenny Welch version (he's good). I didn't hear the Buddy/Ella Johnson record until much later.

I see a lot of these collections and think of you whenever I see them. Is that a good thing?

Hope you enjoy. I always confuse "Since I Fell for You" with a later song, but at the moment I can't remember what that later song is. I think I just invented a new category of confusion....

Only you can answer that.

Reading your comments on these discs is almost as entertaining as listening to the music. Cheers.

The reason for the ten song Modern Sound albums (which were usually grouped by subject matter) sold for 99 cents. The Hit records label , pressed on better vinyl and contained 12 current hits sound-alikes, retailed for $1.98 and were sometimes sold in the same Hit Records racks as the singles.

HitRecordsofNashville--That's interesting. I hadn't noticed the different number of tracks, but I just compared one of each and, as you say, there are 12 tracks vs. 10. And the Hit Records vinyl is noticeably more solid. Thanks for the info!