Sorry.  Anyway, the Haunted Victrola is wound up and ready to grind out the grim grooves of thirteen more terrifying titles from the cobwebbed corners of my 78 collection, or something like that.  I did some Googling to determine whether or not "witch hazel" (or, in this case, "Which Hazel"--ha, ha!) has a Halloween association in our pop culture, and, yes, it does.  So, we'll be hearing Al Herman's Which Hazel, whose lyrics include the phrase "padded cell."  My kind of lyrics.  Edward MacDowell's Witches' Dance was composed in 1883, and it contains many of the standard melodic and harmonic musical cliches of this season.  Which is to say, those cliches were around that early (and probably earlier), proving that nothing is new under the moon.  George L. Cobb's Peter Gink uses themes from Grieg's music for Peer Gynt (the source of the Halloween standard, In the Hall of the Mountain King), so that's why it's here.  Last time, we heard Zez Confrey's solo piano version of his Greenwich Witch--now we get to hear Frank Westphal's slower but just as jazzy band version.

And there are nine other jazzily jarring, creakily quirky, and disturbingly delightful dance doings and concert concoctions sure to keep the Halloween crowd crashing your crypt to join your Spook Age Boo-chelor Pad party.  Just don't send them over here--they're your worry! 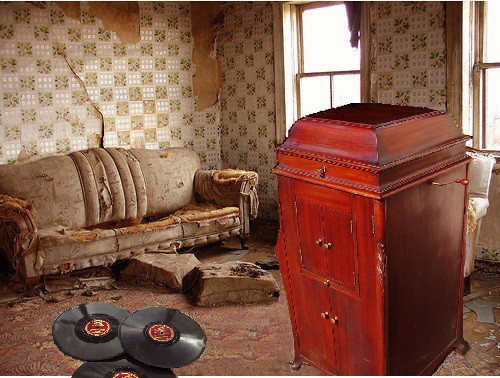 For Halloween, thirteen selections from my overflowing 78 collection, covering the years 1908 to 1934, and all ripped and restored by me.  What titles--Mummy Mine, Vamp Me, Spooky Spooks, Dance of the Demon, Greenwich Witch, The Loch Ness Monster....  This slaylist will have you tapping your toes all the way to the cemetery.  As the beatnik ghost said, "It's just tomb much, man."

Note that British radio comedian John Tilley's "humorous monologue," The Loch Ness Monster, hails from the same year (1934) as the famous Nessie hoax photo known as the "Surgeon's Photograph."  In this brilliant skit, not only does Tilley treat the Nessie legend as a joke (and then some), he presents it as the latest in a long line of tourist-baiting scams.  If Tilley could figure that out back in the day, why is the myth still afloat eight decades later?  Extremely abstract humor, and not unlike modern stand-up.  And I just discovered that Tilley died one year after this recording--he was only 36.  Damn.

Meanwhile, Joe Haymes' Little Nell sort of anticipates Spike Jones' 1945 send-up of Chloe.  Also Jones-style are the sound effects on the Columbia Orchestra's 1918 A Cat-Astrophe.  In the realm of corny humor, nothing is new, I guess.  And I should note that Eduard Holst, the composer of the awesome two-piano Dance of the Demon, is no relation to Gustav (The Planets) Holst.  The duo-piano team on the Demon disc, Victor Arden and Phil Ohmen, were one of the best of the 1920s.  Appropriately, our slaylist ends with the famous funeral march from Chopin's B-flat minor piano sonata.  One of the all-time "Where did that come from?" themes, of which we usually only hear two bars when it's quoted in cartoons and movies.  MY(P)WHAE is giving you the whole thing, and from a cracked 1908 78 (which I repaired with audio splices).

To the slaylist: The Haunted Victrola 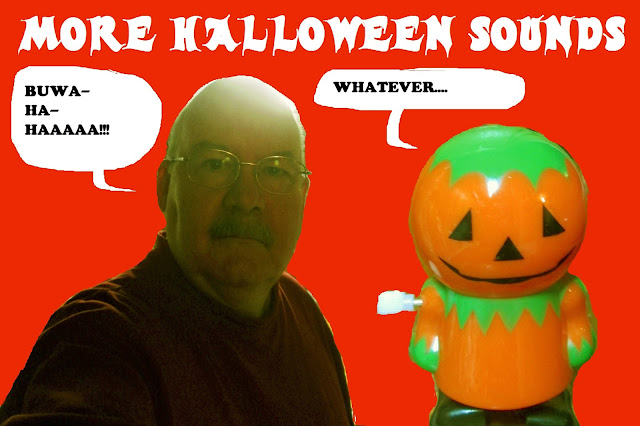 For our Halloween, three Lee originals, two of them new to the blog.  Wind-up Pumpkin Man commands you to download without delay: 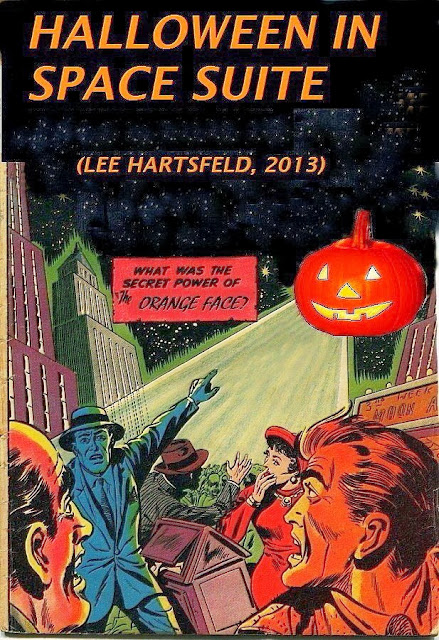 From 2013, my Halloween in Space Suite, consisting of "Dangers, Thrills, and Monsters;" "Space Spooks;" "View from the Space Station;" "Meteors!!" "Memories of Earth," and "Peacocks in Space." I did a little bit of MIDI entry and even less pitch and time expansion/compression, but otherwise everything is "live."  What you hear is what I played.  That's not a take on Flip Wilson's once-famous "What you see is what you get, baby!  WOOOO!"  Okay, yes, it is.

I think my suite nicely shows off the terrific tones to be found on the Casio WK-3800, whether it's Halloween on Earth, or... HALLOWEEN IN SPAAAAAACE!!! (Space... space... space....)

Composed and played by Lee Hartsfeld on his Casio WK-3800, with assistance from Sonar X2 Essential and Magix Audio Cleaning Lab MX.

Posted by Lee Hartsfeld at 1:17 AM No comments:

The 1964 Sunset House Christmas mail-order catalog has a number of creepy, Halloween-style gifts of the type also featured in the comic books of my youth.  I figured out the year from four clues: two 1965 calendars, a commemorative JFK bracelet charm, and a reproduction of the Beatles' Royal Command Performance poster ("complete with authentic autographs of Ringo, Paul, John and George," no less).  So this is probably Sunset House's Christmas 1964 edition.  (Another clue: the Ripley's--Believe it or Not! Sea Circus was copyrighted in that year.)

The order form and envelope are still there, so it appears no one sent for anything from this copy.  Maybe he/she/they already had multiple toe-warmer footrests, indoor hopscotch games, bobble-head car trolls, grenade lighters, 4" replicas of a genuine Amazon Jivaro native shrunken head, pocket-sized fortune tellers, electric back scratchers, and Gingerbread beanbag families.  Maybe their kitchen table was covered with the last five Sunset House orders.   Maybe they were under a court order to abstain from catalog ordering of any kind.  We have no way of knowing, so we're free to make things up.  (Or, describe the History Channel's format in a single phrase.)

Anyway, here are some of the more Halloween-specific ads, not counting the genuine shrunken head replica, from this priceless document of cheap gifts past.  Personally, I'm torn between the pants-falling-down Frankenstein monster, the creeping hand, and the winking skull turn-signal.  Pick your own favorites: 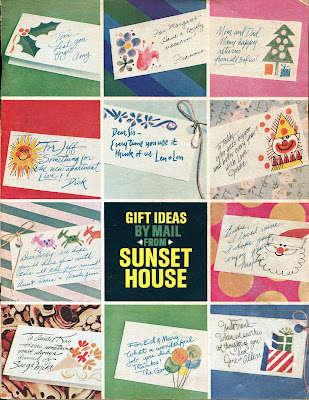 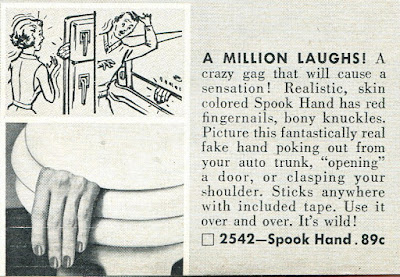 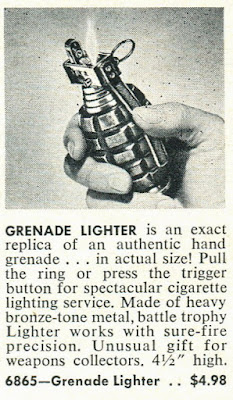 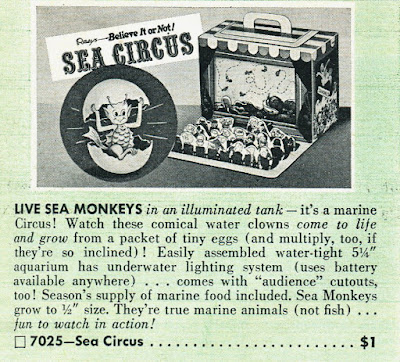 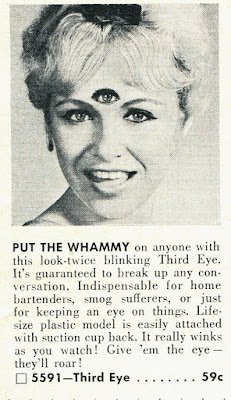 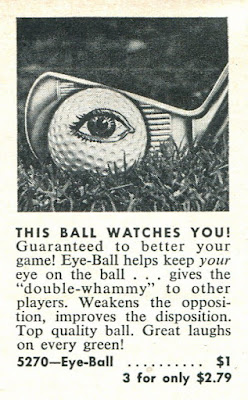 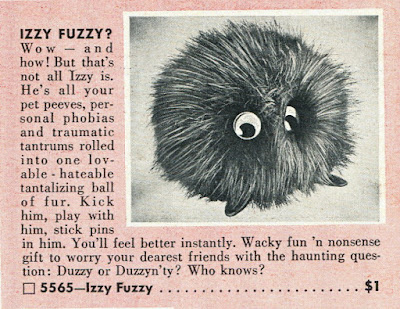 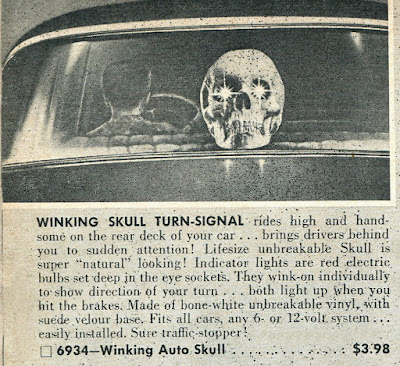 My latest Halloween composition, created last night.  Water on Mars means monsters on Mars, because, where there is water, there are monsters.  Somebody said that at some time, though I don't know who or when.  Maybe no one ever did.  But that doesn't mean it isn't true! 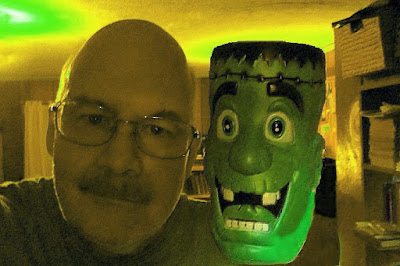 More original Halloween compositions.  At this point in the Halloween countdown, I would be sharing David Rose, Morton Gould, Bob Hudson, et al., but you know how my vinyl and shellac sharing worked out.  If you don't, read this 2013 post for the whole horrible story.  This was a very different blog until that point....

Anyway, seven original Halloween pieces by me, with the first four extracted from my Ghoultide suite of 2011, which I have on disc in a confusing collection of complete and in-progress tracks.  At that time, I was multi-tracking with a method too cumbersome to describe--I have no idea how things came out so well.  The last three numbers are from my 2006 Halloween Suite (though "Phone Calls from the Dead" is a 2007 rewrite).  The "Herrmann" in "Herrmannesque" is Bernard Herrmann, and it was inspired by a Twilight Zone harp figure and a Herrmann radio soundtrack featured somewhere at some site.

"So, Lee what inspired your 'Herrmannesque"?"  "A Herrmann radio soundtrack featured somewhere at some site."  "Oh."

All composed, played, and/or programmed by Lee Hartsfeld. 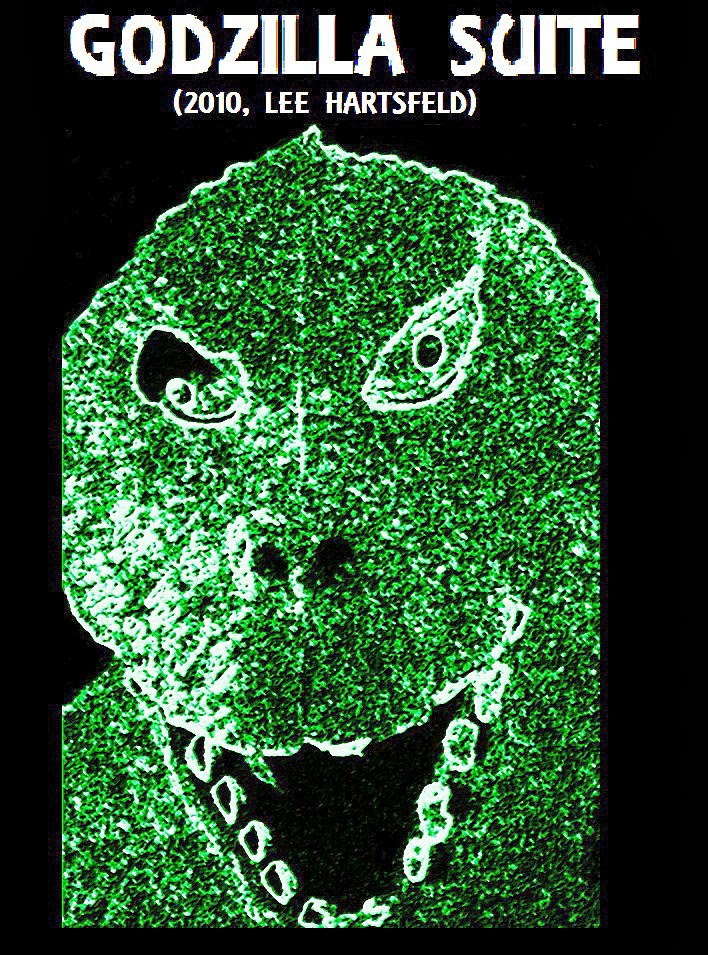 From 2010, my eleven-part tribute to the big green guy, plus three bonus Godzilla tracks, including my 22-year-old "Godzilla Rag."

Posted by Lee Hartsfeld at 4:10 AM No comments: