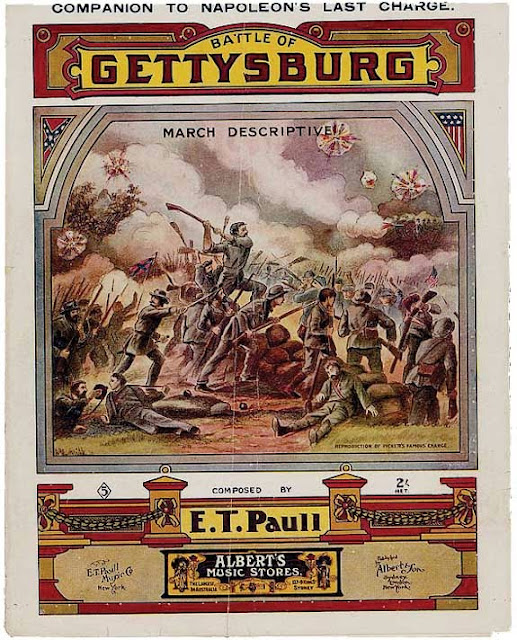 Four great 78s for Memorial Day, 2015, all ripped by me from my overflowing collection.

E.T. Paull's Battle of Gettysburg march is a joyous affair, though something tells me the real thing was anything but.  However, I wasn't there, so....  We're hearing the beautifully performed (and recorded) 1917 Victor recording by Conway's Band.

The lively and memorable American Army March was composed by Geraldo Iasselli (Google says "Iasilli"), and it's performed here by Giuseppe Creatore's band on a 1925 Victor electrical recording.  The fidelity is unbelievably advanced for 1925.  Listening to it through phones, I guessed 1929 or 1930.  I was wrong.  A closer look at the label before listening would have told me, but then my assessment of the fidelity wouldn't have been completely objective--my ears would have known it was 1925.  The preceding sentence was pure M(Y)PWHAE prose.  To the amazing fidelity:

Finally, two 1921 sides (the Victor label, again) by the United States Marine Band: a superior Sousa march, Yorktown Centennial, and the complete Anchors Aweigh march, which I didn't recognize until it got to the famous "Anchors aweigh, my boy..." strain.  How many times did I hear that strain in the Navy?  Thousands.  Maybe millions.  Good thing I love it!  In other news, one of these days I'll learn to spell "Centennial" without Spell-Check.

Is it just me, or are there Johann Strauss, Jr. quotes happening in Anchors?

Lee
Posted by Lee Hartsfeld at 5:03 PM No comments: 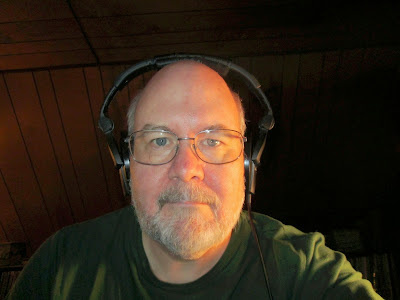 I'm cheating with this selfie--I no longer have my beard.  The beard lasted several months, however, before skin irritation compelled me to expel it.  I was surprised it lasted that long.

Think about it: when we're 10, for instance, we're starting our second decade.  20, our third.  And so on.  We age ahead of ourselves.  So, every time you ask yourself the birthday question, "Am I really that old?" you are, in fact, even older than that.  I have no idea what I just typed--it sounded good in my head.

This cat pees on TV monitors!! 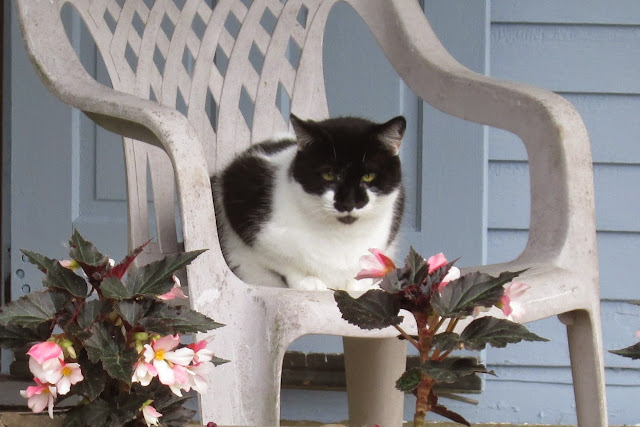 There you have it--Wesley's confession.  Actually, he hasn't confessed to anything, nor has he shown an ounce of remorse.  (He's a cat.)  And, technically, he peed under the monitor, but that's all it took to kill the audio and video.  Now all we have, post-pee, is a fuzzy white image that just sits there, doing nothing.  The monitor is fairly new.  Was, I mean.

So I figured that some on-line shaming might work.  Let's just hope Wesley comes across this page, sees himself (and the account of his deed), and feels really bad.  In fact, I'll just leave this page up on Bev's PC, saving Wesley the trouble of a search.

Yes, Wesley.  That's YOU.  The cat who peed on the TV monitor.

This experiment in on-line cat-shaming was brought to you by MY(P)WHAE.

Lee
Posted by Lee Hartsfeld at 1:37 AM 3 comments:


The handsome character on the right is John Blazo, who was Pat Ryan #2 on Ryan's Hope, my favorite soap (of the two soaps I like--the other being Dark Shadows).  I wish they'd kept him longer than a year and some months, but they wouldn't listen to me, especially given that the show had been off the air for nearly 20 years by the time I saw it.  A little late to be protesting a recast decision, I suppose.  Anyway, I thought John was marvelous.

I'd read that John was performing cabaret-style jazz, and I've long been on the lookout for same.  No luck, but then Youtube came to the rescue with fourteen Blazo tracks, uploaded by John himself:


Posted by Lee Hartsfeld at 8:42 PM No comments:

My Mother's Day card to Bev, who just turned 81 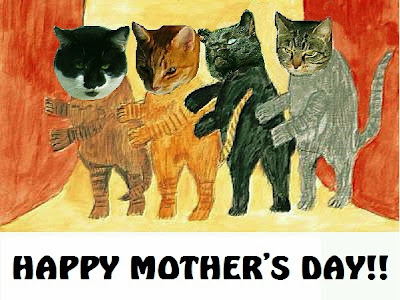 Notice that this is the Max Raffler painting featured in the last post, only with modified mugshots.


Lee
Posted by Lee Hartsfeld at 2:52 AM No comments: 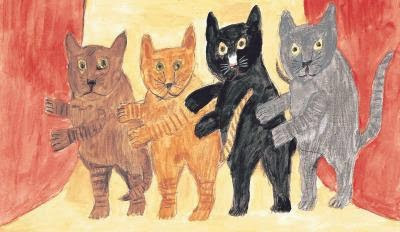 If Einstein were alive today, and he wanted to be taken seriously by Millennials, he'd have to do stand-up.  Relativity, Schmelativity.  Does he have a background in "improv"?

If Darwin were alive today, and he saw a FFRF "Praise Darwin" billboard, he'd say, "Freedom from Religion?  Are these people illiterate?"

If Jefferson were alive today, he'd say, "You're kidding!  Everyone gets to vote?  What country is this?"

If Birth of a Nation is such a bedrock classic of cinema, why would no one in his or her right mind remake it today?  I had to watch that wretched thing in a film class, and it had me rethinking my major (Popular Culture).

Whenever a reality-based person insists that his or her claims are "based on science," I'm not impressed.  You see, I only sign on to claims that are endorsed by 9 out of 10 doctors.

Science, of course, exists to endorse ideas and claims.  Some people think it exists to test things, but I don't know where they got that silly idea.

I was thinking of becoming a Faith Voter for Hillary, but then I remembered that the Establishment Clause forbids faith voting.  Unless MSNBC is pulling my leg.

Besides, is it "Faith Voters for Hillary" or "FaithVoters4Hillary"?  I want to know what I'm joining.

By the way, I think Hillary will win, but only despite the best efforts of my party (Democrats).  Nothing like two-party opposition to bring out the fight in a candidate.

Is one's opportunities for social mobility better as a U.S. citizen or a member of a bee colony?  According to studies, approximately the same.  I'm leaning toward bee colony.

I've been trying to pinpoint the exact moment in pop culture history when "The Beatles" became "John Lennon," but no luck so far.  Back in my day, "The Beatles" were John, Paul, George, and Ringo.  That dates me, I realize.

Getting old is not for sissies.  That's why sissies, on average, die around 30.

There's an "argument from evil" that's used to disprove God.  It's beastly clever, because it involves using arguments of faith against themselves.  That's an awesome strategy!  And original, too.

I remember when feminism had something to do with compelling society to take women as seriously as we take men.  Then came the Internet, and now "feminist" seems to mean "hooker."  As in, doing your best impression of one on-line.  Because acting that way is empowering.  Not to women, but to someone.

If Einstein were alive today, and he wanted....  Oops.  Already did that one.

By the way, I'm practicing the modern style of using short sentences.  Or trying to, anyway.  It'll take time.  Wish me luck.  See you.


Posted by Lee Hartsfeld at 1:31 PM No comments: