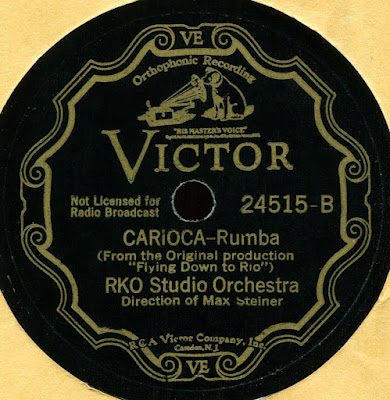 This 78 was sitting there, and I said, "I ought to rip and post this."  I'd been planning to for years and never did, and there's nothing like the present.  Unless it's another gaudy sweater no sane person would wear past December 25.

Very cool sides here, and the two on-line rips I heard are dreadful, so hopefully I've done my good sound-restoration deed for the day.  Please, people, stop turning perfectly good-sounding 78s into mush.  When filtering, less is more, or whatever the expression is.  If you want your 78s to "sound like" LPs, buy LPs and pretend they're 78s.  You'll get a vinyl-era noise floor and you won't have to spring for a 78 stylus.

To the music.  Carioca is by Vincent (Tea for Two) Youmans, in case you didn't know.

Lee
Posted by Lee Hartsfeld at 8:52 AM 5 comments:

Happy Veterans Day!  Here are some 78s from my collection, newly ripped by me.  I've never been sure why the sound is so lousy on the Will Bradley/Ray McKinley/Freddie Slack sides, but that's how they were pressed, so....  Perry Como, my all-time favorite pop singer, hit it huge when he left the Ted Weems orchestra and joined RCA in 1943.  I've ripped Perry's first two RCA sides, Goodbye, Sue and There'll Soon Be a Rainbow, both featuring choral backings, since the 1942-1944 AFM recording ban was in effect.  There's a weird and, to my ears, charming sound to such sides.  Temptation and I'll Always Be With You, two of my favorite Como tracks, are post-ban (1945) and feature Ted Steele's orchestra.  Como seemed to be reaching into the Russ Columbo catalog, since he also recorded Prisoner of Love (great side, but not in this list).  Also taking us back to WWII--two highly un-PC 1942 Carl Hoff sides, You're a Sap, Mr. Jap; and We Did It Before (And We Can Do It Again).  Pop music history as it happened.  And three huge Will Bradley hits of the period, which I've already mentioned but haven't named yet.  They are Beat Me Daddy (Eight to the Bar) and Down the Road a Piece, neither of them the first pop-chart boogie-woogie numbers, but they did tons to establish the style as an official branch of swing and a song folio genre.  Both are from 1940, as is the third, Celery Stalks at Midnight, which sounds a little ahead of its time, stylistically, to my ears.  Maybe that's just because it follows two helpings of eight-to-the-bar.

Good Bye Dolly Gray goes back to the Second Boer War, and this 1902 recording by the Columbia Quartette is one of my favorite (and noisiest) 78s.  Of course Hugo Frey's charming One-step My Dough Boy is from WWI--it's played by the terrific Joseph C. Smith orchestra, Smith having been the Victor label's Paul Whiteman before it had Paul Whiteman.  And once again I'm featuring Raymond Newell and Ion Swinley's elaborate 1929 rendition (with sound effects and actors) of the 1904 anti-war art song, The Trumpeter (J. Francis Barron-J. Airlie Dix) in a brand new rip.  It remains a superb number and recording.  The side closes with the 1861 hymn, O God of Love, O King of Peace. 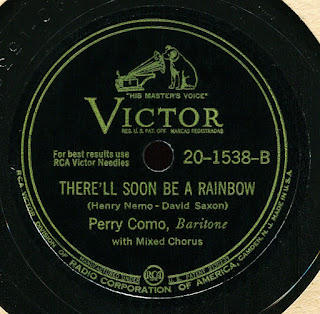 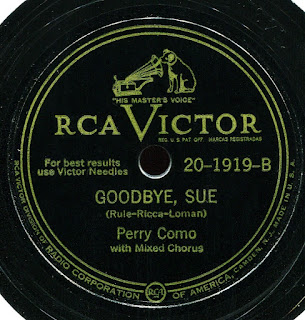 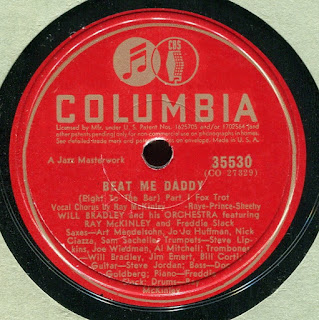 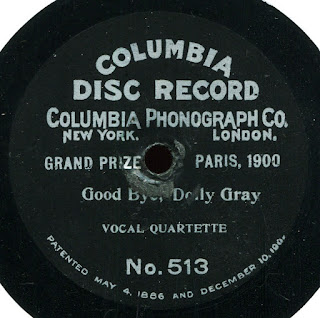 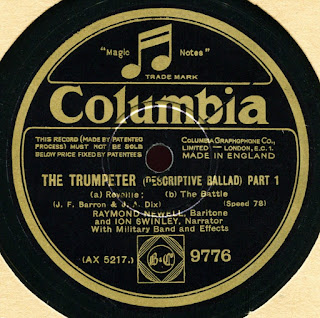 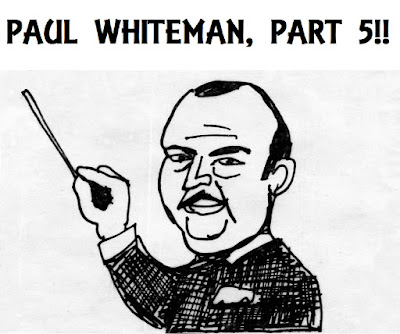 My own Paul Whiteman sketch, from around 1981.  The lettering is new, of course.  And this is Part 5 of my Paul Whiteman series, which means three more are on their way.  Yup, three.  Part 8 will focus on Whiteman-related solo sides, with numbers by Ramona, Roy Bargy, Chester Hazlett, and the jazzy Whiteman orchestra subgroup, The Virginians (the first of its kind, claims AllMusic).  So... stay tuned.  And enjoy today's mix, covering the years 1920 to 1934, during which the Whiteman sound changed considerably, of course.  Incredibly might be the better word.

And my VinylStudio program remains the most amazing software taking up space on my PC, next to my MAGIX editing program--it is responsible, as I've been noting every post, for keeping the response curves honest.  The eq'ing and track splicing remain the duties of MAGIX.  Put it all together and you have very, very old sounds, but not sounding old in the traditional sense of old, when it comes to audio.  The established meaning of "old" in audio is lousy, but I've tried to get these 78s sounding as un-lousy (and, therefore, nontraditional) as possible, with Chicago presenting the most demanding restoration feat, given its "beater" condition.  (Record collector term.)  But it's not an easy one to find, at least in my price range, so I went all-out, and it sounds pretty not bad.  It's an essential PW side, as it features none other than Ferde Grofe on a terrific piano solo. 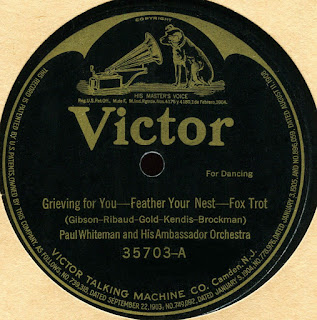 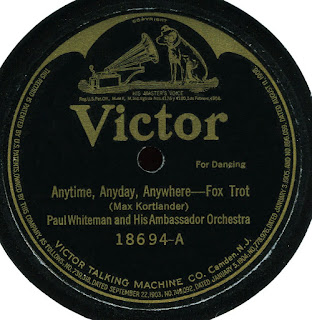 Lee
Posted by Lee Hartsfeld at 8:29 AM 6 comments: 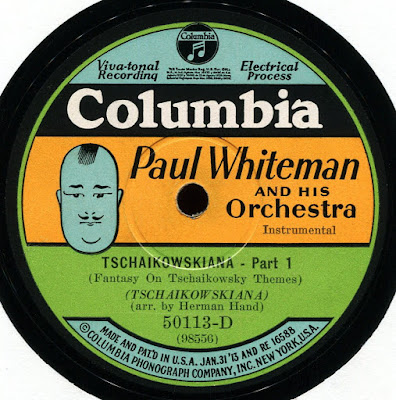 Every rip deserves a second chance.  I wasn't happy with my first job on this disc, so I ripped it again, this time using my 2.7 mil needle instead of the 3.5.  I think it did the trick.  This file sounds much better.  Hope you agree.

Lee
Posted by Lee Hartsfeld at 1:44 AM No comments:

George Gershwin, Fred and Adele Astaire--"Fascinating Rhythm," The Half of It Dearie, Blues" (1926) 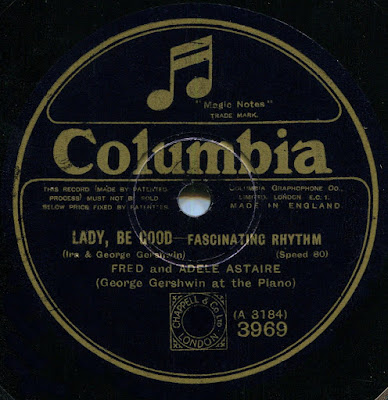 This 78 was recorded in the UK in 1926, and it features George Gershwin plus Fred and Adele Astaire in two selections from Gershwin's Lady Be Good.  I was thrilled to find this copy in Scotland circa 1980 (while I was stationed in that country), and I paid a mere five pounds, or about $12.  Fred and sister Adele sing as George Gershwin hammers the ivories on Fascinating Rhythm, and it's just an amazing side.  Life-altering, if you ask me.  Prior to finding this in the now-closed Gramophone Emporium in Edinburgh, I'd heard a snatch of it on the radio (BBC Four, I think), and of course I was dying to hear the rest.  As you'll notice, the designated speed is 80 rpm, and I adjusted my turntable as close to that speed as possible.  It's close enough.  The music really moves at 80 compared to 78 rpm--much moreso than I would have expected.  I think I'll feature both speeds so you can hear the difference.  Interestingly, that difference amounts to approximately a semitone.  (Helps to have a synth keyboard next to the PC desk.)

The flip is fluff (always wanted to type that) by comparison, though I am right now revising my take on it.  I originally described Gershwin's piano work as clunky on this number (Half of It Dearie, Blues), but, at least at 80 rpm, it's not only not clunky, it's impressively fast..  And I talked about too many Rhapsody in Blue quotes--specifically, the double-time chords George throws in a few times too often--but now I'm not positive they're actual RIB quotes.  They're standard parallel "big city" chords of the type we expect from George.  Maybe they're meant to evoke RIB, maybe not.

And Astaire's singing on the Dearie number, which I described as pretty bad, is actually perfectly adequate.  The song is silly, but that's the job of novelties.  It's not the dud side I judged it to be, unless we're comparing the song and its performance to the magnificent flip, and that would be setting an unfair bar.

Bottom line is, this version of Fascinating Rhythm changed the way I hear Twenties pop music, and Twenties pop is my favorite pop.  So it's awesome to have it in my collection.

Fascinating Rhythm/The Half of It...--Fred and Adele Astaire, then Fred only, with piano by George Gershwin, at 80 rpm.

Fascinating Rhythm/The Half of It...--78 rpm Lee

UPDATE: Buster and I both agreed that 80 rpm is way too fast a playback speed, despite the label indication--namely, that, for some reason, the label sped things up by recording at a slower speed, as American Columbia accidentally did with Bing Crosby and Al Rinker's I've Got the Girl of the same year.  It could have been accidental in the case of UK Columbia, too, or the label may have done it deliberately to alter the sound of Astaire's singing or George's piano tinkling--to make things sound brighter and, to use a period term, snappier.  Tho knows?  Anyway, Buster took my 78 rpm rips and slowed them down about 1/4 tone, and here are the results: GG, FA, Corrected speed.  I agree with Buster that his speed corrections sound just right.  What do your ears think?

In this Paul Whiteman-athon, a number of famous songsmiths: George Gershwin (I'll Build a Stairway to Paradise, Do It Again!),  Irving Berlin (Lazy, What'll I Do),  Rudolf Friml (March of the Musketeers), Rodgers and Hart (Do I Hear You Saying), George M. Cohan (You Remind Me of Your Mother), and Domenico Savino (Burning Sands; credited to D. Onivas), with Savino also acting as arranger for O, Ya Ya.  And there's a two-sided 12-inch Columbia disc called Tschaikowskiana, arranged by Herman Hand, which is exactly what it sounds like.  It's not the most exciting medley, but it does show a great deal more respect for Tschaikowsky/kovsky than Spike Jones ever did.  A number of big Whiteman hits here, including the million-selling 1923 Linger Awhile, which revives the Whispering slide whistle, only with clever syncopated horn punctuation, making this almost definitely a Ferde Grofe arrangement, though it's not listed as such at the William College page.  It's him, though.  Has to be.

The two Gershwin numbers are, of course, pre-Rhapsody in Blue, and I'm 99 percent sure these are Grofe charts, too.

The singers include Bing Crosby, Al Rinker, Charles Gaylord, Austin "Skin" Young, Billy Murray, John Sperzel, Fritz Zimmerman (yodeling), The King's Jesters, and Jack Fulton (during the March of the Musketeers vocal refrain).  These were all ripped and edited by me from 78s in my collection, and it looks like I have enough sides ripped for three more parts.  We'll see.  I mean, we'll hear. 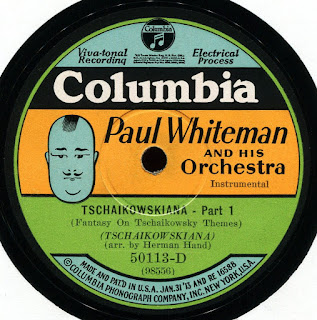 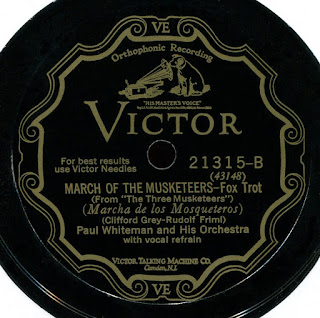