From my collection, eight sides by this marvelous violinist/fiddler.  Rather than try to write a blurb myself, let me refer you to some terrific passages about Richardson from Play Me Something Quick and Devilish: Old-Time Fiddlers in Missouri, by Howard Wight Marshall: Richardson.

Amen.  It's a crime against country music history that accomplished, "legit" players like Richardson and D'Almaine have been denied the credit due them on account of the usual idiotic obsession with authenticity vs. lack thereof (paging Rolling Stone mag).  That kind of snobbery happens in every area of collecting, it seems, and I'm more than tired of it.  Which won't stop it from happening, of course.  But I'm still tired of it.

Those folks who get off on putting the bulk of popular music into an "other" or "miscellaneous" status are people who take themselves far more seriously than the history they're studying.  As a rule, I look for reasons to include a given recording into a given genre, even if this means denying myself the thrill that comes with declaring artists and their performances unworthy of a proper classification. And there are two darned many categories in the first place, many of them imaginary or redundant.  300 categories of punk, for instance.

Anyway, eight virtuoso fiddle sides, and I'm sure I have another Richardson 78 hiding in my rows, but it refuses to show up.  Thanks to my (you guessed it) 3.5 mil 78 stylus, these sides have an up close and personal sound I've heard anyplace else, including in my own previous files.  Even the piano accompaniments ring out, something they don't do anywhere else.   Condition on these sides in not Excellent-plus, so bear with the hiss.  Pristine Richardson 78s must exist, but none have found their way into my stash....

Titles listed above.  All 1916, save for Dance Wid' a Gal and Irish Washerwoman, which are 1921.  Enjoy these awesome performances! 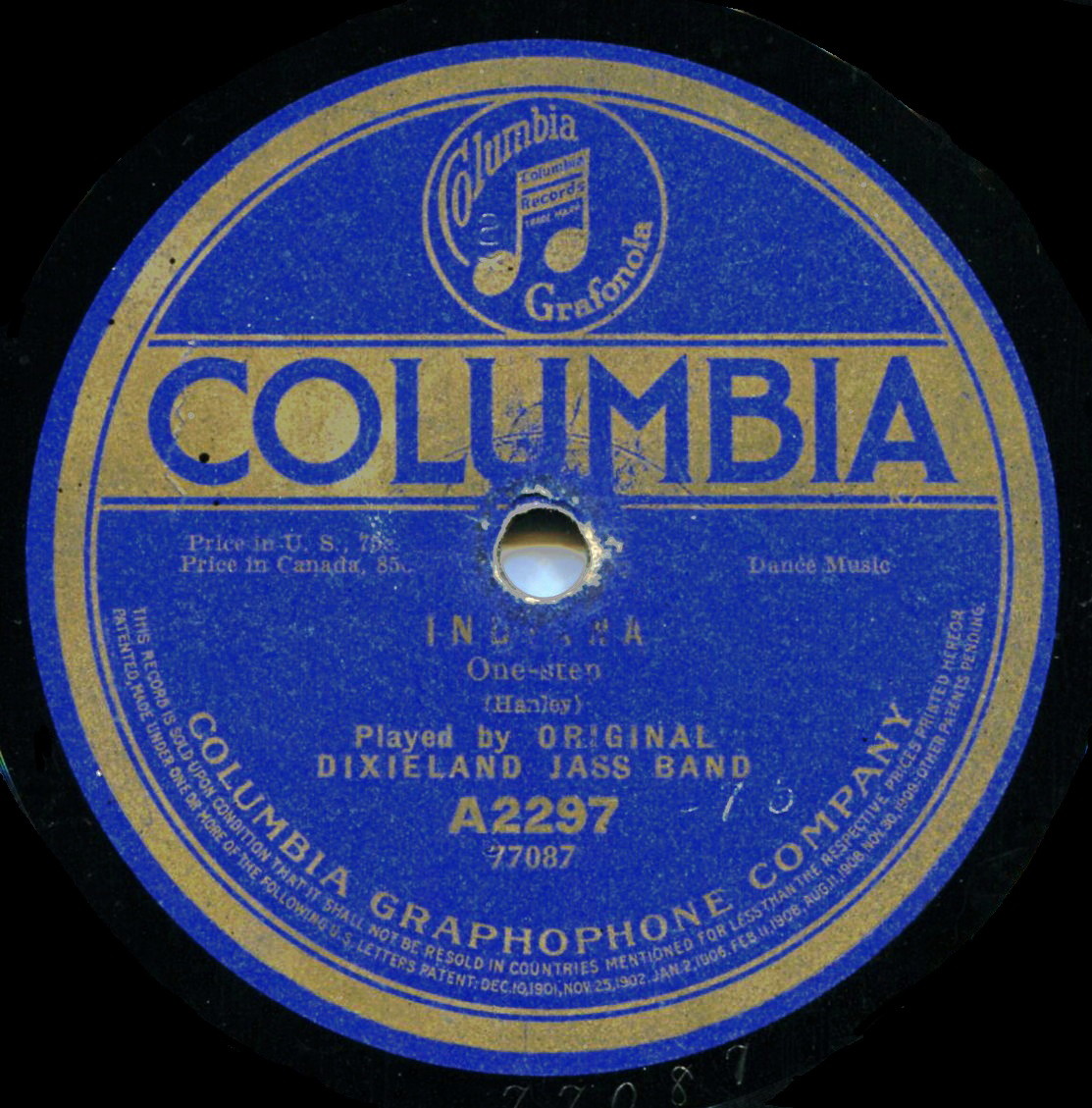 Today, 78s ripped with my new, 3.5. mil stylus--Note that I said "ripped with," not "by."  I'm sure this splendid new stylus is doing no damage to my shellacs.  And I've always wanted to type "my shellacs."

So, you get eleven chances to hear the great work my Rek-o-Cut 3.5 mil elliptical 78 stylus is doing--eleven 78s: three electrics and eight acoustic(al)s.  The problem children in this playlist include the Original Dixieland Jass Band's 1917 Indiana, Earl Fuller's Cold Turkey, and the Associated Glee Clubs of America's The Bells of St. Mary's.  Each presents its own restoration challenge--Bells of St. Mary's because, without treatment, the (1,000-plus!) voices sound remote and tinny; with the new stylus, I achieved a full sound I didn't think was possible.  (Dig the up and down volume on this--someone was adjusting the input throughout.)  Cold Turkey, because I'm used to hearing it as a blob of faraway sound blanketed in hiss--the 3.5 mil needle gives it a clarity that I love.  (And I just know you'll love it, too.)  And with Indiana, getting the instruments to sing separately, and the lower frequencies to sound out in a clear fashion, is not easy.  I've gotten some nice results with this side using my conventional (2.7 mil) needle, but the whole-groove tracking of my new needle removes any and all sonic mud.

Whole-groove tracking.  I wonder if that gives a Google match?  (Type, type)  Nope.

The ODJB is magnificent, as ever, and the marching band sides (Columbia Band, Conway's) feature very deft handling of ragtime rhythms--these performances don't sound stilted and stodgy, as record-collecting lore would have it.  Precisely-counted figures are just what ragtime needs, anyway.  No one asked me, but that's my take.  And (W.C.) Handy's Orchestra is fabulous on a Maple Leaf Rag rip-off called Fuzzy Wuzzy Rag, and this is by far the cleanest sound I've gotten from this 1917 disc.

We close in style with two fine 1927 polka records.

To the 78s: The Skyscraper


Posted by Lee Hartsfeld at 9:05 PM No comments:

The D5135EJ Rek-O-Kut 3.5 mil, elliptical, 78/transcription stylus isn't cheap at $150, but we can hardly expect such a non-mass-produced audio item to come cheap.  Anyway, my Victor and Columbia acoustical sides have a vivid, full-bodied quality that make the old results sound sad.  I was half-afraid the 3.5 mil size would be too large for ordinary, non-transcription 78s, but it's proving to be just right.

I've been ripping tracks like crazy, and before long I'll have some up.  At the moment, I'm putting together a Joseph C. Smith playlist--he's the orchestra leader who just got a 2-CD set on Archeophone.  I'll also be putting up MY(P)WHAE regular Earl Fuller, who, far as I know, has yet to get a CD, save for his frenetic jazz sides, none of which I find interesting.  His regular dance sides on Columbia, however, are priceless artifacts.  Ironically, they're more legitimately jazzy than any of Fuller's ODJB-style attempts.

Meanwhile, this is not my player, nor would I use such a player, but it's very neat-looking.  Reminds me of those cool suitcase phonographs from grade-school.  It might be one, in fact.  Try not to think about the tracking damage that tonearm would be doing after a couple swipes.... 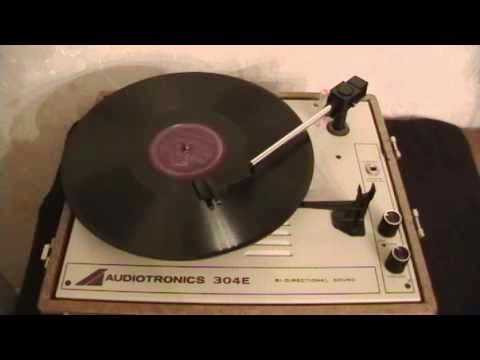 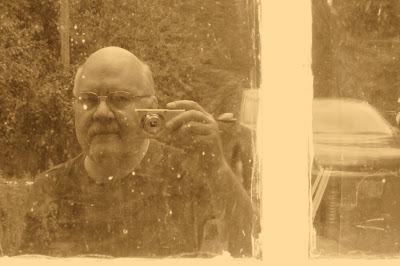 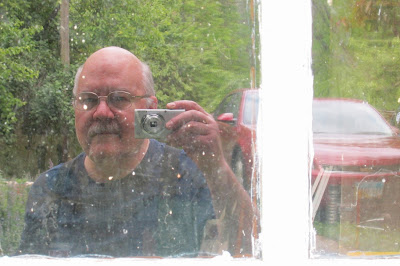 Your blogger (in stereo) at 59.  It happened yesterday (May 22nd).  I was minding my own business being 58, and, the next thing I knew, the last digit ticked up.

Meanwhile, we have a new cat.  He's a barn cat who would prefer to be with us and our cats, and we're happy to have him.  He's getting more trusting by the day.  A few of our male cats have issues with his being here, but hopefully they'll get over it.  There's nothing like the new-Tom-in-the-yard challenging ritual.  He's unneutered but very gentle--he's not initiating the "Reeawwwrrrr!" festivals.  Some Toms show up and try to take over, but not him. 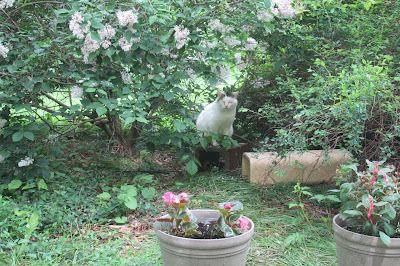 And Tommy, who is indifferent to the presence of our newbie, says "Hi!" 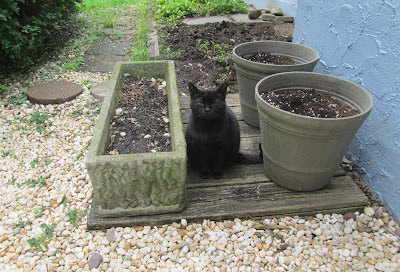