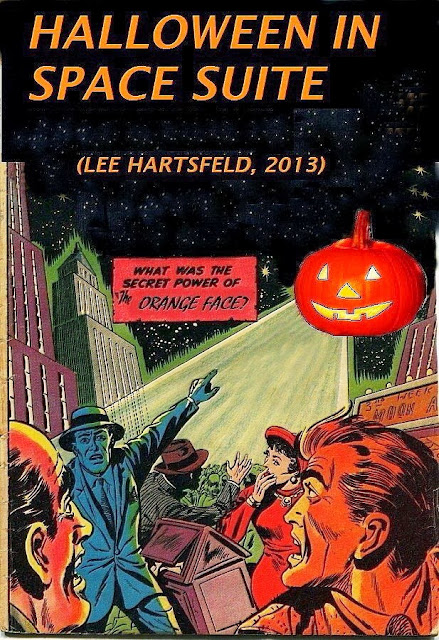 For the art, I used my favorite Charlton Comics cover of all time (Mysteries of Unexplored Worlds, #13, 1959, Bill Molno), slightly modified by me.  Since this is not a political blog, I didn't use am image of the Speaker of the House ("Orange Face").

Anyway, with Halloween nearly here, I thought we'd take a return trip to my Halloween in Space Suite, which was mostly recorded "live" on my marvelous Casio WK-3800, albeit multi-tracked (which I refer to as live-live-live-live, etc.).  By "live," I mean I'm playing in real time--no MIDI, no step time, no tempo adjusting.  I took the hard route--no MIDI cheating for me, except for a portion of the section called "Meteors" with two !!'s.

I'm pleased by how smooth, ordered, and premeditated the sections sound, because they didn't happen that way, except for "Peacocks," which came together in 30 minutes or so after I scrapped my original idea for it.  The chord in "Memories"--i.e., the chord form (C#, F#, B, F, Bb, Eb)--is straight out of Erik Satie, c. 1894. (Two perfect fourth chords, a tritone apart, played as one.)  Yet, by 2013 standards, it sounds jazzy.  Everything in music is context, I guess.

I think my suite nicely shows off the terrific tones to be found on the Casio WK-3800.  In synth circles, the name "Casio" is synonymous with "junk" (or with even stronger four-letter designations), but the 3800 begs to differ.

Hope you enjoy.  More Halloween coming up, and this year's theme is dinosaurs.  Are.  Whatever.  Remember, though, that I can't put up any of my usual Halloween "slaylists," for which you can thank the copyright cops, those lovable lugs who can't handle the notion of us common rabble trading the very music our patronage made possible in the first place.  We are consumers, not owners, even if the stuff we want to post was old hat by the time our parents were courting.  Know your place?  I hope so.

Composed and played in 2013 by Lee Hartsfeld on his Casio WK-3800, with assistance from Sonar X2 Essential and Magix Audio Cleaning Lab MX.

Does anyone know if Flickr is still living?  Was it ever living?  Are the site owners under the impression that eight minutes is an acceptable window for a page of images to show up?  Are their servers from 1782?

I checked other sites, and they're operating, so this isn't my ISP or PC.

When a site becomes a matter of waiting two hours to see if the page loaded, I think it's time for that site to declare itself no more and pull the plug.  Hm.  Maybe they have but didn't tell anyone?