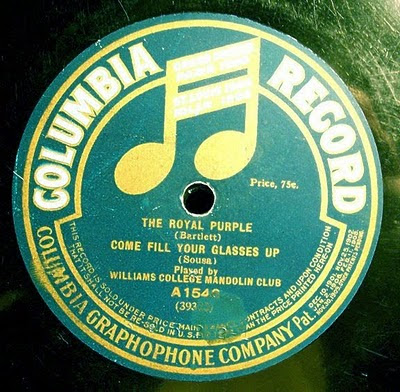 I managed to get two decent label shots out of several--I chose this because it's closer to the label's actual color. It's aqua, but it refuses to come out that way. But this is not important. (Note: Improved hue courtesy of Bob, who tweaked things much closer to the actual color.)

What is important is the incredible performance we're about to hear--a two-selection medley by the Williams College Mandolin Club, 1914. The second strain, taken from Sousa's Corcoran Cadets March, breaks loose into plantation-orchestra territory, with a busy drum backing and (I swear) at least one banjo in the mix. I eagerly await listener feedback, since it's often hard to tell exactly what instrumental line-up you're hearing on an acoustical recording, especially one as casually recorded as this.

"Purely African-American," I decided on my first listen. Sure enough, though the Williams College Mandolin Club was very likely without a black participant, what we're hearing here seems to be imitation-African-American, as black mandolin clubs are described in Lynn Abbott and Doug Seroff's Out of Sight: The Rise of African American Popular Music, 1889-1895.

An initial check suggests that discs like this are rare as hen's teeth. Mandolins show up a lot on 78, but not mandolin clubs. This specific type of string band, from the looks of it, was way under-documented.

This 78 was included for free with an eBay purchase--the dealer figured I'd like it. I like it.

Oh, and dig the talking at the close of the disc--the last three words almost sound like "...carry the backbeat," though I doubt I'm hearing it correctly. Needless to say, the chatter was unintentional.

To the amazing music: The Royal Purple--Come Fill Your Glasses--Williams College Mandolin Club, 1914.