The cats are all very thrilled for me. Here's Elvis: 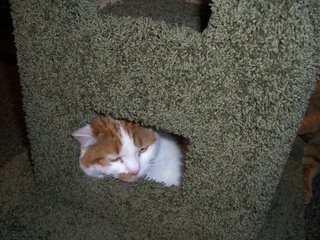 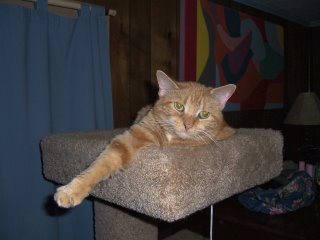 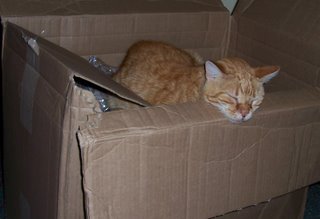 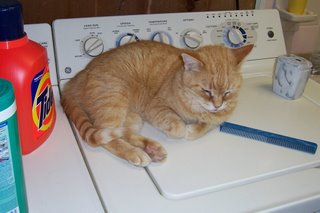 As you can see, these guys couldn't be more excited.

Nice to have a four followed by five zeros, but the zero in "0 Comments" has me wondering if I suddenly lost any following. It makes for a puzzling contrast, the five zeros versus one. So, I'm a bit down, frankly. Which is a sign I need to take a vacation. I'll be back. Many thanks to those who have commented, but I need to figure out if these high numbers ultimately mean very much....

How to double your visits in the space of hours

Wow--234,000+ visits recorded on my counter. Far out. And the Bell file has been downloaded 1723 times. I just wrote Box.net to see if I can upgrade (in order to expand bandwidth).

And if "Jeremiah Johnson" could e- me in regard to putting my files up on a torrent--what that means, how to do it, etc., I'd be much obliged.

Back to the real (non-cyber) world, I need to cut grass after taking care of some, shall we say, cat products inside the house. Products that were deposited where we'd prefer they not be. You've seen those "color outside the lines" car ads. Well, apparently, they have a "poop outside the box" equivalent for cats. No more TV for the cats....

In other news, I'm experimenting with a new EQ (well, several of them), and the results please me. Let me know what you think. The Whiteman file has some bursts of sound in the tom-tom as a result of too much input, but overall I think it sounds great. The Kelly Harrell (great 1926 country) is pretty worn, but I think I triumphed over the surface noise. More to come, but Box.net is a little sluggish at the moment:

The flip of New River Train is Rovin' Gambler, and the lyrics include a familiar line: "I hear the train a'comin'...." I'll have it up later today, but for now I hear the grass a-growin'. Better get (achoo!) out there.

Just to let everyone know, my Box.net bandwidth is running out fast, probably due to my Bell flexi-disc file and no. of downloads thereof--I'll have to check transfer info at the site, if I can remember how to do so. There's an option that tells me # of downloads, anyway.

I hope nothing is draining my bandwidth beyond that!!

But just to let you know, because when the bandwidth is depleted, no more downloads for the month. (Lady Domi will probably note, "So, how is that a new situation?") Yes, when my files aren't migrating and/or simply refusing to show up, they're depleted. Life gets you coming and going. However, this month is nearly done, and my bandwidth renews with May.

However, I'll have to figure out why I've experienced this sudden, drastic loss. A hole in cyberspace, possibly.

In other news, Ben correctly guessed the model for my Birdcall Invention. Congratulations! His prize is knowing that he gave the correct answer. (This is a low-rent blog, you know.... )

Anyhow, something tells me my bandwidth will be kaput by sundown.

I'm going to try to get good digital images of the flexi-disc notes. Since I don't have a scanner, I might photograph each column separately to make the letters large enough to read. Which always helps. If I use a tripod, the images should be blow-up-able without detail loss.

I know it can be done, as I once took a tripod shot of a sheet music cover and was able to magnify a single letter to the point that the texture of the ink and paper were on display. Blew my mind.... 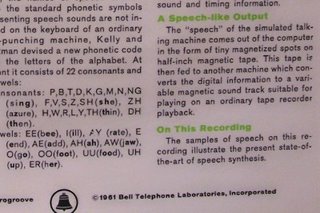 And here's a closer view of the "punched" card pictured on front. Interesting (see right side): "Military Manufacturing Information Dept." Maybe that's a clue to the kind of publication this came from? I.e., a military periodical, maybe? 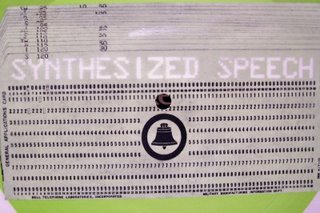 "Tear out and play" says the upper r.h. corner, so it was definitely included in a periodical. I asked the dealer, but she had no idea where it came from. Dang it. Not a phone book, I'm sure.

Spookiest of all, and I swear this is true--I also purchased this 1990 CD, unaware of its historical connection to the flexi-disc. I'm not making this up! 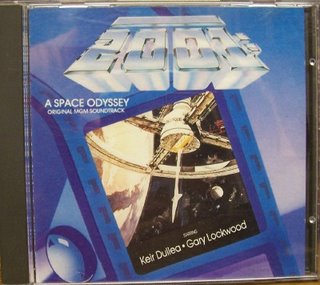 What are the odds that this CD would have been part of the same purchase? Obviously, extraterrestrial forces guided my actions in the store.

Very, very strange. Also odd is that CBS Records would have put out an MGM soundtrack, but it's O.K. by me. I paid $4 for it, by the way. I forgot to ask if they had any monoliths sitting around....

Scene: a junk shop on the east side of town. Your blogger is waiting for the owner to name a price for a sound recording he found in the back in a box he wasn't supposed to go through (he hadn't known that, though). The dealer is going through every possible word combination on eBay in the hopes of finding a listing (and a price), though by now it's obvious there isn't one. Still, she searches. And searches. Lee correctly figures that she's stalling. Finally--"What's it worth to you?"

I'm willing to pay ten bucks. "Five dollars," I reply. "Ten, and it's yours." "O.K." Deal done. (I hate mind-reading dealers! Just kidding--she was quite cool. And savvy.)

And what a record. A magazine-insert 33 1/3 with three bands, lasting all of two minutes, and cooler than heck: 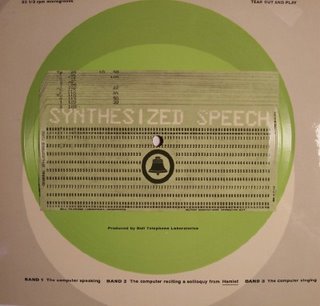 So, here's the scoop: a longer version of this Bell Telephone Laboratories record was released in 1963 on a 7" 45. Which, I found out by Googling, can be heard at Otis Fodder's 365 Days Project. (Under "Computer Speech")

However.... My magazine-insert record is from 1961. So there. And it seems to have a different narrator.

Explains the back of the insert: "The samples of speech on this recording were produced by an electronic digital computer. They are a by-product of a research project at Bell Telephone Laboratories to obtain a better understanding of the nature of speech."

"Each speech sound is specified on a separate punched card," it continues. A series of cards are fed into a "high-speed, general purpose computer," and the synthesized speech is recorded onto half-inch magnetic tape, after which the tape "is fed to another machine which converts the digital information to a variable magnetic sound track suitable for playing on an ordinary tape recorder playback." See? Simple as pie.

Well, I think, anyway. And it's possible I have a less common version of an already uncommon record. Whatever. It's cool. I daresay, it's HAL-acious.

I hope you en-joyed that re-cord.

Um.... Feel free to comment. I don't bite! (Or nip. Or scratch. Unlike some cats I can name.) Let me hear from you. About anything. Such as how incredibly cute Tucker is in the yellow wagon, his tongue sticking out. He lost his teeth at a young age (everyone in his extended family of strays have/had dental issues) and that's why his kitty tongue, often as not, is on display. He's the sweetest cat who ever lived, by the way. He's one of two official greeters--cats who welcome newcomers into the brood while others are busy hissing, swatting, and otherwise acting like jerks.

Scheduled outage at 4PM PDT. I keep forgetting what time that is in our zone. 7 PM or 8 PM. One of the two. Lots of scheduled outings lately. I'm getting paranoid.

Journey Into Space, Frank Weir's Saxophone and Orchestra, 1955. From London 45.

Rock the Joint, Jimmy Preston and His Prestonians, 1949.

Little Joe from Chicago, Andy Kirk and His Clouds of Joy, 1957. From RCA Victor LP.

Annnnnnd... it looks like Boxnet is not functioning. Oh, splendid.

Let's celebrate with some 78s, starting with possibly my favorite Paul Whiteman side ever (if I absolutely had to pick just one). I've featured this before, but I think I got a better file this time around. Arranged by the great Ferde (Grand Canyon Suite) Grofe. The instrumentation, the vocal harmonies in the choral refrain, and so on, are to die for:

The flip is almost the same arrangement, save for the fact that it's a different tune. That's where the analogy falls apart:

Jazz historians have made such a point of putting down Ted Lewis' earliest stuff (especially his playing on it) that collectors are amazed when they hear a good early Lewis. Well, we're about to hear a great early Lewis:

I can't believe I got a decent file from that side, but I did. You should see the surface wear--and the crosscuts, a couple of which remain audible. But who knows when, or if, I'll see another copy. And, so, I saved the sound.

We close with a 1917 Earl Fuller gem, Ida! Sweet as Apple Cider. Lots of wear on this one, too, but the details shine through--such as the terrific xylophone playing. I can't think of any cider puns:

Wait, I know--we've already heard the other sider. In a previous post. Ha, ha!

After that joke, it would serve me right if the site counter started reversing....

Lee
Posted by Lee Hartsfeld at 2:16 AM 2 comments: