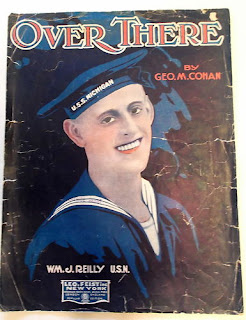 Two more selections for today, and I'll try not to complain about Windstream in this post, especially considering the fact that Zippyshare is now, for some reason, working.

I think the last time I featured Ferde Grofe's wonderful c. 1929 Over There Fantasie was in 2013.  Not sure, since I long ago purged most of this blog's history (too many "dead" links), but here it is again, and in something we don't hear a lot of at this blog: stereo.  I've coupled it with a highly enjoyable and inspiring version of William Billing's Revolutionary War anthem Chester, arranged by United States Army Band leader and commanding officer Colonel Samuel Loboda.  It includes a 21-gun salute (just to let you know). 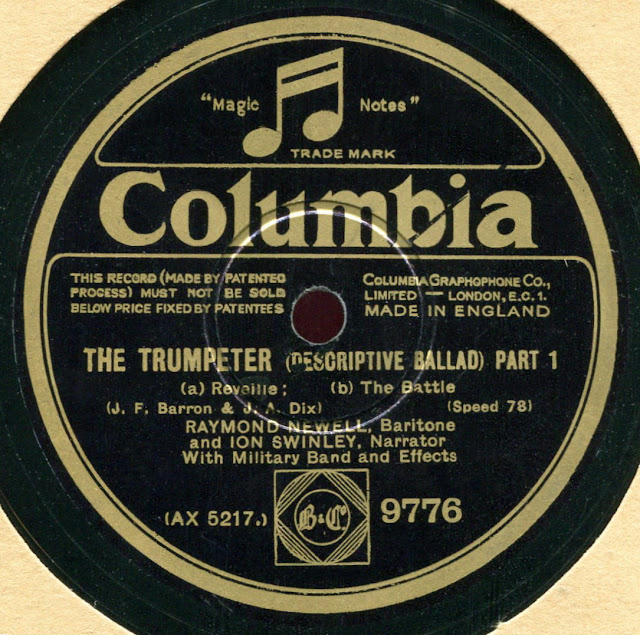 I can no longer use Zippyshare--I try to upload, and nothing happens.  I imagine it's our sick and sorry excuse for internet service (the joke known as Windstream DSL).  So Box.net my uploads will have to be, unless and until I get around to enjoying the experience of staring helplessly at an upload that refuses to happen.

You who enjoy an actual internet connection have no idea how unbelievably lucky you are.  And, yes, they actually bill us for ours.

The Trumpeter--Raymond Newell, Baritone; Ion Swinley, Narrator, 1929.
Your Land and My Land (Romberg, A: Grofe)--Paul Whiteman and His Orch., w. vocal refrain, 1927.
March for Americans (Grofe)--Meredith Willson and His Orch., 1941.

Lee
Posted by Lee Hartsfeld at 1:47 AM 4 comments: 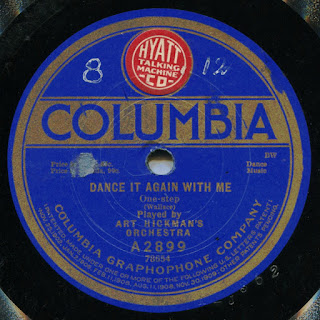 Acoustical gems, spanning the years 1903 to 1920.  A number have been featured here before, but not sounding as good, because 1) I'm using Vinylstudio and 2) I'm using a bass turnover of 0 Hz and a 10kHz treble rolloff of 0 dB.  The result is clear, crisp, clean acoustical sound.

You'll think you're right there, hearing the musicians play in person.  Well, not really, but the sound is quite good.  Download without delay for some 97- to 114-year-old sound!

Click here to hear:  Dance It Again with Me

Lee
Posted by Lee Hartsfeld at 1:42 AM 2 comments:

Cheap label country of the 1950s 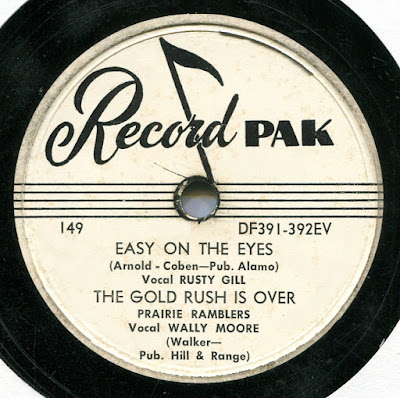 And we mean cheap.  How cheap, you ask?  Record Pak-cheap, that's how cheap.  Plus, Tops-, Allegro-, and Variety-cheap.  These are the pop and country labels you ended up with if you weren't willing or able to spring for the name outfits and artists.  Cheap as cheap can be.  And lots of fun.

Most of these rips sound decent enough, with the exception of a couple tracks from the Record Pak 78, which I suspect was played with a Stone Age tonearm.  An extra-wide needle and heavier tracking force can only do so much for such a battered platter, but the tracks are great fun.  (Did I mention fun?)

From 78s (and a 45) from my collection.
DOWNLOAD: Cheap Label Country

Lee
Posted by Lee Hartsfeld at 3:12 AM 9 comments:

Whittemore and Lowe--"Pop Hits on Two Pianos," plus bonus tracks 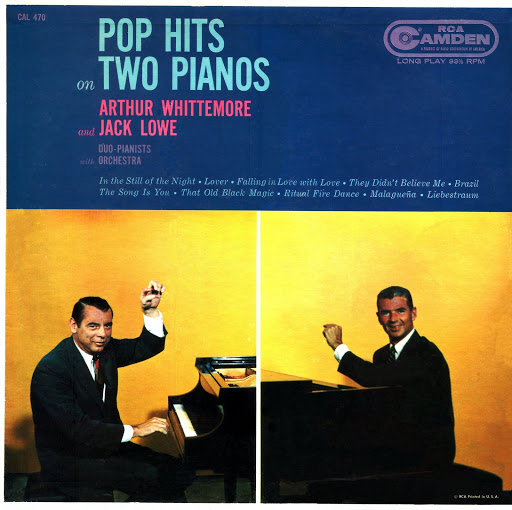 The 1959 RCA Camden LP, Pop Hits on Two Pianos (above), reissues nine of the ten tracks from the 1946 Whittemore and Lowe 78 set Two Grand. which RCA had the duo pianists redo, under the same title, in 1956, possibly having decided it wasn't grand enough.  Anyway, the Camden LP omits The Continental, so I ripped it from my 78 copy and inserted it as a bonus track, because I'm like that.

In addition, from shellac in my collection, we have two 1948 orchestra-less sides, plus two 1951 prepared-piano numbers that also qualify as "tape music," given the tape effects therein (quick splices, delay, possibly some speed manipulation), so you can't say without fear of rebuttal that I've scrimped on the Whittemore and Lowe.  By the way, Ernie was the person who brought the prepared piano sides to my attention a while back.  Thanks, Ernie.

Arthur and Jack were kind of a less flamboyant Ferrante and Teicher, and they were first.  Like F&T, they did light classics, pop standards, Broadway, and even country, but in a more laid-back way.

(With orchestra conducted by Russ Case, 1946)

(Without Orchestra; dates courtesy of Buster)