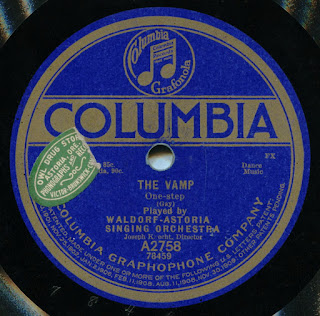 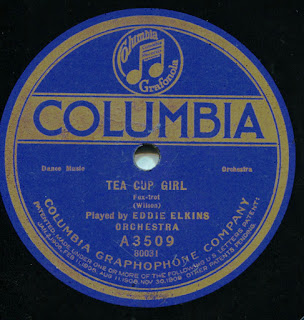 So, I just discovered something about my Magix program that I didn't know: it exports individual WAV files as mp3s.  Previous versions didn't do this, and I swear I tried it with this version and nothing worked.  That's very possibly because my previous PC was an all-in-one model, which pretty much means a laptop.  There are all sorts of things it wouldn't do.  (Or, rather, couldn't do.  I can't ascribe intention to a machine, though I do, anyway.)

Now I have lightning-fast WAV to mp3 conversion.  You can't know how much easier this makes life.  I am very pleased.

And I hope you'll be very pleased by today's dance band 78s, most of them from the early 1920s, and ripped with care and skill by your blogger (he thinks so, anyway).  Lots of fascinating changes happening in dance music of the late 1910s and early 1920s, not the least of which is the fairly sudden appearance of four-beat pulses (thanks, in large part, to the banjoists' time-keeping) versus the usual two-beat.  The tracks to listen for in that regard: Ruby, Birdie, My Sunny Tennessee, and Who'll Be the Next One.  None of these swings in the 4/4 style of 1932 Duke Ellington, but they're an important evolution beyond the (as much as I love them) one-steps and slow fox-trots of Joseph C. Smith and others.  There's just a whole new rhythmic feel in these particular sides--smooth and streamlined, swingier.

On the other hand, though not four-beat in feel, the Waldorf-Astoria Orch.'s lightning fast one-step on The Vamp is unusually potent, so maybe I'm underestimating the power of 2/2.  Just don't try to make out the bizarre and clunky lyrics--it's not worth the effort, and it distracts from the (for its time) progressive arrangement.  Waldorf-Astoria leader Joseph Knecht, born in 1864 in Austria, is better known for his fabulous B.F. Goodrich Silvertown Cord Orch. recordings on Victor.

And yes, you're hearing Puccini in The Vamp chorus.

The Kentucky Serenaders' 1920 Venetian Moon, after a sluggish start, gets nice and swingy, and two familiar strains pop up: the one used by Elvis Presley on Surrender, and a tune that sounds uncannily like the first half of the huge 1922 hit, Hot Lips.  And if you think you're hearing Tchaikovsky in Where the Volga Flows, you are correct.  And that's a bit from Rachmaninoff's C-sharp minor prelude at the end, possibly the most quoted piece of the early 1920s.

To the music:  Tea Cup Girl, The Vamp, more! 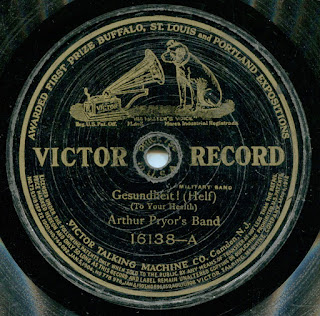 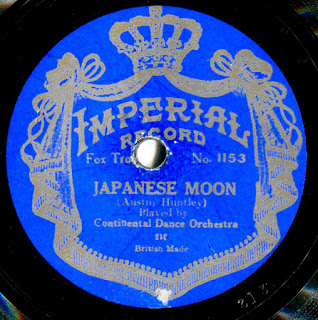 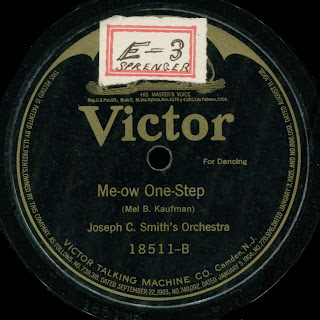 A playlist of mostly novelty 78s--some of my favorites from my overflowing collection.  Two of out titles--Me-ow and Taxi--are by novelty master Mel B. Kaufman, who also wrote More Candy, Muslin Rag, Umbrellas to Mend, Ouch! and Step on It.  Oddly enough, he did not write Gesundheit!, our last selection--its author was J. Fred Helf, who--wouldn't you know it--has a Wikipedia entry.

Hezekiah was written by Don Richardson, and of course I'm dying to know whether or not he's the Don Richardson who made country fiddle recordings for Columbia.  I wouldn't be surprised--he was a versatile guy.

The orchestra on Japanese Moon is led by Nathan Glantz, but the British label credits the Continental Dance Orchestra.  Which is fine, because the Imperial Record label can credit whoever it wants, I suppose.  Speaking of labels, I almost gave up on fixing the scan for this one--only when I hiked up the saturation did I get the proper light-hitting-the-label-from-the-side effect I was seeking.  Otherwise, the label is barely readable.  But it's an awesome design, so I tried a multitude of effects until I got it right.  Thank you, PhotoPad Image Editor.

Oh, and the Gorman of "Gorman's Novelty Syncopators" is the justly famous Ross Gorman (think Paul Whiteman Orch., Rhapsody in Blue).  Very fun side, and you have to wonder--is this the first fade-out ending ever recorded?  (Probably not.)

At what other blog are you going to find a zip file titled "Gesundheit!--VA"?  I pride myself on such things.

To the sounds: Gesundheit!--VA (Various Artists) 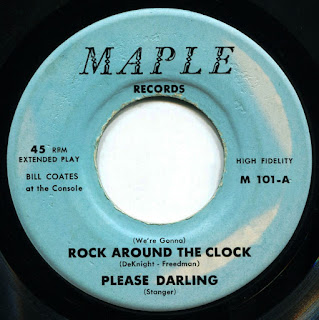 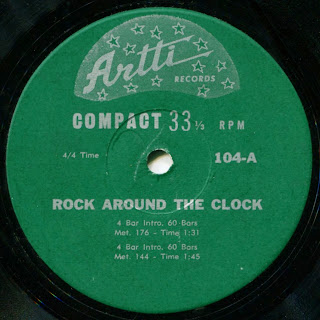 Two "authentic" Rock Around the Clock versions--and I use quotes because neither of them sticks completely to the song as originally written.  But they're close enough.

Last post, I wrote about how the originally published version of RATC differs in significant ways from most of the recorded versions, including Haley's.  Music scholars have been passionately discussing this fact in great detail for many centuries--which is funny, since RATC is only decades old.  Anyway, I said that the chorus starts with mi, fa, sol, when in fact it starts with do, re, mi (I checked the original sheet music version).  I apologize for any confusion or controversy this may have caused.

Last time, I linked to a recording of Artie Malvin's 1955 Waldorf Music Hall version of RATC, which, despite starting with mi, fa, sol on the chorus, is close enough to rate as "authentic."

Today, three more mostly authentic versions of RATC: 1) a dance-class recording in two different tempos, 2) a polka (!), 3) an organ version on the never-heard-of-it-before Maple Records label.  The organ version includes the minor-mode verse, and it maintains a tick-tock rhythm throughout, so, out of all the versions I've heard, it's probably the closest thing to the song as written.  Would the song have gone anywhere without Haley's Rock The Joint-style reworking?  Probably not, seeing as how Haley's version, without the help of Blackboard Jungle, may never have become more than a minor hit.

The polka version, because it's a polka, includes strains unrelated to RATC, but it does feature the verse in minor mode, AND it gets the melody right.  And it polkas out like crazy!  At MY(P)WHAE, polkas get respect.

To the music: Authentic RATC versions 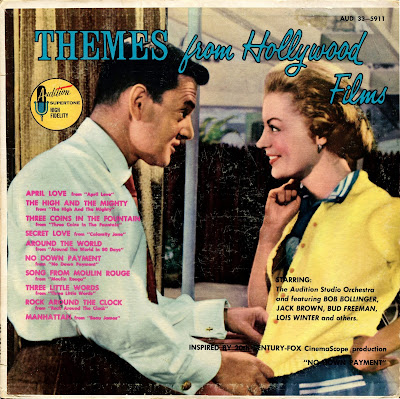 Themes from Hollywood Films (1957?) was your usual cheap-label "theme" LP--namely, a carelessly tossed together collection of whatever previously released tracks happened to satisfy the title.  The cover consisted of a still from a current movie (in this case, 1957's No Down Payment)--a ploy intended to conceal the fact that 1) most of the tracks weren't recent, and 2) none were from actual soundtracks.

How did Tony Randall and Sheree North feel about showing up on this cover?  Did they even know they were on it?  The answer is lost is the mists of Newsweek.  I mean, Time.

Anyway, I bought this LP because it contains Rock Around the Clock, which I figured would be the version by the Waldorf Music Hall label's Artie Malvin, who had sung for Glenn Miller in an earlier era.  I figured this because Audition is an Enoch Light label.  But I had to be sure.  Well, I was right--it's Malvin.  I was sort of hoping it would be an instrumental, but no such luck.  Note that the cover cites the 1956 Rock Around the Clock movie instead of the film that made the song such a huge hit--i.e., 1955's Blackboard Jungle.

The Malvin version is interesting because it is one of a small number of Clock recordings which presents the song as originally written (as opposed to Bill Haley's 1954 reworking), meaning that the verse ("One, two, three o'clock, four o'clock rock....") is in minor mode, and that the chorus starts out mi, fa, sol instead of do, mi, sol, like we're used to.  It means that Enoch Light and Malvin were working from the sheet music, not copying Haley's Louis Jordan-esque recording.  Most, if not all, of the other cheap-label knock-offs of the day imitated Haley--even, in a couple of instances, down to the tricky Danny Cedrone guitar solo.  (Check out Jack Richard's Broadway label version.)

Also interesting: Instead of (We're Gonna) Rock Around the Clock, the label reads, "We Gonna": 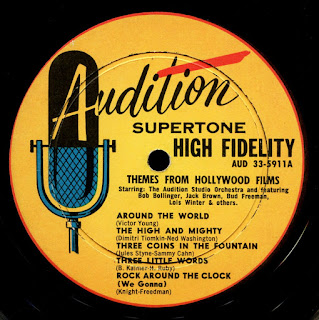 And this is why I collect records--for exciting, hold-the-phone discoveries like this one.  I'd post the track, but the tune's a tad too famous.  Artie's version is not at YouTube--I checked.  Yes, it's on YouTube: RATC.  Thanks, DonHo57!