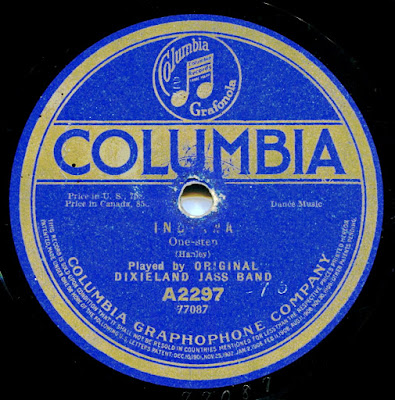 Anyway, over at Buster's blog, we learn that the ODJB is nearing its 100th anniversary, first-recording-wise.  For the occasion, Buster remastered an RCA EP featuring four ODJB Victor sides--their first, second, fourth, and fifth--and he got it sounding quite good.

The Original Dixieland Jass/zz Band being one of my all time favorite outfits, I just had to join in the celebration, so here are the ODJB's two Columbia label sides from May, 1917--and there's a fun urban legend behind them.  As I heard it at the Gramophone Emporium (now closed) in Edinburgh, Scotland back around 1980, the ODJB auditioned at Columbia (true), and cut two sides (true).  The Columbia engineers had never heard music so strange and hilarious, so they spent the session rolling on the floor in laughter (as far as I know, false).  Hence, the bad sound on the recording (not true--it's very well recorded for 1917).

For decades, collectors thought the two ODJB sides you're going to hear--Indiana and Darktown Strutters' Ball--were the rejected Columbia test sides, but no.  They came after the group's first batch of Victor sides, not before.  Nothing punctures a good urban legend like reality, but a cool story, anyway!

To add to the fun, I give you three more Columbia jazz sides--Way Down Yonder in New Orleans by the masterful Georgians, a subset of the Phil Specht Orchestra; and two sides from Columbia's best jazz bandleader, Wilbur Sweatman--1919's That's Got 'Em and A Good Man Is Hard to Find.  Early in his career, Duke Ellington played with Sweatman.  But not on these sides.  They're awesome, regardless, especially the first title, a riff-laden jam tune and, in my judgment, an ancestor of the gospel-style, solo-dominated jams of the big band era.  Which, in turn, became the stay-on-the-tonic-and-honk-the-saxophone early rock'n'roll numbers of Hal Singer, et al. beginning in the mid-1940s. Give the Sweatman sides some longer solos (as opposed to the one-measure figures that show up throughout), and you'd have had big band.

To my ODJB tribute:  Indiana 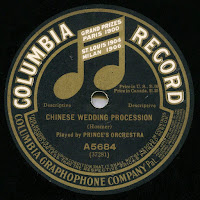 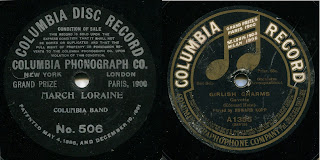 Labels, we've got labels.  And discs to go with 'em, too.

And since I'm showing labels, here's the back of number four:

I should've named this post after the Columbia Band, which shows up in nearly half of these, and sounding good.

Gorgeous stuff, some of which has seen the light of blog before, but never sounding this beautifully inverse-RIAA'd.  We have raggy marches, orchestra bell solos, clock pieces, and more.  You'll be earlied-out when all of this is done, but we all need to get drunk on the past once in a while. Cheaper than beer.

I love the way the announcement for March Lorraine sounds more like "Ach! Torraine!" or something.  On early, early discs, the first several grooves were often the ones most shredded by tracking error, which meant the announcement ended up a garbled, scratchy tragedy.  But... the announcement to 1901's Good Bye, Dolly Gray is nearly all there, sound-wise, so we have that to be thankful for.  Great sounds--and, owing to their age, very, very early! 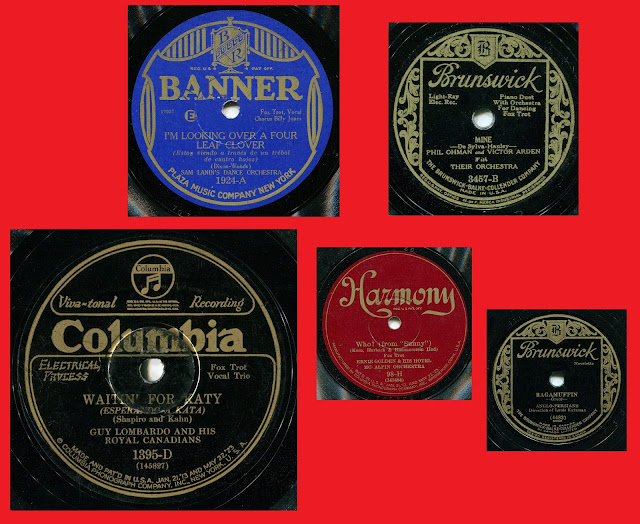 To go with Ferde Grofe's jazzy concert piece, Metropolis (previous post), here are fourteen Jazz Age gems.  Well, to be fair, Peter DeRose's Deep Purple, while an example of "symphonic jazz," falls outside of the Jazz Age window, but it nevertheless has much in common with the 1928 Metropolis, though I imagine most people would hear Gershwin (which is not unreasonable).

And there's the superb novelty side, Ragamuffin, by Louis Katzman's Anglo-Persians, one of the most charming numbers of its type, and there's Jean Goldkette's 1927 I'd Rather Be the Girl in Your Arms, sung by (wait a minute)... Frank Bessinger?  Whoa.  What's up with that?  Actually, male vocalists singing songs with female lyrics (so to speak) wasn't unknown in the Jazz Age--I have a male vocal refrain on a recording of The Man I Love (Troubadours, maybe?), for instance.  Back then, lyrics were lyrics, I guess.  The tradition didn't last, of course.  Good thing--imagine Rosemary Clooney singing 16 Tons.

Jean Goldkette's famous Sunday (famous because Bix Beiderbecke is on it), features the Keller Sisters and Lynch, and I love "the Keller Sisters and Lynch."  The sound of it, I mean.  Their vocal sound is pretty cool, too.  And Red Nichols--ahh, yes. My introduction to the 1920s.  I grew up listening to my dad's Brunswick 78 set of Red Nichols on the Garrard hi-fi, and my dad instisted Red wasn't real jazz (too studio-perfect?).  Well, I thought he was, and I still do.  Awesome stuff.  He is too often regarded as a Bix Beiderbecke sound-alike, but when I listen to Red, I hear Red.

The wonderful Deep Purple, more famous as a song than a concert piece, was arranged by... dunno.  I'm guessing Ferde Grofe or Roy Bargy.  Grofe had left Whiteman by 1934, but he was still writing arrangements, so it could be him.  It's certainly in his style. 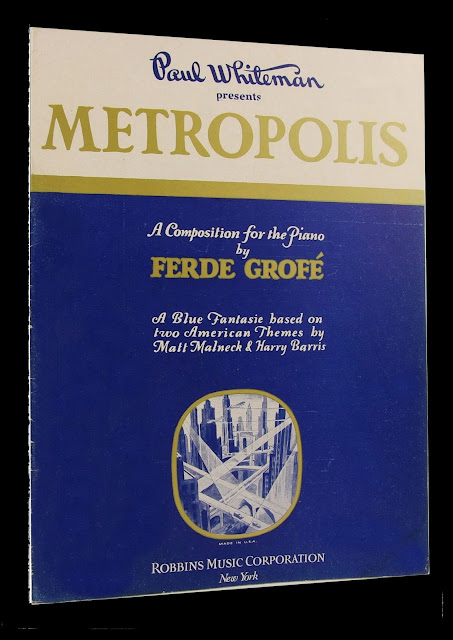 Anyway, Metropolis is sort of famous as an allegedly botched attempt at concert jazz, despite the fact that 1) it works just fine in that regard, if you ask me, and 2) until 1989 (with Willem Breuker Kollektief's amazing version) the 1928 Whiteman disc was its sole recording.  What has kept Metropolis a topic of jazz and Classical discussion is, as always, Grofe's connection to Gershwin as the orchestrator of Rhapsody in Blue--that, plus his rather unfair reputation as the guy who did the crappy commercial charts for Paul Whiteman while Bill Challis and others were writing progressive stuff.  (Never mind that Challis was a big fan of Ferde.)  Whiteman has caught hell from jazz critics for many decades now--he was fake jazz, didn't swing, yada yada--and Grofe, being his chief arranger, is co-condemned.  Being one of popular music's most gifted innovators doesn't always pay off, at least critically.

Grofe wasn't Gerswhin; he wasn't Challis; he wrote charts for Whiteman; and he hit the Classical big-time with his Grand Canyon Suite, an alleged piece of fluff (derivative fluff, at that).  Not my verdict, but pretty much the standard one until the arrival of...

...the digital age, with Grofe getting some long-overdue nice press, and with an astonishing number of his pieces having seen the light of CD (even his Niagara Falls and Hollywood suites!).  And we have friend-of-MY(P)WAE Kevin Tam resurrecting such Grofe gems as San Francisco Suite and Selections in a Wine Cellar.  I still can't believe all of this is actually happening.

At last, a Grofe discography that extends beyond the Grand Canyon and Mississippi suites.  All it took was the invention of CDs.  Plus, newly-available Grofe scores! 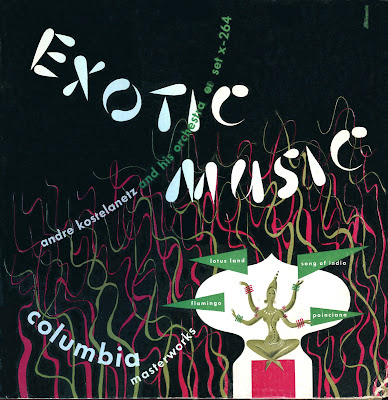 Gorgeous mood music, by the master of same, Russian-born Andre Kostelanetz.  Only four selections in this 12" 78rpm album, but I do not complain, especially when the music is so fine and the outside art so awesome.  (Wore my wrist out cloning out the worn spots on the black background.)

The chief problem with two-disc 78 albums is their increased tendency to crack when mailed, since there are only two records.  Dealers should know to take shellac discs out of an album (left inside, they're free to move around and crack), but "should," plus $1.29, will get you a cup of coffee at McDonald's.  And so I have at least one cracked copy of Exotic Music, but I have another--from where, I don't remember--whose discs are not only whole but, until I put them on my turntable, unplayed.  These are the ones I ripped.  I track heavy, but nothing like the tonearms of old.

The standout track, by far, is the roots-of-exotica selection Lotus Land, composed by Cyril Scott in 1905, and by far his best-known work.  The liner notes are worth quoting:

"Lotus Land finds its story in the Odyssey of Homer.  During the ten years of tribulation which he spent returning from the siege of Troy, Odysseus braved and overcame many perils, some fierce and aggressive, others latent and passive, but just as deadly.  One of these periods awaited him in the land of the Lotus-eaters.  Whoever stopped here and ate of the lotus flower would at once forget all thoughts of home and duty and remain on to live in dreamy indolence.  This peril, successfully defied by Odysseus, is pictured with wonderful realism in this impressionistic music.  The languid, dulled ease, the meaninglessness of time, the fatal beauty of the flower, are all richly embroidered in this tonal tapestry."

Damn--they don't write notes like that anymore.  And it's hard to imagine music that more perfectly describes its subject.  The other three selections, especially Flamingo, also rock.