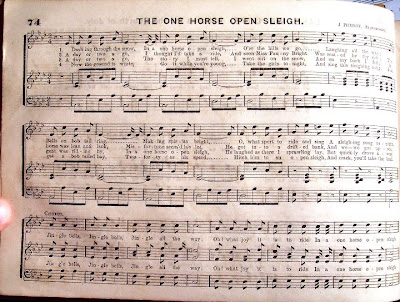 So, I received my eBay copy of the William B. Bradbury tunebook, The Victory (1872 edition), and there on page 74 is James Pierpont's The One Horse Open Sleigh, a.k.a. Jingle Bells. Only with its original melody, which is different in spots from the one we know.

So I put together a recording, with me at the Casio WK-3800 (Patch 071). This is tricky to play, because the tenor part is up top on its own line (and notated an octave up in the treble clef), which makes putting all four voices together a royal pain, since the tenor has to be added to the bass, alto, and soprano, and played an octave lower than written. Therefore, I recorded this four bars at a time and joined the results together. Which is actually less of a hassle than renotating the thing for easier reading.

Except for a couple rushed measures, this came out nicely, I think. Consider it a late Christmas post: