Sunday night gospel: When the Gates of Glory Open, Be a Daniel, Don't You Hear Jerusalem Moan 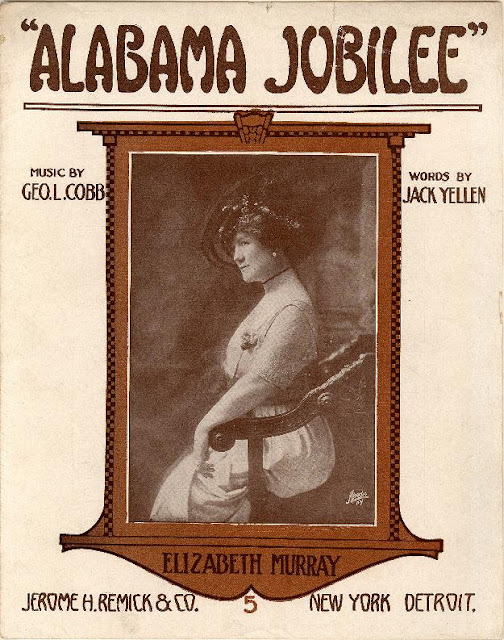 Some great country gospel from the late 1920s, a 1912 recording of Will the Circle Be Unbroken by the Scottish gospel singer William MacEwan, and so much more in today's--er, tonight's--Sunday gospel playlist.

Our opening track--The Deal Family's Be a Daniel, from 1927--is one I'll definitely have to research, because it's not the famous Philip P. Bliss song but another tune and text entirely.  Maybe I have it someplace in my 5,000 hymnals.  (Okay--300.)  A total mystery.  And I love this style of family gospel harmonizing.  Believe it or not, this sort of singing continued into the 1970s, and maybe beyond.

William MacEwan's Will the Circle Be Unbroken (he's "William McEwan" on my American Columbia issues)  appears to be the first-ever recording of this great Charles H. Gabriel gospel number, written in 1907.  A quite popular Scottish gospel singer, MacEwan sang in a style that can only be described as... let's say, the opposite of the Carter Family approach.  William sang with much passion and verve, not to mention enough vibrato for any four vocalists.  I love his over the top approach, though, judging from comments received at earlier MacEwan posts, not everyone may agree.

Onward, Christian Soldiers features a text by Sabine Baring-Gould (1865) and music by Arthur Sullivan (of Gilbert and Sullivan fame, 1871).  You may have heard this one before, someplace.

As for the Gid Tanner two-fer, Don't You Hear Jerusalem Moan and Alabama Jubilee, these two sort of go together, even if Jubilee is hardly known as a religious number.  Jerusalem--a bluegrass standard, but, as far as I know, originally a black spiritual--makes fun of Christian hypocrites (at least in the African-American text), while Jubilee makes fun of black religious (?) gatherings, and in the racist fashion we'd expect from a 1915 hit.  One's the real thing, and the other is a play on the real thing; over time, the two tend to mix in historical memory.  If my copy sounds pretty beat, it's because it is.

And here's a lengthy Wikipedia entry on Phillips Lord, whose 78s sound like those of a radio personality, most likely because he was one.  In some ways, he was the Garrison Keillor of his day.  "Fake home-spun" we could call his genre.  I could, anyway.  And I have a theory that family radio dramas evolved from stage presentations, because, after all, radio in its early days incorporated all types of contemporary entertainment forms (just as TV did in the late 1940s).

And I know nothing about the Bush Brothers, except that they made interesting gospel sides.

Click here to hear: When the Gates of Glory Open

Ripped from 78s in my collection with MAGIX Audio Cleaning Lab MX. 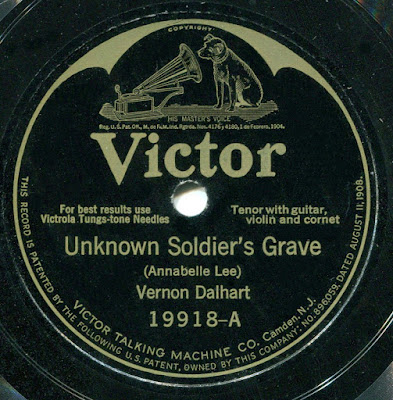 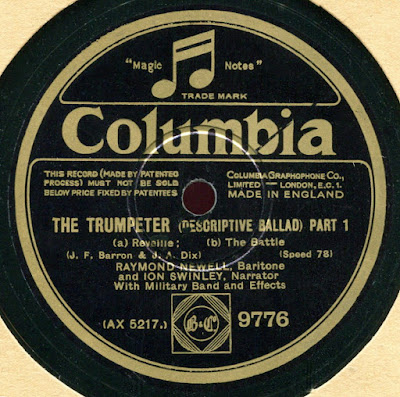 Well, actually, the 78s aren't late--I'm late in posting them.  My apologies to any 78s I might have offended.

Yes, we're coming up on July 4th (at least, the local TV stations are already booming about the local event called Red, White, and Ka-Boom!!--I mean, Boom!!), but it's never too late to honor Memorial Day, and here are two Twenties sides that do so beautifully.  They are Vernon Dalhart's 1925 recording of Unknown Soldier's Grave, and Raymond Newell and Ion Swinley's elaborate 1929 rendition (with sound effects and actors) of the 1904 anti-war art song, The Trumpeter (J. Francis Barron--J. Airlie Dix).

John McCormack did a wonderful Trumpeter recording, too, but I don't have a rip ready.  Reason: it's hiding out of sight someplace in my 12" 78 rows.

Both were ripped with (you guessed it) my new 3.5 mil 78 stylus, and The Trumpet, in particular, benefits from the improved tracking.

(The sections of The Trumpeter are as follows:

a) Reveille
b) The Battle
c) The Roll Call
d) Epilogue)

Posted by Lee Hartsfeld at 6:58 PM No comments: 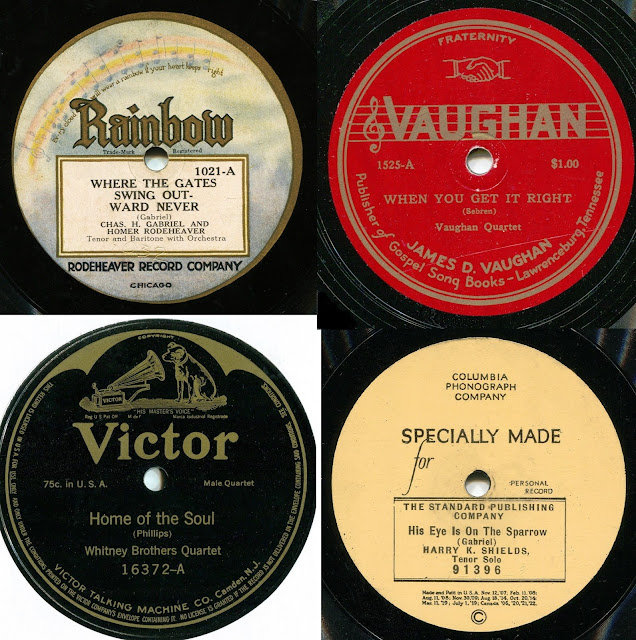 We'll pretend it's Sunday morning--or I will, anyway.  Otherwise, I'd have to title this "Monday a.m. shellac."

Lots of great stuff here, and most of these sides are seeing the light of blog for the first time (my blog, anyway).  And they've all been ripped using my 3.5 mil needle, so they sound great.  Most of them, anyway.  Some were hopeless from the start, like the poorly recorded Vaughan Quartet sides (on the Vaughan label, by the way), the Homer Rodeheaver and Charles Gabriel duet, and....  Hmm.

Well, actually, everything else sounds quite good, old-78-wise.  A note about the Rodeheaver/Gabriel side: Gabriel was the hugely popular gospel songwriter who wrote the music and/or words for Will the Circle Be Unbroken, Higher Ground, and tons more.  The three Gabriel songs in this zip are (The) Glory Song, His Eye Is on the Sparrow, and Where the Gates Swing Outward Never--the last one featuring Gabriel himself.  Unfortunately, the sound quality isn't much, and neither is Gabriel's singing.  He was in his 60s at the time (1922), so maybe his voice hadn't aged well.  But it's cool to hear the man himself.

Philip Phillips' Home of the Soul (1865) was a huge hit in its day and beyond.  I don't know when it fell out of fashion--maybe the 1920s?--but it enjoyed something like a 50-year run as a standard.  Our performance, by the Whitney Brothers, is gorgeous, and the falsetto (semi-falsetto?) lead is amazing and fascinating.  And we get to hear them again on The Light of the World Is Jesus.

You can't go wrong with this Sunday playlist.  If you do, I'll disavow any knowledge of your actions.

Glory Song (Oh, That Will Be Glory for Me) (Chas. H. Gabriel)--Criterion Quartet, 1908
His Eye Is on the Sparrow (Gabriel)--Harry K. Shields, Tenor, poss. 1924
Where the Gates Swing Outward Never (Gabriel)--Charles H. Gabriel and Homer Rodeheaver, 1922
Home of the Soul (Phillips)--Whitney Brothers Quartet, 1909
White Than Snow (Fischer)--Dixie Jubilee Singers, 1925
Let the Lower Lights Be Burning (Bliss)--Dixie Jubilee Singers, 1925
Throw Out the Life-Line--Harry Macdonough and Hayden Quartet, 1911
Love (Callaway)--The Vaughan Quartet, 1927
I Am Praying for You (Cluff-Sankey)--(Frank C.) Stanley and (Henry) Burr, 1909
When You Get It Right (Sebren)--Vaughan Quartet, 1927
He Leadeth Me (Bradbury)--Mr. and Mrs. Wheeler--soprano and tenor duet, 1910
The Light of the World Is Jesus--Whitney Brothers Quartet, 1909