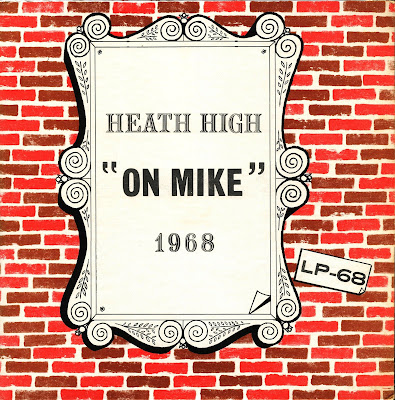 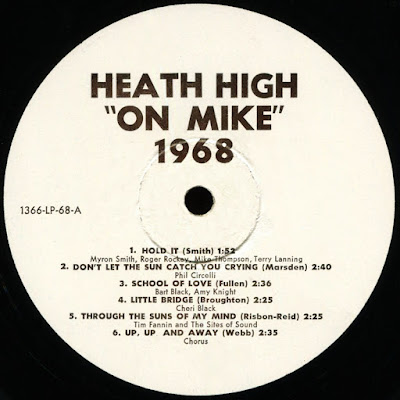 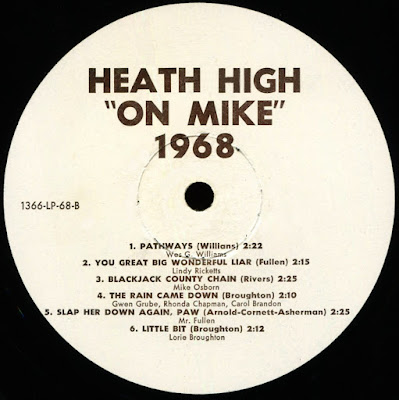 At Popsike.com, we learn that this LP sold for $114 in January of last year.  Cost me 99 cents at Goodwill (open, but still in shrink wrap), and I almost didn't buy it!  But it looked interesting enough, so I got it.  And, boy, is it.

Heath High School is about a 20-minute drive from my house (I grew up in NW Ohio but feel pretty much at home here now).  Probably a shorter drive back in 1968, when there were fewer cars on the road, at least around these parts.  1968 was the year when James Delbert Fullen, now 89, supervised this recording of Heath High student musicians, 35 of whom participated, all members of the Folk Singers club, save for the Heath High Chorus and Brass Band, who do a decent high-schoolish rendition of Up, up and Away.  My Spell Checker tells me "high-schoolish" isn't a word, but I say it is.  Anyway, this LP was recorded in monaural sound at King Studios in Cincinnati, and the sound is decent, though the pressing is typical King--as in, could have been a lot better.

We'll start with Fullen, a one-time country star who, starting in the late 1950s, recorded professionally as "Jimmie John."  (It's not his fault that Jimmy John's would show up in 1983 to confuse the issue.)  Here's s listing of Fullen/John singles.  eBay ads tout his singles as rockabilly--even, in one instance, as "insane 1958 rockabilly bop"--but they all sound like regular country to me.  In classic vanity style, Fullen wrote two numbers for this effort, and he sings the charming 1948 novelty Slap Her Down Again, Paw (aka Slap 'Er Down, Agin, Paw), apparently an acceptable choice for a central Ohio high school LP in 1968.  His own songs--School of Love and You Great Big Wonderful Liar (sung by Lindy Ricketts, who, I hate to report, passed away last year)--are way better, the second tittle sounding like country of the era and the former more or less like a regular '60s novelty, its sexist air only helping in that regard.  Why Fullen didn't devote the entire LP to student originals and covers, I don't know.  Anyway, here's an early pic of Delbert Fullen/Jimmie John which I found (where else?) on line: 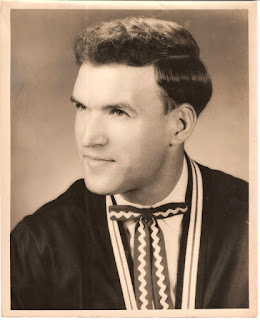 The Newark Advocate (of Ohio, of course) printed an April 4, 1968 piece on this LP, and I had to get a month's e-subscription to the paper to access the archives for a readable clip.  Arrgh.  Anyway, Amateurs Turn Out Pro LP, reads the headline.  "A group of 35 supposed amateur musicians and vocalists has turned out a very professional recording--'Heath High on Mike 1968.'"  The students "have created a product worthy of being judged on professional standards."  The writer, George Finley, felt that it was a "not too risky prediction" that "with proper promotion, Heath High's Folk Singers will have a hit or two on their hands."  I don't think that happened, in part because the LP sales were limited to the school and to a performance at the Heath Cake Festival.  (There's a Heath Cake Festival?)

The Advocate piece gets the record sides reversed, for some reason, naming Wes G. Williams' Pathways as the opening track and describing it as a soul number, though it's clearly folk-rock (and very nicely done).  Myron Smith's instrumental original Hold It, the actual first number, is deemed "an amazingly well done instrumental," and that's my reaction exactly.  Closer to 1966 than 1968 in style, it's nevertheless superior garage band stuff, with highly assured musicianship.  Sound-wise, it's unusually well-balanced for such an effort, so even if King's pressings sucked, their engineering was fine.  What can I offer as a general assessment of the Folk Singers' tracks?  (And why "Folk Singers," by the way?)  Just that they're all well done and great fun (too fun, as the saying goes), despite Mike Osborne's iffy vocal on Blackjack Country Chain (an actual country song, despite its made-up-on-the-spot sound, probably a result of half-memorized lyrics).  "Arrangements and instrumentation relying heavily on guitars and percussion are far superior than would ordinarily be expected," claims Finley, and I can't argue with that.

I almost failed to find Fullen's country career on line, as the Advocate piece mistakenly gave his country pseudonym as "Jimmy John," but I tried "Jimmie" and struck pay dirt.  I are smart.

The back jacket is blank, so I saw no point in scanning it.  According to last year's eBay ad, "This is a rare record, there is no history of it online."  Wrong!

"According to Fullen, the record is a training experience nearly all of the students had not experienced."--Advocate.  Umm, right.  To the extremely interesting LP.  Oh, and did I mention Tim Fannin and the Sites of Sound's Through the Suns of My Mind?  It's not only a 9 out of 10 on the garage scale, it beautifully makes no sense at all.  Pure psychedelia, in other words.  Rendering the inclusion of Slap 'Er Down all the more trippy by contrast.  Cornball Arthur Godfrey country, psychedelia, folk-pop, Jimmy Webb--how can you lose?

Posted by Lee Hartsfeld at 5:42 PM

What a gem! I imagine the Popsike valuation is based on "Through the Suns of My Mind" (a very 1968 title) rather than "Slap Her Down Again, Paw." It sure seems odd that country singer Fullen would choose an offensive Arthur Godfrey novelty as his solo contribution. How did that guy (Godfrey, that is) ever become popular?

Yes, Fullen's choice is weird. If he was going to make this a semi-vanity LP, you'd think he'd... not pick that for his own number. It suits his nasal tenor, though. And it's jerky to stick two of your own compositions on an LP allegedly intended to showcase student talent.

I've always wanted to type "it suits his nasal tenor."

I have no idea how Godfrey became popular. I'm glad people came to see what a jerk he was following his treatment of Julius La Rosa. I'll be crucified for this, but I could never stand Johnny Carson--he seemed to have been the same petty type. Never did a funny monologue, had no comedic skills I could recognize as such. And I hated everyone calling him "Johnny," as if they knew him personally.

At least Carson didn't grin like a possum and play the ukulele. He had those two assets.

Or sing the "Too Fat Polka" and "Slap Her Down Again, Pa".

Hmm, very interesting. I see an awful lot of these school (& church) records, and I never know if they're worth picking up. Unless there is Christmas content, then I have to grab it. :)

Like you, I never understood Arthur Godfrey’s popularity. When I was a pre-schooler, my mother used to listen to him in the morning and I found him unlikeable. (Around the same time, there was a Bing Crosby program which I loved.) A few years later, my grandmother was devoted to Godfrey’s television programs. By then I found him loathsome. Regarding his on-air firing of Julius LaRosa, I recall Godfrey issued a recording of recitation justifying the affair. (The last line, as I recall, was “I’m the only one here who’s indispensable.”)

Incidentally there was a novel called “The Great Man” about the death of a popular radio commentator, which was said at the time to be based on Arthur Godfrey. It was made into a film with Jose Ferrer as a reporter trying — and failing — to find any of the dead man’s former colleagues with a good word to say about him.

To be fair, the Godfrey variety show did feature some very fine talent. For one, there was the singing group, The Mariners. Their one big hit recording, “I See the Moon”, written by Meredith Willson, is well worth downloading here:
https://archive.org/details/78_i-see-the-moon_the-mariners-m-wilson-david-rhodes_gbia0121865b

Thanks for the link, and I'll have to check out that film. Apparently, "A Face in the Crowd" is based, in part, on Arthur. The Wikipedia piece on Godfrey doesn't hold back....

A Face In The Crowd is a great film. A whole side of Andy Griffith you just don't expect.

Thanx for this oddity. In all fairness to Arthur Godfrey, who I didn't care much for, he did fill a needed role during his hey-day, as a conduit for new aspiring entertainers. He was also the inspiration for a very young & very ill child in Philadelphia; one Humble Harve Miller, who wanted to be just like Mr. Godfry, when he listened to his radio broadcasts & first saw his early TV shows.

If you read about Godfrey, he supposedly was popular because he was the first to be folksy and unscripted, and to make fun of the sponsors' products. It seems to me that others did the same thing at the same time or before - Will Rogers with the folksy bit, Henry Morgan with the sponsor tweaking, etc. But perhaps I am not giving him his due because he wasn't likeable.

A lot of celebs are a mixture of good and bad qualities. Godfrey's stand against his sponsors, who didn't want the Mariners on his show, was a good thing, of course, though I read that Godfrey later caved. I've read that Eddie Cantor, a friend of Sammy Davis Jr., stood up in that fashion, too. Come to think of it, Perry Como, also.

For a long time, I thought Johnny Carson--who I cannot stand--originated that routine of messing with his sponsors. My born-in-1957 perception!

I am really impressed with the musicianship and quality of this album put together by high school students from a typical high school.