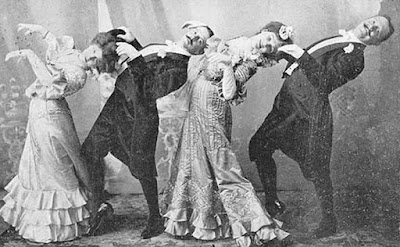 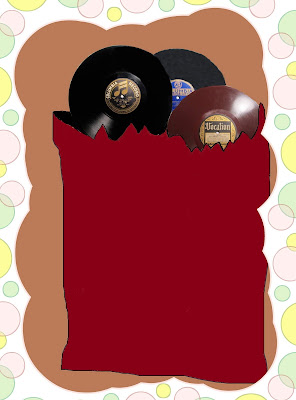 "I love a sailor, the sailor loves me, And sails ev'ry night to my home.  He's not a sailor that sails o'er the sea, Or over the wild, briny foam; For he owns an airship and sails on high...."  So starts Come Take a Trip in My Airship, sung by J.W. Myers--Mr. J.W. Myers.  "Just idly sailing and watching the clouds, He asked me if I'd name the day.  And right near the dipper I gave him my heart, The sun shines on our honeymoon...."  Since gay marriage was not an accepted thing in 1904, what's a guy doing, singing the woman's part?  Well, even as late as the 1920s, vocalists weren't necessarily gender-matched, lyrics-wise.  I had, or used to have, a male vocalist providing the vocal refrain to The Man I Love.  Different times, different traditions.

Which leads to my introduction to Mixed Bags, my Halloween series--one which will see a three-day or so delay after this first bag, but these treats should hold everyone that long, I hope.  I'll be offering novelties, mostly, along with sides that simply haven't dated very well, and others that are tacky or inadequate in entertaining ways--pretty much, like many of my blog's usual offerings.  The thing is, I've run out of traditional Halloween tracks, and I've mostly been recycling each October.  I thought I'd do something different this season.  Today's playlist features shellac goodies, save for one vinyl rip.

And the season has hit, of course.  I'm lucky to be in an area not experiencing damaging winds and rain--just gloomy skies, drizzle, and a warm-one-day, cold-the-other pattern that keeps my sinuses in suspense.  Either my head is less stuffed today (it's mostly clear out), or else I've just gotten used to the congestion.  Dunno.

Anyway, I finally landed a restorable copy of Paul Whiteman's The Hoodoo Man, superbly arranged by Ferde Grofe, and it's the one standard Halloween-style track, here--and a great one.  The Arkansaw Traveler--Parody by Arthur Pryor's Band is a parody on (you'll never guess) The Arkansaw Traveler.  Now, I don't know if Arkansaw was simply an accepted alternate spelling back in the day, or if it was meant for "rube" effect--i.e., to suggest something rustic and primitive (like the outrageously awful-on-purpose Len Spencer Arkansaw Travler, further down in the list).  My bet would be that the w was meant to suggest an older, "rube" spelling, but that's just my bet.  The 1908 Spencer side is spoken, with fiddle asides (I forget who the fiddler is purported to be), and it dates back to a 19th century stage routine which was longer and possibly cornier.  My copy is a 10-inch Victor reissue of an 8-inch side, so I'm sure they had to shave off some of the deliberately (?) terrible punchlines.

God's Elevator is a track I just had to include because of the name.  Otherwise, good, ordinary bluegrass gospel--except for that title.  The LP was trashed, but Vinyl Studio did miracles with it.  And I could have called this playlist A Billy Murray Halloween, since Billy is all over it--two solos, a vocal refrain for Jean Goldkette, and two doses of Billy with The American Quartet.  Murray, btw, did his own version of Come Take a Trip in My Airship, and I wish I had that one--though two helpings of that number might be one too many.  Anyway, Billy's I Love Me is a novelty masterpiece that I first featured years ago, and Alcoholic Blues--a novelty about Prohibition--is a blog premiere.  Murray emotes like crazy on the second title.  When it came to selling a song's lyrics, the man never held back.

And we get several vintage country sides.  I just have to cite this passage from the first installment of Ken Burn's history of country music, regarding pre-1923 commercial sound recordings: "Most of the music available to (the public) was by 'high brow' artists like opera tenor Enrico Caruso."  That's news to Billy Murray, Al Jolson, Henry Burr, the scores of hugely popular quartets, Arthur Pryor, Paul Whiteman, and Ted Lewis.  Oh, well, it's just PBS.  It's not like their goal is to educate or anything.

Old Timers, by the Bar Harbor Society Orchestra, is a 1922 medley of "old" songs, and someone should send Ken a copy.  And, speaking of copies, I wish I had a better one of Goodbye, My Honey, I'm Gone, which is very cool old-timey country by the Pickard Family, with "yellow fellow" ("fella"?) as part of the lyrics, which gives away the song's African-American origins.  "Yellow," we'll recall, is a word for a fair-skinned black person.  As in The Yellow Rose of Texas, for instance.

You're Bound to Look Like a Monkey (When You Grow Old) has an African-American origin, too--Bob Crosby's superb version was not the first.  And it certainly doesn't have to be taken as a racist kind of thing--the lyrics are too hilarious to quibble over.  Two 1927 polkas end the playlist, and... what else did I want to note?  Oh, yeah--note "I hear the train a'comin'" in the famous Appalachian folk ballad Rovin' Gambler.  And notice the Spike Jones/Doodles Weaver-style fake horse race at the end of Georgie Price's Barney Google.  And note that the superbly performed The Man from the South was a collaboration between Rube Bloom and Harry (I'm Looking Over a Four Leaf Clover) Woods.  Goodies galore--and I've always wanted to type that.

Everyday these 78s get rarer and rarer. In the Sayre fire in 2008 in Los Angeles, my friend lost his gigantic 78 record collection. Just this week the same area was hit with an identical fire! I have learned my lesson and moved to Ohio where it's much safer!
My friends real honestly name was Daniel Boone. He took a lot of flack as a youngster. Thanks Lee, great mix!

Quite the mixed bag here. I just don't have the patience to deal with the 78s too much. They seem to take so long compared to LPs. I'm glad you're willing to take the time and invest the effort to keep these things alive!

Yikes! So sorry to hear about your friend. Ohio probably is the safer bet. Yes, I can imagine lots of kids sang the TV theme around him. Hope they didn't come up with any dirty puns. Pat Boone is related to the real Daniel, many generations removed. Just thought I'd toss that in.

Thanks, and hope you enjoy the tunes!

Big fun. A lot of these do have a Spike Jones "feel" to them, humor wise - from an era when humor was actually funny. Looking forward to the next installment. Thanks a lot!

Ever thought about writing ad copy Lee? Your buildup for these folders is top-shelf (and I like some of this stuff anyway), so I had to get it LOL! Haven't checked out everything contained therein yet, but I need to comment already. I like the pickin' on God's Elevator, but it's kinda different, to say the least. Not one I'd feature on an SMG, but if you do later, I'll understand why LOL! Was that a Gospel album? HMMMM.
I read somewhere, that the reason Kelly Harrell didn't put out that many records, was because he didn't bring his own musicians. IMHO, if he had-a-done so, the studio/musicians wouldn't-a-made him out like another Vernon Dalhart (sp), which he was not, no disrespect to either singer, you understand. He did record a twelve-inch version of Wreck Of The Old Ninety Seven (is that the way it's worded), which I've only heard once BTW.
I'd say The Arkansaw Traveler, was the inspiration for The Stanley Brothers' How Far To Little Rock. I heard Carter Stanley say in an interview, that they learned it from a house painter from their neck of the woods years before and snuck it in at the last minute, after the recording executives got their song quota in one night. I believe the exects wanted seventeen cuts, but they always tried to one-up on them and that was their result that time LOL! There are actually two Stanley Bros Little Rocks, the second much slower, in a different key and features (I believe if memory serves me correctly) fiddle or mandolin pickin'. Some good stuff here, love and prayin' for ya!

Happy HaLEEween, Lee
I love your home made illustrations
Those 78rpm's in the bag fit nicely
I'm sure I'll enjoy the music as much
but who couldn't love a bag o' 78rpm's
Nice Seasonal change of pace, I miss
those earlier than early records o' yours
I'm commencing to downloading now.
Take Good Care, hope your springtime allergies
are done and done. I remember DrDemento playing
a Eddie Cantor 78rpm of 'I Love Me' which is a
great version also, Any and All Billy Murray sides are
primo in my record book, Sir Hartsfeld
Byron Dick

Thanks, everyone. Problems with PC and now with blogger PW. Good grief.

Appreciate all the comments, and I had more to say, but I lost two replies. Thanks, Byron, for your usual clever comment--Marie, hope the playlist lived up to your expectations--Josh, thanks for the fascinating info--and Larry, you're spot on--the 20s was the big inspiration for Spike Jones. I once saw a 1930 musical short by one of the popular bands of the time--Jan Garber's, maybe?--and it was pure Spike Jones, only 10 years earlier. You may know that two of Jones' most important and brilliant musicians--Red Ingle and arranger Country Washburne--were from Ted Weem's Orch.

No time to pre-prepare stuff for tomorrow! But things should get back on schedule now, if the electronics behave!

Lee,
I totally understand on the blog emails not working, didn't find replies to this post 'til I checked Spam yesterday ARGH! Oh and still waiting for comments I've posted on gbugrb to show up;
Here are the two Stanley Brothers' Little Rocks.

How Far To Little Rock https://www.youtube.com/watch?v=OOQ_zrG78Vc

Still Trying To Get To Little Rock https://www.youtube.com/watch?v=leIbYvbSMxg

Oh and I believe that is Chubby (don't know his real name) Anthony doing that fiddle pickin', similar to his Black Mountain Blues (Rag) treatment, I like it though!