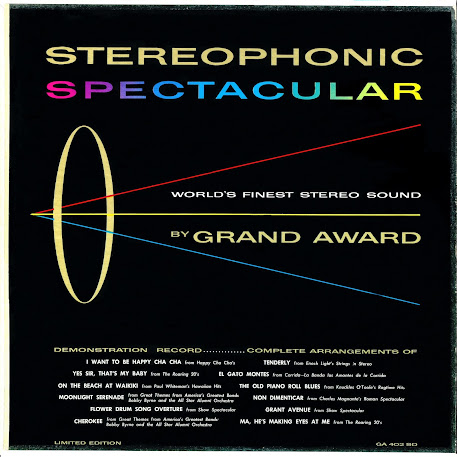 A limited edition Stereo "Phase X" sampler from 1959--post-Waldorf Enoch Light.  "In your travels throughout the world--Australia, Germany, Hong Kong, Singapore, or on the Rue de la Paix--you will find that Grand Award Recorded Sound is enjoyed and treasured by the person who demands 'Perfection in Sound.'"  Just have your phonograph with you at all times.  On the Rue de la Paix... 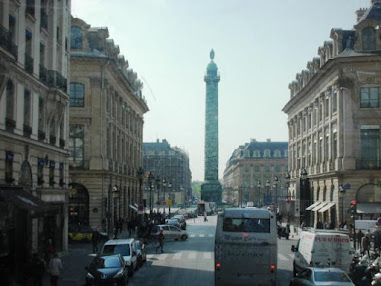 "Umm, er, I really need to get back home..."  "Yes, but not until you have provided us with 'Perfection in Sound.'  We demand it."

The roaring 20's, Hawaiian hits, Rodgers and Hammerstein, bullfight music, the Torchy Thirties, Cha Cha's, accordion sounds from Italy, and Dvorak's New World Symphony.  Except there's no Dvorak.  I guess that makes this LP a less than perfect demonstration of Perfection in Sound, but when it's the world's finest stereo sound, who can quibble?  Well, some folks may have.  Let's take a peek back in time--back to 1959...

"Honey, there's no Dvorak on here."  "Well, it's just a sampler."  "Yeah, but they show the album jacket on the back.  I'm going to complain."  "Well, make sure you do it through the proper channels.  Ha, ha!  Get it?  Channels?"
Even if none of this music is proper Space Age Pop, the "Phase X" stereo would make it so.  I'm pretty much on the same page as David when it comes to stereo--I regard it as a menace to 1950s and 1960s pop, generally speaking.  There are exceptions, however.  Well, I can think of one.  I have Guy Mitchell's Heartaches by the Number in stereo, which sounds great, and there are early Who and Rolling Stones tracks I prefer in stereo.  Plus, later Beatles, the Hollies, and select early Beach Boys sides.  But, generally, mono is my preference, at least until it started sounding less engineered.  I think I'm still suffering trauma from my stereo copy of Eugene Ormandy's superb 1958 version of Grand Canyon Suite, which can only be described as, "What were they thinking?"  The mono has a million times more punch.
But we were talking about Grand Award.  Someone was, anyway.   This is 1959, and so there's no mention of Waldorf anywhere on the jacket or label--Enoch Light had left Waldorf (and its fun but chintzy 18 Top Hits EPs) behind.  By "chintzy," I mean the vinyl--many of those EPs were well done, but the vinyl quality was dreadful.  No more junk vinyl, no more mail-order packages (unless this was mail order)--just wonderful, spectacular, glorious "Phase X" stereo.
My verdict on the stereo?  For its day, very good.  The engineers didn't mess with the sound (pointlessly panning anything, or the like), and while I find the separation a bit too artificial, Grand Award's "spectacular" version was still better than the norm--to my aging ears, anyway.  In this demonstration record, which (in tiny print) is identified as Volume 2, we get mostly big band, Twenties, Broadway, and easy listening, though the back cover shows a greater variety of genres.  I didn't notice any "torchy Thirties," for example, but maybe I wasn't listening closely enough.
Every time I encounter a budget-label promo, I have to wonder if anyone actually read the hype--I mean, really read it.  Whether anyone sat around the table and discussed it.  "I enjoy and treasure GA's stereo sound."--Dad. "Well, I don't."--Son.  "Of course not --you like that rock and roll junk.  They don't even engineer that noise--they simply turn the knobs all the way up.  Someday, you'll learn to appreciate real music--real high fidelity."--Dad.  "That's Squaresville.  Dion, Fabian, the Falcons, and Frankie Ford are the most, Dad.  I mean Daddy-o."--Son.  "The most what?"--Dad.  "I don't have to take this."--Son, leaving the table.  "Hey, show some respect."--Dad.  "Let it go, honey."--Mom.
Meanwhile, I'm almost done with a Top Hit Tunes follow-up, but EP-compilation posts take forever to finish...  Meanwhile, I wonder if the "SD" in this Grand Award catalog number stood for "Stereo Demonstration"?  And, in the interest of not mixing moral judgements with my pop music history, I won't call out Enoch Light for making dough from all those rock and roll fakes, only to turn his back on the music when it came time for serious, glorious, spectacular Grand Award stereo.  He could have at least gotten Artie Malvin, Loren Becker, and the Brigadiers together for a "Wonderful Days of Fake Hits" stereophonic extravaganza.  With So-and-So and His All Star Rockers.  As a thank-you to all the Top Hit Club members.

At least we get a more or less fake hit with the I Want to Be Happy Cha Cha (originally the Tommy Dorsey Orchestra starring Warren Covington).  I say "more or less," because the Covington hit was actually the Tea for Two Cha-Cha--but why get technical?  Covington sounded downright sluggish next to Enoch's cash-in. 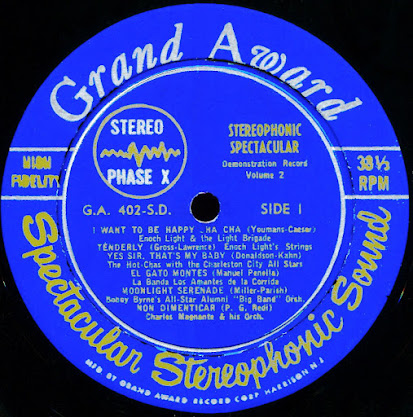 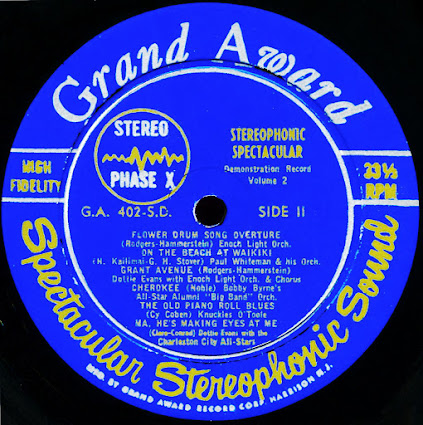 I love these hi-fi and stereo demo records! I've bought a ton of them over the years, but I don't recognize this one. Thanks!

By an amazing coincidence, in my travels throughout the world--Australia, Germany, Hong Kong, Singapore, or on the Rue de la Paix--I too have found that Grand Award Recorded Sound is enjoyed and treasured by the person who demands "Perfection in Sound"! And I am sure I will enjoy and treasure this compilation, for which I thank you.

I'm sure this will turn out to be the most spectacular! I was happy to find it in such fine condition. Maybe the original owner wasn't dazzled by it. Anyway, someone took very good care of this.

You're welcome. This release has me wondering why Knuckles O'Toole isn't showing up more often in the thrift bins. I've actually been hoping to find one or two of his efforts, but no luck. His absence from the thrift rows seems kind of weird. Maybe he's in such demand around the world that his LPs fail to reach the thrifts.

I always thought that "Knuckles O'Toole" name sounded more like an Irish prizefighter than a piano-player. What, does he play with his knuckles?

I avoid those good-timey pianists. I must have seen too many piano players affecting bowler hats and sleeve garters when I was a young TV viewer.

I wondered the exact same thing about ol' Knuckles. I mean, that would be a major feat. I assume he was a copy of Crazy Otto? And I take it you don't have a stash of Jo Ann Castle titles?

No, Castle was another member of the Welk troupe that I avoided.

Elitist! But, seriously, same here. Never questioned her ability--just have no taste for sped-up ragtime. The playing-for-speed ragtime pianists always miss half the octave bass notes, anyway--drives me nuts. And they have to put on that "I'm having a great time!!" look. So we don't conclude they're thinking of cashing it in, I guess. YouTube is full of good pianists racing through ragtime and flubbing every fourth note, and it's an affront to piano playing.

I'm no ragtime expert, but isn't Scott Joplin's music generally supposed to be played at a moderate speed?

Yes, that's true. Joplin didn't want it played at a rapid tempo. But I guess the ragtime folks do what the crowd comes to hear--fast syncopation! Moderate tempos usually suit it best, imo, since ragtime is so melody-based. It's easy to blur the melodies/strains at fast tempos--something the show-offy players almost always do. I've always wondered about the common wisdom that "classic" ragtime takes off from marches, since multiple strains (and the modulations involved) were common to forms other than traditional marches--waltzes, for one huge example.

Lee, you should always make requests for your various needs. I've come across a half-dozen Knuckles O'Toole LPs! If only I'd known they'd have a home with you...

Thanks! Actually, I'm only half-serious about Knuckles. Then again, if I heard one of his LPs, I might fall in love with his stuff. I appreciate it--your thrifting venues seem so much better stocked than mine.

Hi Lee,
Thanks for this Enoch Light. I think Volume 1 is very hard to find. I have another copy of Volume 2 already, but it is always good to get a better version/copy. Again thanks for it.
Billy Rowland, Richard Hyman, or others (it seems) used the pseudonym "Knuckles O'Toole". They are very nice LPs if you like Honky Tonk music. I have 3 different versions called "Plays Honky Tonk Piano" plus the LP "Goes to Paris". The first three I prefer over "Goes to Paris" only because the sound quality is so much better on these. Also, Sing A Song with Knuckles O'Toole & Gang Volume 1 - sounds like Mitch Miller and the Gang. Probably the Mitch Gang moonlighting on this Knuckles LPs. Sing-a-longs are fun. I have a Bing Crosby sing-a-long too. All were required as mp3's. Bryan

I used to have that Bing LP, many years ago! The budget labels went nuts with the sing-along craze, of course. Masterseal, Palace, Golden Tone, etc. Thanks for the info on Knuckles O'Toole. I have a copy of Volume 1 on the way from eBay, and I was hoping it would show up today--but our "president" is trying to put the postal service out of action, so there are delays. Vol. 1 has Jayne Mansfield on the cover, right? Light and Lopez are on it.

And I just recalled one of the horror stories of pop music history--Alvin and the Chipmunks did a sing-along--"Let's All Sing with the Chipmunks," 1959. I'm sure you've heard of it. I've never owned it, and never will! As a kid, I found the Chipmunks hilarious in their TV cartoons. Today, I can't remotely fathom why I found them funny. It's a kid thing. We have to respect children's culture, to remember how things looked and sounded when (as the Scots say) we were wee... Thanks for dropping in!